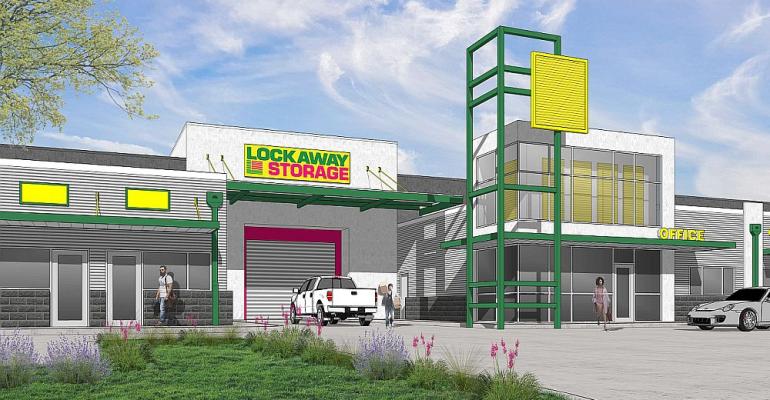 Transforming a beloved San Antonio grocery store into a vibrant self-storage facility came with a host of challenges, but Lockaway Storage ultimately pays homage to its origins while offering the community a diverse set of storage offerings.

As the self-storage industry has grown, sites in desirable locations have become more difficult to find. This was the case for Tom Brundage, owner of Brundage Management Co. When seeking a property last year on which to build Lockaway Storage, he reverted to an analysis of infill sites, which led to the acquisition of a unique building in South San Antonio.

The site was a former Centeno Supermarket built off Interstate Highway 35, which stretches from Laredo, Texas, near the Mexico border, to Duluth, Minn. At one time, Centeno was the largest independent grocer in the city, known for serving a predominantly Hispanic population. This particular property was the third store in the chain.

Constructed in the 1970s, the building remained in operation until the early ‘90s, when it was transformed into a flea market and after-hours dance hall. It’s always been a destination for the community, whether for food, shopping or dancing … And now for self-storage. The developer’s ability to see past the previous uses while embracing the structure’s history was truly visionary. Let’s look at this self-storage conversion in more detail.

Evaluating and Prepping the Building

During the due-diligence period, it was decided that a hybrid design-build approach would be used on the project and the owner would serve as general contractor. Our firm, including our structural engineer, and the construction manager conducted a complete building analysis to supplement a series of independent reviews that had already been done by subcontracting companies. Our goal was to determine the options for reusing and readapting the building’s existing systems and equipment.

We started by looking at the building envelope, including the roof and walls. The structure was deemed adequate to support the load requirements for self-storage. The structural beams, columns and concrete masonry walls were sound; the latter just needed some sealant and a new coat of paint. Even the roof was acceptable with minor repairs, and we were able to salvage the plumbing lines. Finally, the air-conditioning units could be serviced instead of replaced, and we were able to rework the electrical. All this allowed us to save on costs. 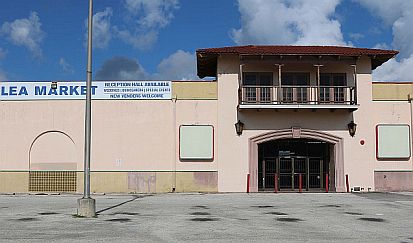 As we dove into the interior, though, we realized there was some hazardous-materials abatement to be done during the first phase, which added to the construction timeline. Selective demolition of various interior elements was also dovetailed into this phase. We ultimately tore down some mezzanines and decaying entryways, and removed the unnecessary restrooms and flea-market space.

The biggest hurdle was razing the two entry elements, which were made of concrete, stucco, glazing and dilapidated heavy timber, without jeopardizing the integrity of the remaining structure. With teamwork, we were able to get it done successfully and create 72,000 square feet of space for climate-controlled storage.

We performed a building-code analysis during the due-diligence phase. It was multi-faceted and required interpretation with the city, but it included master planning of the entire site with the civil engineer to determine what storage products could be built in addition to climate-controlled space. We settled on several. 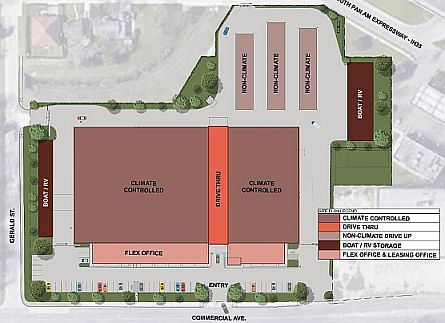 The primary façade was earmarked for the leasing office and a series of flex-office spaces, but the highlight of the development is a state-of-the-art, multi-lane, drive-through promenade that slices through the center of the structure. Flanked on both sides by climate-controlled storage units of various sizes, it’s one-of-a-kind in the self-storage industry thanks to the timber and roof deck, which were recycled from the original building. We were also able to maintain clerestory windows along the full length of the drive.

Next, we cut four loading areas to meet exiting and travel-distance concerns for life safety. At the far sides and back of the property, we built three traditional, drive-up storage buildings and two much taller, fully enclosed vehicle-storage structures for boats and RVs.Establishing a Vibrant, Fiesta Vibe

Establishing the aesthetics was our next task, and we felt the design should reflect the building’s roots within the Hispanic community. We added a base, body and cap around the existing structure, and then changed the original earth-tone color scheme to a contemporary gray with green accents. This banding was supplemented by an emphasis on the pre-existing arched stucco elements that dated back to the Centeno days.

With gray and green as our base, we layered in two other Lockaway colors—hot pink and bright yellow—to add vibrancy and create a fiesta vibe. The office and promenade are highlighted with white stucco, an homage to South Texas. The high-speed roll-up doors along the promenade are surrounded by pink stucco.

A continuous steel canopy floats above the drive-through entry, giving tenants protection from the elements. We also installed a series of canopies and glazing along the flex-office spaces, leading customers from the end of the building to the two-story leasing office. The office displays roll-up doors behind glass on the second story as well as a steel tower with a vibrant yellow door as an accent. 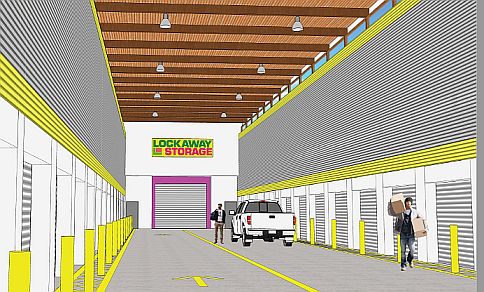 A rendering of the drive-through promenade

Security is a necessity for any self-storage project, and Lockaway is no exception. The owner wanted to retain direct access to the flex-office spaces from the parking lot but added a keypad-enabled security gate and wrought-iron fencing around the rest of the building. The larger property has two keypad-enabled access gates, plus two keypad-enabled exits to ease traffic flow, especially for large boats and RVs. One exit is adjacent to the neighborhood, while the other connects directly to the interstate.

All door locks are keyless and connected to the facility-management software. There are lights mounted on the building to shine on the driveways. There are also security cameras positioned from all angles and at each of the entries.

In the end, Lockaway was designed to offer multiple types of self-storage: traditional drive-up (no climate control), interior climate-controlled units, drive-up boat/RV storage, flex-office space, and a unique mix of drive-up, climate-controlled storage. Tying the design to the Hispanic heritage of the Centeno Supermarket with material and color selection, and reusing the original heavy timber resulted in a one-of-a-kind project. The conversion is set to open this summer and will have groundbreaking diversity in leasing options!

Planning a Self-Storage Conversion? Here Are the 4 Biggest Expenses to Expect and Ways to Ease That Pain
Feb 09, 2022