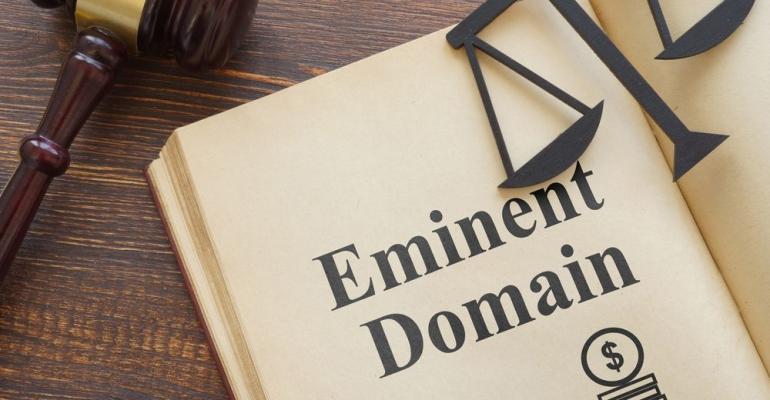 Just because you own a self-storage property doesn’t mean it can’t be taken away from you by force. This article explains the government’s right to exercise eminent domain and offers pointers for the facility owner whose facility is targeted.

Anyone in the self-storage business should be at least somewhat familiar with eminent domain, which is when the government takes private property and converts it to public use without the owner’s consent. Officials can exercise this right when they require land for development projects that benefit society such as schools, hospitals and highways, or to simply remove properties they deem blighted.

As self-storage facilities are often near throughfares managed by a jurisdictional department of transportation (DOT), they’re particularly prone to being in the right of way for road-expansion projects. In addition, since this asset class generates little from sales and wage taxes, the government can more easily justify the financial case of replacing a storage facility with a business that’ll generate more taxes and jobs.

Let’s look at how the eminent-domain process works and some steps you can take to minimize the hardship caused should you be targeted.

The move to pinpoint a property for eminent domain usually occurs after local agencies study numerous approaches to a project and select the one that, in their opinion, best balances the need for safety and efficiency. Owners are often first made aware of an issue when they receive a notice of right-of-way acquisition, particularly if they haven’t attended any meetings in which the development was discussed.

Unfortunately, though the “Takings Clause” of the U.S. Constitution’s Fifth Amendment maintains that eminent domain can only occur if the government provides “just compensation,” it doesn’t specify the method for determining property value. Once notification has been issued, the next step is a property appraisal to determine reimbursement. You can usually assign a representative to be present for this. You can also complete and submit your own appraisal as a counteroffer for review, but this must be done at your own expense.

It should be noted that business profits and losses are non-compensable. In some cases, relocation expenses can be minimally offset in an eminent-domain case, but since self-storage is a unique building type with many tenants, this solution hardly seems feasible in most instances. After all, there isn’t typically a vacant self-storage property nearby to which an owner and their customers could move.

From Acquisition to Seizure

If a right-of-way acquisition can’t be successfully negotiated, the government can move to seize your private property for “the public good” by filing a condemnation petition. This happened in 2012 to Tuck-It-Away Storage of Manhattanville, New York. Columbia University bought the surrounding buildings and elected not to renew their leases, which essentially made them abandoned. The university then commissioned a study that found the neighborhood to be blighted, which set the stage for eminent domain to take place.

The self-storage owner in this case was initially successful in appealing the blighted-property designation by arguing the approach used to make that determination was unconstitutional. However, the developer ultimately prevailed. The New York Court of Appeals upheld the designation and ruled that the future project met a “civic purpose,” thereby allowing the state to seize the property.

For property owners who are targeted, it understandably seems unfair to have little to no say in the eminent-domain process, particularly when you stand to lose the real estate value of your asset as well as any future generation of revenue. Though it may appear there’s little protection available to you in these circumstances, there are ways to minimize the impact to your bottom line.

Your best defense begins with preliminary research. Prior to purchasing a self-storage property, conduct due diligence to determine if there are any current or future plans that could place the site in the right of way of a government project. Sellers can be less than forthcoming if a right-of-way acquisition has been proposed, but this information is sometimes included in third-party zoning reports.

Know Your Right of Way

Another important consideration is whether your target property is in the right of way for improvements, as this may negatively impact site access and operation. Many states have robust DOT websites that can clue you in to planned road expansions. Knowing items that may affect your property allows you to scrutinize their severity and factor them into your revenue projections.

For example, we recently discovered that a self-storage property under contract was slated to have road improvements that would impact both entrances. We were able to build that into our financial model to minimize the hit to revenue and create more realistic projections.

One prudent move is to open early communication with the DOT. This allows you to keep close tabs on their timelines and work with a project manager to maintain as much access to your property as possible during construction. Many municipalities also post long-range development plans on their planning-and-zoning websites that allow you to see what’s envisioned for the area. This can give you an indication of the direction they’d like to see the city grow.

Though this information can provide some insight to whether your planned or current self-storage property may be in the crosshairs, keep in mind that municipal plans typically change a lot between inception and ground-breaking. Thus, it often can be difficult to gauge the potential long-term effects on your asset.

Protect What You Can

Though having the above knowledge can’t prevent the government from using eminent domain to take your self-storage property, you can minimize your losses. Bringing a well-versed lawyer into the mix early in the process can be extremely beneficial in negotiating maximum compensation. In fact, there are experienced real estate attorneys who specialize in eminent domain, and they can be of critical assistance in navigating the process. Plus, any government entity will have a deft legal team of its own, so you’d be remiss to forgo your own representation.

If possible, completing facility upgrades and deferred maintenance prior to eminent domain being filed can increase the compensation you receive. Being engaged in the process as much as possible will benefit you in the long run.

If faced with the prospect of losing your self-storage property, you may be tempted to let others handle the process; however, no one knows the facility better than you or has more on the line. Being proactive with your eyes open can help you avoid future hardship and lessen the impact should your property be targeted.

Ara Nenninger is the entitlements manager for Spartan Investment Group LLC, which operates the FreeUp Self Storage brand. Founded in 2014 and based in Golden, Colorado, Spartan syndicates investor capital to develop real estate. Its network of more than 5,000 investors has raised more than $140 million to amass its self-storage portfolio of 51 facilities across 10 states. For more information, call 866.375.4438; email [email protected].