Groupthink: A Look Inside Self-Storage Mastermind Programs as a Path to Ownership and Investment 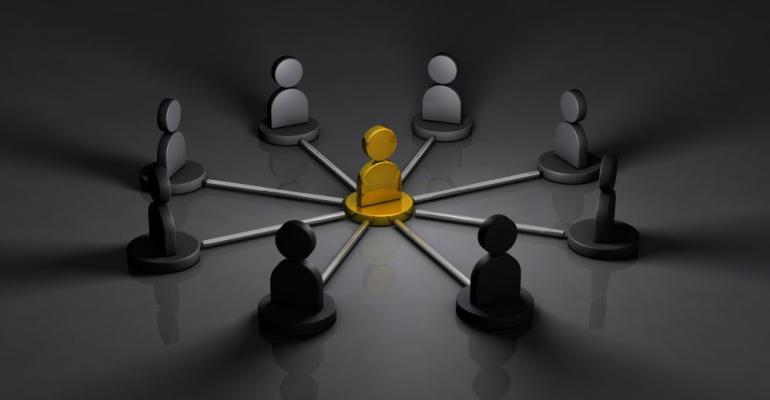 Finding your footing in the self-storage investment market and launching a new business can be tough, especially if you’re walking that path alone. It might make sense to consider the support and resources available through industry mastermind groups.

Editor’s note: This article is for information purposes only and should not be viewed as an endorsement by Inside Self-Storage or any of its partners.

I don’t know about you, but for some reason my Facebook feed is filled with ads selling mastermind groups led by everyone from Steve Martin to David Sedaris. I’ve always ignored them, thinking peer-to-peer mentoring was something people did for fun if they had lots of free time. Recently, though, while talking to one of my business mentors about issues I’ve been facing in developing my own self-storage projects, he suggested I join an industry mastermind program.

Self-storage mastermind groups? I didn’t even know that was a thing, but there are actually several. In general, they’re designed to help people who are interested in building wealth through storage investing, providing education and mentorship on how to grow a business, source capital, structure deals, find development opportunities and operate assets. Some can lead to a formal business partnership in which the group has a minority stake in your venture. The cost to participate varies depending on the program and your level of commitment.

I sat down with the founders of four such groups to gain a better understanding of how peer-to-peer mentorship works. They are Scott Meyers of The Self Storage Mastermind, AJ Osborne of The Self Storage Income Inner Circle, Stacy Rossetti of StorageNerds and Mike Wagner of The Storage Rebellion. Here’s what they had to share.

Some groups, like Osborne’s and Rosetti’s, are open to people with all levels of experience. To join Meyers, you must be an active self-storage owner or other industry professional. Prospects must first interview with Meyers and Osborne before joining.

Wagner structured his group with three tiers, with the first open to anyone and the other two requiring an application. Education tools and engagement ramp up based on the tier. At the top level, the end goal is business partnership. “Our job is to take the students from purchase to stabilization of their first property,” Wagner says.

Rossetti’s program is focused primarily on those new to self-storage. It’s a one-year program designed to help members find and fund a deal and then teach them how to run the business. It includes an online course and two-hour webinar meetings via Zoom every other week. “We follow a three-step process: find them, fund and run them,” says Rossetti. “We’ve got people coming in every week in all different levels and ages. People come to the group and most of them have no idea what to do. All they know is that they want passive income/passive wealth.”

Participants in Meyers’ group meet once per quarter for three days and have a three-hour virtual check-in every other week. Though it’s technically an annual program, some members renew because Meyers focuses on a different area of the business each year. “We check the key performance indicators of each participant’s facilities and business levels,” Meyers says. “This year, we are focusing on the finance and private-equity side of the business.”

Though group size varies and there may be a cap on the number of participants, Osborne sees value in keeping membership low. Virtual meetings are typically held every other week, with content on a wide variety of topics driven by the member requests. “We have a high participation rate and a small mastermind,” he says. “I interview each potential member to ensure their level of commitment to the group before accepting their request. We do not want members jumping in and out. That’s not how it works. When people are joining, they should be actively engaged and an asset to the Inner Circle community.” 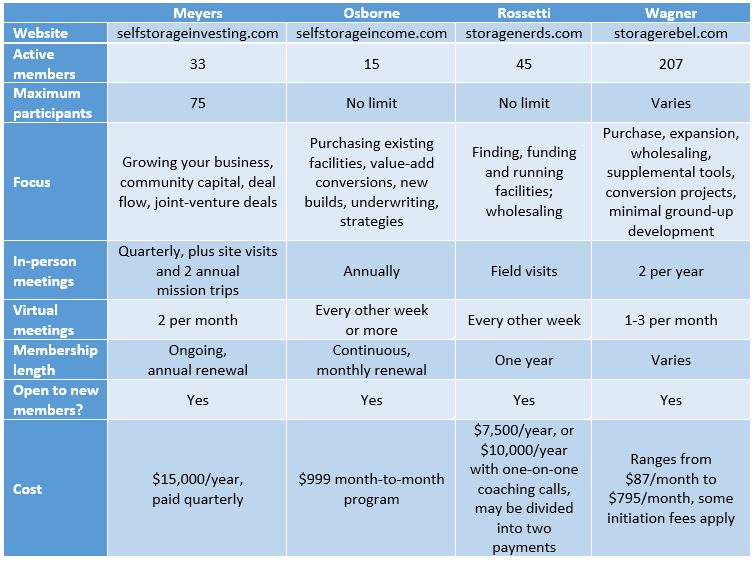 Means to an End

Though all the groups have similar end game in mind, in which participants become successful self-storage investors and operators, how people get there and who comes along as part of the collective journey can differ.

“We are very stringent in terms of who we let in,” says Meyers. “Just because someone can write a check doesn’t mean we’re letting them in. There is a level of integrity that we uphold, and that is driven by me because, otherwise, some would just join and sell during the program.”

Osborne believes members receive value from the collective experience. “We don’t sell you anything; we don’t do funneling. I don’t coach,” he says. “The Inner Circle is paid for by people who come to the table to learn. We have people who have 15 facilities and people who have no facilities, and they all come together.”

Ultimately, the driver is shared knowledge and purpose. “I’m helping people as much as I can,” says Rossetti. “I’m a true believer of giving. The more you give, the more opportunities will come to you.”

“As storage rebels, we believe very strongly that storage is a means to an end,” adds Wagner. “Not the end itself. We help our members think about what their ideal life would look like, [and] then we reverse-engineer a storage-investing business plan to support their life.”

All four mastermind leaders are proud of the success that’s emerged from their programs. The individual stories are a testament to the power of each group to help members achieve goals they may have struggled to achieve on their own.

Wagner has one member who’s acquired five properties for $3 million during his time in the group. Once stabilized, they’ll be worth more than $6 million. Another member contracted to buy 12 properties during a 14-month span. He kept seven for himself and wholesaled the other five for $280,000 in profit.

Some of Rossetti’s members have also found deals quickly. One who struggled for two years to purchase a multi-family property without success found a self-storage facility within a month of joining the group and closed after 45 days. He’s now under contract on his second property. Another member recently closed on her first asset after nine months in the program, acquiring a 110-unit facility for about $275,000, and is in the process of looking for her second.

One advantage a mastermind group can provide is the potential for business partnerships. Osborne wound up joining with a member in acquiring a 100,000-square-foot facility in Kansas City. “We got it locked up for $60 per square foot in a market whose rents were sky high,” he says. “That facility has since dramatically increased in value. The facility was too large for [him] to purchase on his own, but he was able to with our help and partnership. It has been one of the best deals we’ve ever done!”

Other benefits include established connections and lessons learned. Members can harness this collective power to more confidently structure deals or avoid bad ones. “A participant often thinks small when they come in until they recognize the resources they have in the community,” says Meyers. “They realize they now have access to networks, access for capital and lending for their portfolio, and they can confidently go out there in the field because they have the resources to do so. We have people who share their mistakes and experiences, then they point out blind spots to others. We’ve kept people moving forward, and we save them from losing money. There’s no way to measure that other than some of the best deals you make are the ones you don’t end up investing in.”

In addition to gaining access to a variety of calculators, contracts, checklists and other useful tools, joining a mastermind group can help committed participants bring energy and focus to achieving their vision of success in the self-storage industry.

Katherine D’Agostino is the founder of Self-Storage Ninjas, a self-storage feasibility-consulting firm. A former marketing-communications executive turned sensei, Katherine has a background that includes 24 years of creating and implementing business plans for a wide range of companies. A self-storage owner herself, she focuses on delivering unbiased reports that enable investors to make informed decisions. To reach her, call 402.570.5021; email [email protected].