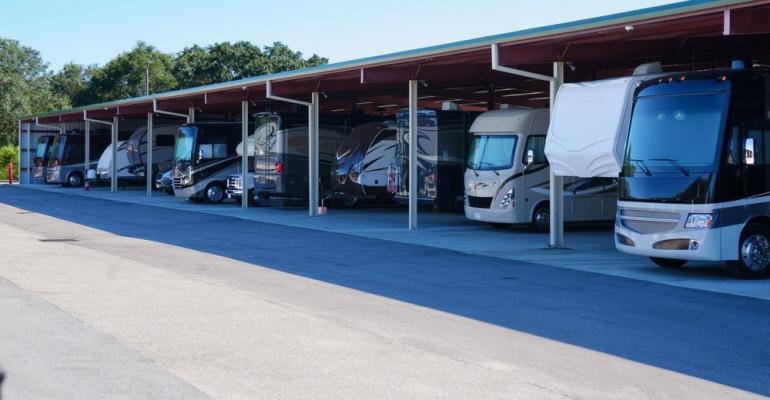 Although there’s high demand for the self-storage of boats, RVs and other vehicles, there’s a lack of supply in most states. Before building this type of project, however, you need to carefully consider your site’s feasibility.

Across America, boat and RV self-storage is in high demand and short supply. If you’re thinking about filling that need, here are some tips to help you determine site feasibility.

The (Not So Secret) Secret

Finding an area with sufficient demand is going to be much less of an issue than finding land where the county will let you build boat/RV storage. “Worry less about demand and more about where to build one,” says Jamie Lindau, national sales manager for Trachte Building Systems, a supplier of metal buildings to the storage industry. “The normal tendency for a traditional mini-storage facility is to have the highest population possible within a three-mile radius. But if you do that, the land cost is such that you can’t make the economic model work for boat and RV.

“That’s why these facilities are not built in the highest metro areas but a little bit outside—because of the land-cost scenario. You still want to be in the highest population possible, but you’re never going to be in a place with a 100,000 population within three miles because it would be too expensive.”

The primary factor to consider when evaluating a target area’s suitability for boat/RV storage is zoning. This is by far the most difficult factor to overcome and the first checkbox to tick on every parcel you consider. Because laws that regulate the parking of boats and RVs in driveways, yards and streets are gaining enforcement in even the smallest towns, strict covenants will make a parcel even more attractive.

Bob Hayworth, chairman and founder of Baja Carports, a design/build company specializing in carports, RV/boat storage and solar-support structures, suggests you start by looking for properties near gated communities that prohibit parking on the side of the house or in the front of the home. “Consider how far the nearest body of water with a boat ramp is. Where are the closest gas stations? Grocery stores? People want to gas up, stock up and go! Also, consider how far the nearest urban center is where parking is limited.”

So, which is better: a location close to a lake or a population center?

“Close to a lake because people leave the [vehicles] there,” Lindau says. “For example, in Wisconsin, the rates close to the lake are cheaper for the people coming from Chicago—less than half-price. You see a lot of boats that are stored in the area they are playing in.”

Lindau elaborates with a crucial factor to consider in your site’s feasibility study. “The hard thing is, for the demographics, you don’t use the amount of population that’s on the census; you use the population that’s the highest during the tourist season. For instance, you might have an area with a 5,000 year-round population that jumps to 40,000 during the summer, so that’s what you use in your feasibility study. This explains the weird, skewed numbers in resort areas, especially when you look at square footage rather than unit mix, because the unit size is so large. In this scenario, you might have 25 square feet per person rather than eight because it’s a tourist area.”

Hayworth suggests either parcel could work. “Building near a lake that’s popular among recreational vehicles and boaters, such as Lake Tahoe, Calif., or Lake George, N.Y., can be wise to rent to a target market attracted to the abundance of activities that doesn’t want to spend money on pricey hotels,” he says. “On the flip side, building near a population center attracts tenants needing extra space to store their leisure toys.”

For a definitive count of boats and RV owners in your target area, companies like DatabaseUSA.com will run a search for the number of each group of vehicle owners in their system. This info is available for purchase as an e-mail or mailing list. They can even give you the size of the boat owned! After you open your site, you might consider an e-mail or direct-mail marketing campaign to your target audience using this list.

Your customers will drive farther for a fully enclosed or canopy facility than they will for a traditional self-storage unit (generally a maximum of 10 miles). Exactly how far is under debate.

“It’s really about how close in proximity an accessible main highway is to both the facility and the residents. People will drive 50-plus miles, but no more than an hour, to park their recreational vehicles under well-kept canopies with 24-hour code accessibility and security,” Hayworth says.

Lindau limits the range to 20 miles. “They would rather be closer, but they won’t go more than 20 miles. They want to drive one mile, but 20 miles is the farthest I’ve seen.”

What if there’s no boat/RV-storage competition in your target area, particularly for canopy or fully enclosed? How do you set your rental rates for your market? By looking at other facilities in similar locations, Hayworth advises. “Will your facility offer services such as an RV wash bay, propane refill, electrical hook-ups, dump stations, security or an onsite manager that can be included in the rate? Being a member of a self-storage association can help with what’s a fair and accurate rate to charge customers without overpricing them,” he says.

When reviewing other facilities’ rental rates, take guidance from large, regular self-storage units. “Use competitors’ 10-by-30 price as a baseline number,” Lindau says. “Yours will be the same square footage price even though it’s a bigger, taller unit. That’s where I would start, and then once you fill, you can raise rates or build more units. That’s what I did. I took that rate, maybe even higher. You don’t go lower.”

When building enclosed vehicle storage, Lindau suggests constructing 70 percent to 80 percent of the unit mix for class-B and -C motorhomes and pull-behind campers, boats and commercial clients. “These would be 12-by-30 units to 12-by-40 units, with 14-foot-high doors, which can handle those,” he says. “I would build 20 percent enclosed units for biggest class-A RVs. That way I can see how they do, and then I would build the rest after I know what has the most demand. What I don’t like to see is a unit mix with all of them in the largest size because you make so much less money per square foot.”

Building canopies requires a different approach. Owners shouldn’t be biased toward the size of the RV or boat, Hayworth advises. “Why turn away customers needing your storage facility? Be accommodating to all.”

Lindau describes a further scenario to consider: “A lot of people will take the outside parking, and you get more of the unusual, higher-end stuff going inside. Not always RVs. A business might use it. I have a party-bus service using two units; there are a lot of possibilities.”

When providing enclosed boat/RV storage, you’re also offering commercial storage. “I see many customers looking for very large units across the country due to the number of facilities built with too many small units because there are too many accountants out there. You can look at the discounting and see what’s happening,” Lindau says.

Climate is also playing more of a role in a facility’s unit mix over the customer demographic make-up. “More people are OK with just a canopy if they just have rain and sun,” Lindau says. “Three hundred miles north of the Mason-Dixon Line, I see very few canopies because you’re missing all the people wanting full commercial-sized units or who want to protect their boat and RV from snow. The three-sided canopies aren’t often built because you don’t get much more rent for them than you do a regular canopy.”

“Climate really doesn’t play into our inquiries. We work nationwide,” Hayworth says of Baja’s experience. “People really just want a place that’s secure and accessible to them. They don’t seem to care if it’s enclosed. If anything, they’re more worried about the sun than snow.”

Both experts agree building in phases is a great idea. “If you can, build in phases because you will verify that you’re right with the unit mix you’re doing and not risk so much. Because a lot of people who are jumping into boat and RV might not be rich, they’re going to build in phases. First, because they are conservative; second, because they’re worried about the unit mix,” Lindau explains.

Hayworth agrees. “If you have an existing, enclosed storage facility and have room for a row or two of covered RVs, build what you can afford. Always build what you can afford! Keep in mind, staging an RV and boat facility for construction while it’s occupied can be very tricky. It’s always best to do install at once. If you can’t and you can protect the parked recreational vehicles and have an access path for equipment, then staging may work for you. One thing you don’t want to do is put out the existing paying tenants or make them move their RVs.”

As with any feasibility study, make sure the numbers make sense for your long-term goals and the projections hit your desired return on investment. Remember, you’ll need twice as much land for a boat/RV-storage facility to make the money you would in traditional self-storage. Take a close look at the standard research mandatory for every feasibility study and finish strong with a full seven years of annual projections, three years of net operating income by month, and a sensitivity analysis to ensure your project has the strongest chance of success.

How to Effectively Operate the Boat/RV-Storage Side of Your Self-Storage Business
May 10, 2022

Building Boat/RV Storage as Part of a New or Existing Self-Storage Project
Mar 04, 2022

How Vehicle Storage Might Help Your Desired Self-Storage Investment ‘Pencil Out,’ Even in a Crowded Market
Nov 24, 2021