Concern or Eye Roll? What the Thumbs-Up Emoji Flack May Mean for Self-Storage Social Media Marketing 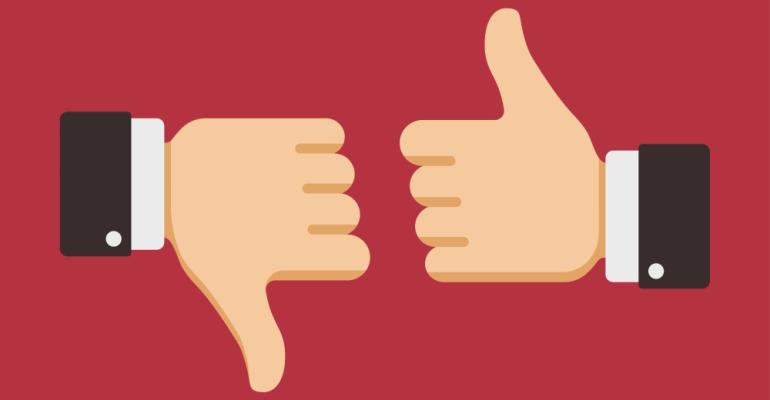 A sizable number of Gen-Zers apparently view the thumbs-up emoji with some disdain. While this is perplexing for many of us who grew up with the symbol as a clear sign of positivity, this revelation could have ramifications for business use and social media. Here are some thoughts on how the emoji flack may affect self-storage marketers.

The thumbs-up emoji has apparently been declared “hostile” by Gen Z, and if I’m being honest, I’m not entirely sure how to respond emotionally or in symbol form. For most of my lifetime and those in the same age bracket (Gen X), a thumbs-up sign has been a universal sign of approval, and usually an enthusiastic one. So, at first glance, it’s a bit mystifying why a younger generation would flip it on its head and see it as sarcastic or passive aggressive. I mean, what in the names of Arthur Fonzarelli and Siskel & Ebert is going on here?

If you haven’t seen the headlines, this story has been covered by Today, Fox News, the New York Post, Forbes and other major news outlets, not to mention made the rounds on YouTube, Twitter, TikTok and other avenues of social media. It all seems to stem from a Reddit post, in which a 24-year-old questioned whether they were “adult enough to be comfortable with the ‘thumbs up’ emoji reaction,” particularly in the workplace. Though the original post has since been deleted, it elicited 133 comments in support of and against the premise.

That tidbit has since been paired with supposed research from Perspectus Global, which purported to survey 2,000 16- to 29-year-olds whose responses were used to compile a top-10 list of emojis that make the users look old. The one that topped the list was—you guessed it—the thumbs-up symbol.

Though there is some question to the validity of the survey, people’s honest reactions to this story are interesting. So is the historical use of emoticons, which morphed into the abundance of emojis most of us are familiar with today. I’m among those who started in publishing before we knew what an emoticon was and then was reluctant to use the symbolism to clarify contextual emotion of the written word with a :-), ;-), :-(, :-| or other collection of keystrokes.

Over time, I’ve come to use emojis for emphasis or clarity, certainly in informal texts with friends and family, but also occasionally in communication with colleagues and business teammates. In larger context, there’s no denying that emojis have become central to user reactions on social media and used extensively in messaging on platforms by business marketers. From that standpoint, the scuttlebutt around how symbols are perceived by employees and target audiences is one that should be taken seriously.

While my initial reaction to this story was dismissive, it also reminded me of the time my then-teenage, Gen-Z daughter informed me that responding via text with an all-caps “OK” was considered rude or aggressive. As a journalist, I can’t bring myself to write “okay,” but I’ve since altered my typing to either “Ok” or “ok” if it seems like an appropriate and acceptable response. Interestingly, the thumbs-up emoji has been compared to a dismissive “K” by some who view it negatively (By the way, the OK hand emoji is also on the endangered list).

The truth is language and marketing messages change, usually to evolve with the times or to reflect what’s hip in the moment. What was acceptable in a 1950s advertisement for a blender is understandably cringeworthy today. Millennials and Gen-Zers have only ever known a digital language that includes emojis, and they’ve adopted their own written styles of communication with each other in the same ways that Baby Boomers and Gen-Xers relied on spoken slang.

The whole point of business communication and marketing is to be effective, not out of touch, so it makes sense to give some credence to this emoji flack and pay attention to what young employees and potential self-storage customers have to say. The more economic influence and buying power Gen Z amasses, the more in tune self-storage businesses and marketers need to be. After all, Gen Z is largely responsible for any of us old fogies in business and marketing knowing what TikTok is, much less trying to leverage it for gain.

In that context, it also shouldn’t be lost on anyone that it was Gen Z who sought their own platform away from Twitter and Facebook, the latter of which uses a thumbs-up symbol as its base user reaction as well as its primary business logo. I have no doubt that even Tom from Myspace finds that metaphorical irony amusing.

The truth is informal methods of communication have impact in the workplace and in marketing. In a business context, there’s potential risk and liability in knowingly using language or symbols that others may find offensive or alienating. If that sounds like a reach, it’s at the very least counterproductive.

In social media marketing, emojis are used as a quick and efficient way to convey messaging or engage directly with audience members. To be effective, it’s important for those messages and engagements to land correctly with their intended audience. There’s a reason why major brands employ 20-somethings to craft and participate in those interactions, particularly on platforms that draw likeminded, younger consumers.

I suspect that most self-storage operators who actively use social media and engage with users in comments or via text message probably don’t have a full-time person in their 20s doing the work. This often falls on facility managers, many of whom have been doing their jobs for a decade or longer.

While the use of emojis may seem innocuous, these little symbols have become part of our everyday communication and language, which means that in a professional context—particularly where marketing is concerned—it makes sense to think about them in the same way you would with word choice. For marketing messages to hit their target, they need to be absorbed with the desired intent.

If shifting away from using a thumbs-up icon or another symbol frowned upon by your target audience helps land rentals because those new customers view your messaging as current and begin to identify with your brand, then it’s probably worth considering how you use emojis in your messaging going forward. Put another way: Those odds are better than losing a sale because you’ve phased out using the thumbs-up emoji and others deemed past their usefulness. Chances are no one will even notice.

If you’re curious about the rest of that top-10 list of emojis that make users look old, here’s the full list. Give yourself one point for each one you use with regularity.