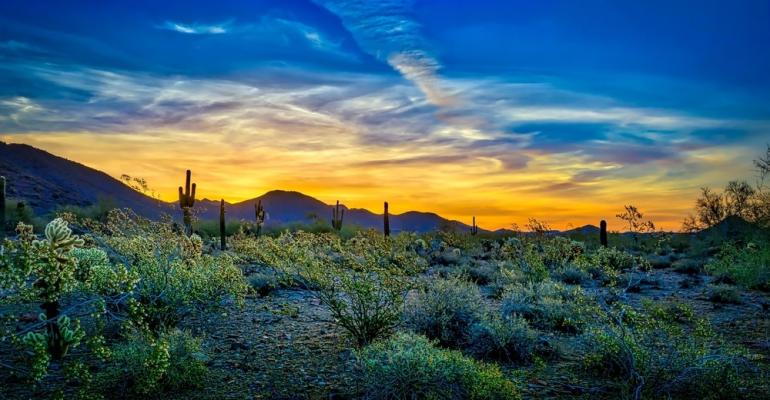 The Sun Belt is typically strong for self-storage performance, but the two largest cities in Arizona continually defy already high industry expectations. Read why owners and investors remain bullish on Phoenix and Tucson as hot markets—in more ways than one!

When it comes to self-storage, one area of the Sun Belt keeps getting brighter. Arizona’s two largest cities, Phoenix and Tucson, keep defying already high expectations, with rental rates increasing at a fast clip despite a sharp spike in new industry supply.

The main reasons for this almost unprecedented growth are a strong economy, a booming population and a red-hot housing market. It also doesn’t hurt that many nearby Californians, fed up with high housing prices and taxes, are flocking to Arizona by the thousands each year.

“We’re busier than ever,” says April Worden, owner and CEO of Brown Worden Properties, which owns self-storage facilities in the Tucson area. “The demand keeps growing. We opened up our 19th facility last year, and it’s already 70 percent occupied.”

The numbers pretty much tell the story. According to U.S. Census data, Arizona was the third-fastest-growing state in America in 2020, with population jumping 1.78% to 7.4 million people. By comparison, the nation as a whole grew only .5% last year. So far this century, Arizona’s population has grown a staggering 45%, with most people flowing into the Greater Phoenix area, which includes Scottsdale, Mesa and Tempe, home of Arizona State University.

Not surprisingly, the boom has resulted in increased demand for short- and long-term self-storage. In fact, the Phoenix area has seen an 18.3% increase in supply in the last three years to 33 million square feet, according to Radius+, a company that specializes in self-storage data, analytics and location intelligence. Meanwhile, the penetration rate (square feet of self-storage space per capita) is about 6.7, outpacing the national average of 5.9.

In most markets, such an influx of new supply would lead to a deflation of rental prices—if only briefly—but that hasn’t been the case in Phoenix. Instead, lease rates have grown consistently in recent years, hitting about $1.82 per square foot for climate-controlled units operated by the real estate investment trusts and $1.70 for all units, as of early April, according to Radius+ data.

“This is a very healthy market,” says Cory Sylvester, a principal at Radius+, noting that he doesn’t see any major negatives. “It has a great long-term growth outlook.”

With a population of about 1 million, the Tucson self-storage market—about 125 miles south of Phoenix—isn’t as hot, but it’s very solid by most other standards. In recent years, supply has grown about 9% to 6.5 million square feet, Radius+ data shows. Meanwhile, its penetration rate is about 6.1, just above the national average.

Further, Tucson rental rates are strong, hovering around $2.06 per square foot for climate-controlled units. Though many of the city’s units aren’t climate-controlled, its rental rates have stayed at relatively high levels, notes Sylvester. “Tucson is definitely a growth market, but just not to the same extent as Phoenix,” he says.

The success of the Phoenix and Tucson self-storage markets ultimately comes down to the state’s strong economy and booming population, which have fueled huge demand for new housing. In fact, there are waiting lists, as home developers can’t build fast enough. This has led to a surge in storage demand by those looking to temporarily store items until they find a new residence as well as long-term solutions for residents who don’t need as much stuff in their newer, multi-family dwellings. In addition, the pandemic and an increase in remote working have created greater need for space.

“With the high housing demand comes the need for more storage solutions,” says Whitney Jurjevich, owner of Ameripark Covered Storage and a board member with the Arizona Self-Storage Association. “The thought of overbuilding is directly correlated with what is happening in residential. The market is trying to keep up with the demand, and much is through multi-family development, meaning those residents need [storage].”

Space is required for more than just household and business items, too. Jurjevich, whose firm specializes in boat/RV-storage solutions, says his business has seen strong demand from outdoor-minded Arizonans. The desire to get outdoors for recreation during the pandemic has only helped fuel rentals, he says.

Though self-storage fundamentals are strong in Phoenix and Tucson, local experts do advise caution due to rising labor and construction prices for homes, self-storage facilities and commercial structures. “Materials are getting really expensive,” notes Worden, while Jurjevich stresses that the “frothy” nature of situation is elevating prices “for everything.”

Industry competition, particularly in the Phoenix area, is also heating up, though most insiders remain bullish on Phoenix and Tucson as well as the state as a whole. “Arizona draws in so many people with its diverse opportunities that cover a wide variety of interests, including recreational/outdoor activities, vibrant career opportunities, a low cost of living, and an overall high quality of life for many income ranges,” says Jurjevich. “Because of these reasons, it has created many needs to be filled by self-storage.”