Since opening in 2011, Giba Storage has grown aggressively to keep pace with the demand for self-storage in Westmead, South Africa. Now the operator is meeting yet another need—clean energy—with the addition of solar panels.

Since opening in 2011, Giba Storage has grown aggressively to keep pace with the demand for self-storage in Westmead, South Africa. Nestled inside the Giba Business Park, the facility has expanded from 56 units to 220, and still has ample space for future development. In addition to storage, the operator is meeting yet another need in the region: clean energy.

Last year, Giba Storage added solar photovoltaic (PV) panels to the rooftops of several of its buildings. The 150 kilowatt peak system feeds into the property’s electricity grid and supplies power to the business park, which strives to provide an eco-friendly environment for light-industrial and commercial tenants. The goal is to add panels to every roof as demand for electricity increases.

“We currently have just over 30 tenants in Giba Business Park, all of whom are using electricity in various quantities,” says Giba Storage CEO Chris Harburn. “They all make use of our own prepaid meters, so we actually have a captive market to sell our ‘green’ electricity.” 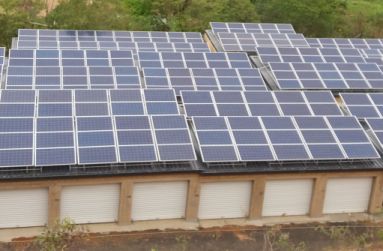 The park’s location has been the driving force behind its design as a sustainable environment with low-impact eco-practices. It’s built on a large plot of land that’s also home to the Stockville Quarry, a decomposed granite quarry, which is being rehabilitated. Waste from the quarry was even used in the construction of the storage facility.

“Our whole environmental management plan for the quarry was to rehabilitate the quarried areas into level platforms for future industrial use,” Harburn says. “We’re about 70 percent through this process and have about three to four years left of life in the quarry depending on demand.”

Unfortunately, lenders didn’t immediately see the potential and benefits of the solar project. Giba Storage began raising funds to install the panels just a year after opening, but struggled to find backers. “After fighting for three years, we eventually found someone who would fund the first-phase installation—at a huge expense,” Harburn says. “For us, it was more important that we got started. Once we had a system up and running, we felt we could then go to the banks with a working model.”

The system was installed in September 2016, with the first “green electricity” fed to the park’s grid just a month later. The system consists of 567 panels and six inverters. To date, it has produced 158.72 megawatt hours, which is the equivalent of planting 207 trees and saving 62,023 kilograms in carbon-dioxide emissions.

“We’ve borrowed just over R2.5 million at expensive rates, but once we’ve run the system for at least a year, we feel we could raise additional finance at a much better rate and extend the system to cover the rest of the roof space,” Harburn says. “Our long-term plan is to then cover the roof space on some of our existing factory buildings. All future factories we develop will be designed with the solar PV in mind.”

While there’s still work to be done, the overall goal is to offer an eco-driven sustainable business park where people from all walks of life can work and play together. For more information, visit www.gibastorage.co.za.

Catch Some Rays: Making the Most of Your Self-Storage Rooftop With Solar Panels
Sep 23, 2021
Trussville, AL, Self-Storage Facility Celebrates the Addition of Solar Power
Sep 22, 2021