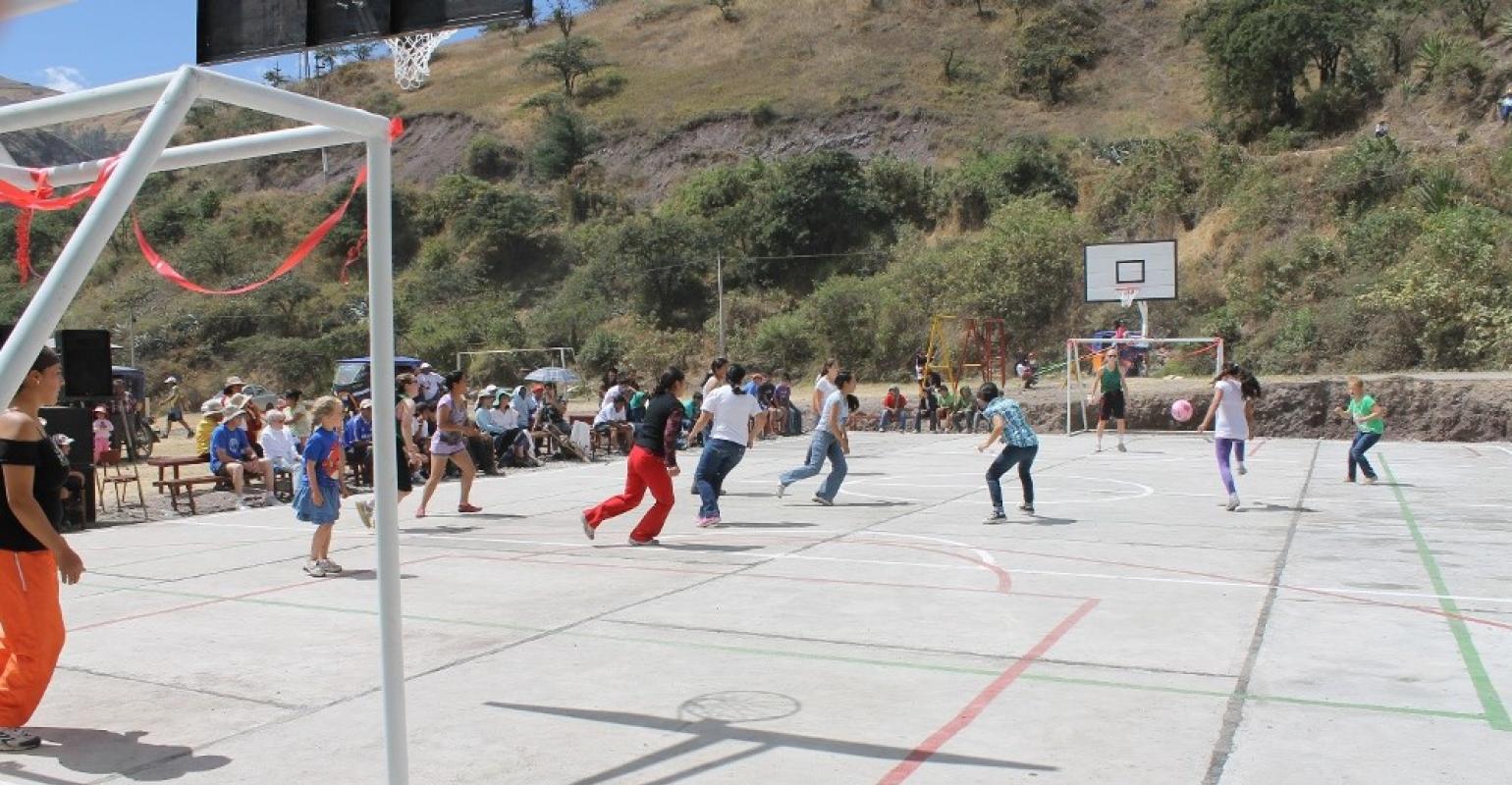 A Charitable Slam Dunk: West Coast Self-Storage Teams Up With Courts for Kids

At a glance, you might not think self-storage and basketball have much in common; but at West Coast Self-Storage, they’re inextricably linked thanks to the company’s relationship with Courts for Kids. The nonprofit creates positive community impact by installing play areas around the world.

At a glance, you might not think self-storage and basketball have much in common, but at West Coast Self-Storage, they’re inextricably linked. Since 2012, the company has supported Courts for Kids, a nonprofit that builds play areas in disadvantaged regions of the world. The storage operator provides the charity with free use of a 10-by-20 storage unit at its Padden Parkway location in Vancouver, Wash.

In some ways, storage facilities are emblematic of the prosperity we enjoy in the U.S. But in many third-world countries, the extravagance we take for granted is beyond people’s wildest imaginations. In fact, just having a safe space for kids to play is a luxury.

Courts for Kids is tackling this very need. I spoke with president Derek Nesland to gain insight to this incredible organization, its origins and the impact on communities.

Nesland was a basketball player for Portland State University. After his college days, he had the opportunity to play internationally. Throughout his travels, he noticed a common denominator in many of the places he visited—the lack of basketball courts. Kids didn’t have any type of hard surface on which to play. While children in these countries sometimes played soccer in open fields, in the rainy season, the fields would typically flood.

This reality stuck with Nesland, so when a Philippines village reached out to him in 2006, he offered to help create a basketball court for the community. He was working with student athletes at the time and thought this would be a great way to expand their worldview.

In April of that year, Nesland and his wife, Selene, took 25 students and adults to the Philippines. Through trials and tribulations, they were successful in helping the villagers build a basketball court. In the process, they created lasting memories for the students and a substantial, permanent centerpiece that could be used by the whole community.

At first, the Neslands thought the project would be a “one and done” effort. But not long after, they received e-mails from communities in Costa Rica, Honduras and Indonesia. It was then they realized they could fill a need being addressed by no other organization.

Fast forward 10-plus years and the organization has built 162 courts in 28 countries with the help of more than 3,300 volunteers and community participants. One of the main reasons Courts for Kids has been successful is the way it empowers a community, Nesland says.

“Partnerships are really important to us,” he says. “It’s important that the communities where we build courts are highly invested. They’re fundraising; they’re volunteering labor; they’re preparing the land. This is their project that we’re assisting them with.”

Each project requires a lot of work. Courts for Kids hires a contractor who oversees the procurement of materials and manages the labor. Though some skilled workers are hired, most of the effort comes from local volunteers and student groups. The community must provide at least 12 volunteers. The rest of the participants come from high school and college groups in Oregon and Washington, as well as other schools across the country. Projects are also open to families who want to participate.

The projects take months of planning and preparation. The land where a court is to be built must be leveled and fortified. This can take anywhere from a week to a few months, depending on the condition of the land, and it must take place ahead of the organization’s arrival. The volunteers then load sand, rocks, cement and water into a concrete mixer, which gets mixed, poured and leveled. This typically takes up to four days. Almost all the materials are sourced locally. The only items Courts for Kids brings are fiberglass mesh to reinforce the concrete, basketball hoops and balls (basketballs, soccer balls and volleyballs). 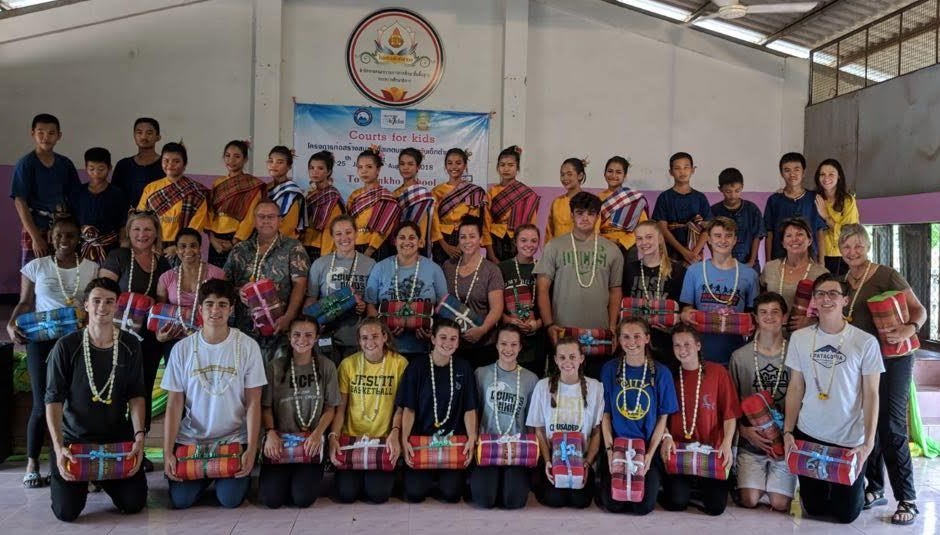 The students help fundraise stateside, then travel to the project location where they typically stay at schools or with local families. By having kids stay in the community rather than a hotel, they get a full immersion and cultural exchange they might not otherwise obtain. It’s transformative for students to do something that really gives back and serves others, Nesland says, adding that in the end, they’re enriched by the experience.

Recently, a group of athletes from the University of Oregon (UO) made its seventh Courts for Kids trip, this time to Northern Uganda—a region devastated by a decades-long civil war—at the request of Ugandan professional basketball player Ochan Moses. Building a basketball court in this area meant the community was healing and peace had returned. UO quarterback Justin Herbert was one of the participants. 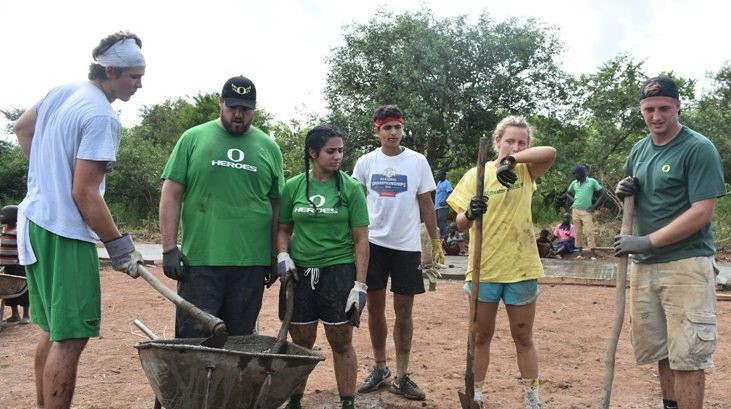 Courts for Kids is now tackling 30 to 35 projects per year in countries all over the world including Africa, Asia, and Central and South America. Unfortunately, there are countries the organization can’t visit due to political instability. For example, the group was building six projects per year in Nicaragua but had to eliminate trips due to violence.

“Because we’re bringing students, safety is our No. 1 priority. We’re hoping that gets resolved so we can go back and continue our work there,” says Nesland, adding that the organization monitors U.S. State Department warnings surrounding travel to certain countries. 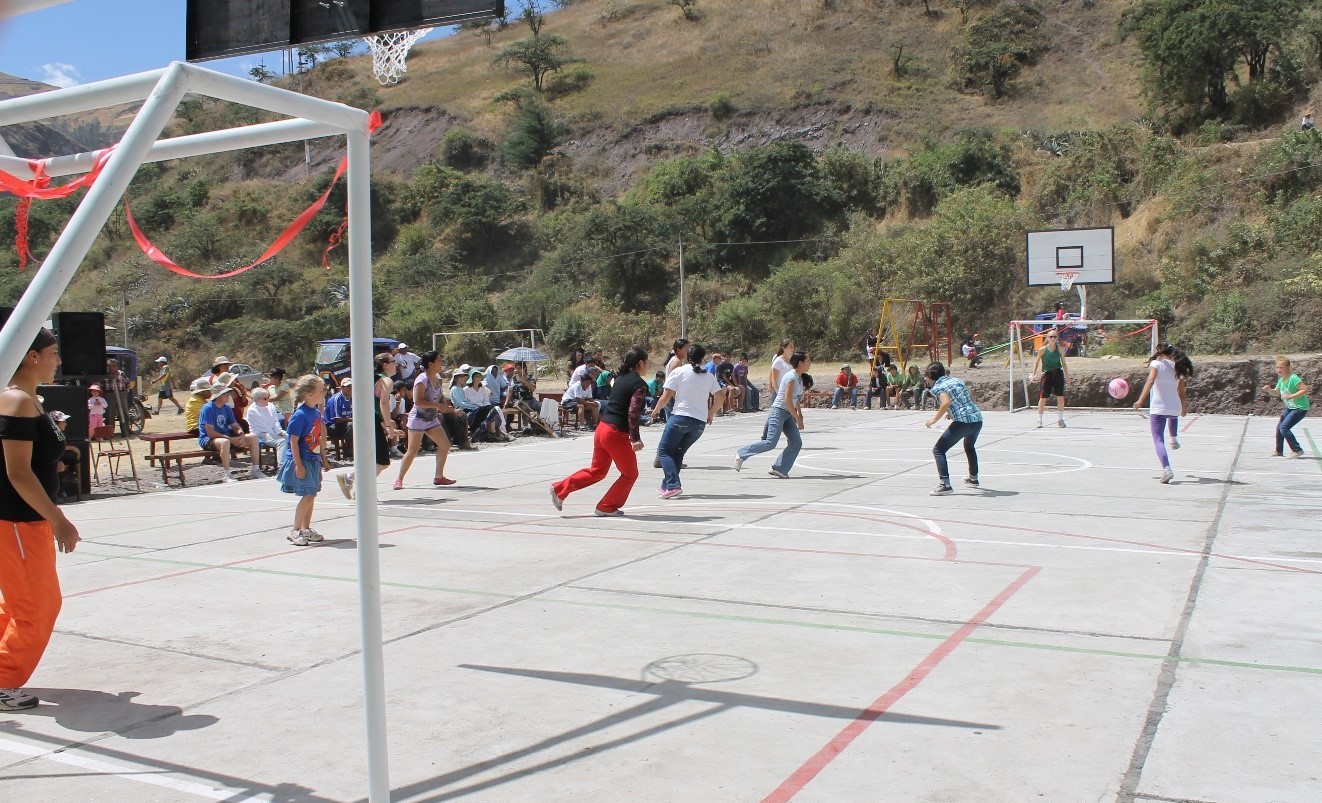 “Selene said the storage facility they had been storing their materials at for free decided to charge them full price,” Pinkstaff says. “She said their organization was on a shoestring budget and asked whether we could offer a steeply discounted or gratis unit. I was like, ‘Bring your stuff. Let’s go.’”

When Selene came to take possession of the unit, it happened to be during the facility’s grand-opening event. While there, she met the partners of the site’s ownership group, Catalyst Storage Investors LLC, including Chuck Barbo, Harrell Beck and Dave Grant. The partners were impressed with Courts for Kids and in favor of donating the space.

Nesland is proud of the lasting impact the courts can have on the areas in which they’re built. Afterward, community members often feel motivated and empowered to raise money for additional projects, such as installing seating or fencing around the court, or mounting lights so it can be used at night.

“The goal at the end of the day is that the community feels like this is their responsibility to take care of their own court,” says Nesland. “That’s really important for our philosophy and why we do this. We want it to be sustainable.”

Because the courts are often the only paved surface in a community, they end up being a center of activity, bringing people together for all sorts of events, from celebrations and festivals to meetings. “It’s a big cause for celebration in these communities,” notes Nesland.

A recent trip to Thailand’s poorest region stands out. Prior to the organization’s arrival, there was a lone Peace Corps volunteer stationed there, the only American in the community. When the Courts for Kids team arrived, the locals were exposed to 25 more. The experience became an incredible event, with a great cultural exchange on both sides.

“There was a huge blessing ceremony. The entire community basically blessed the whole team and the court at the end of the trip,” recalls Nesland. “It was a very powerful moment, bringing those two communities together and experiencing their culture. It was a beautiful thing.”

Another positive impact the courts have had is on the role of girls in the community. Often, girls aren’t allowed to play soccer or baseball, Nesland says. Having a court allows them to play basketball, volleyball or handball.

Finally, bringing basketball courts to these communities promotes capacity building and gives local leaders the chance to gain experience in budgeting and planning projects of this scale. The Neslands hope to continue providing opportunities for students and communities to expand their worldview and foster cross-cultural understanding.

For more information on how you can help and even volunteer, visit www.courtsforkids.org.

Derek Hines is a writer for West Coast Self-Storage, a self-storage management, acquisitions and development company that operates 55 facilities in California, Oregon and Washington. He writes extensively on all subjects related to self-storage. For more information, visit www.westcoastselfstorage.com.