Impediments and Solutions to Self-Storage Approval: A Tale of Two Projects

Self-storage projects began cropping up along rural and suburban roadsides in the late 1970s and early 1980s. These were typically the single-story variety, spread out over large tracts of land with appropriate zoning. Rarely were owners bothered by conflicts with neighbors or regulators. Times have changed.

The two greatest impediments facing self-storage developers are finding a suitable site and securing approval from local government entities. Though every project and site is unique, these challenges are common to all ventures.

When I began in the industry, development sites were widely available, and relatively few groups were concerned about the appearance of the structures. Today, there are few easy-to-develop sites, and those that do exist may be in areas with major restrictive covenants.

In this development climate, before you proceed with construction documentation, you need to assemble a project-approval team. This should comprise a capable civil engineer, an architect with self-storage design experience, and an attorney with comprehensive knowledge of the local real estate laws and covenants.

I recently designed two large multi-story self-storage projects, one in a suburban center and the other in a major city. I present them here as examples of the approval process. Both were difficult to actualize because of requirements and restrictions by the local governments. I had to jump through many hoops, frequently redesigning and seeking solutions, while every change created a ripple effect throughout the entire project. Following are brief summaries of the problems we faced and how we obtained final approval.

The Commerce Center Self Storage

This facility in Largo, Md., a suburb of Washington, D.C., sits on the only 2 acres of virgin land in a large development area called the Largo Town Center. Before beginning the design phase, I consulted with the owner’s attorney and civil engineer. The lawyer checked to see if self-storage was allowed in the district and what community-approval meetings would be necessary, while the engineer checked to see if sufficient utilities such as water and electricity were available to support the building. 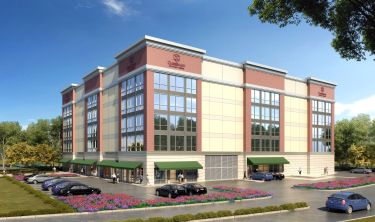 I researched any community standards that needed to be addressed. The Largo Town Center Development District Standards, which were available online, stated, “The development district standards contain regulations that impact the design and character of the Largo Town Center. The purpose of these standards is to shape high-quality public spaces with buildings and other physical features to create a strong sense of place for the Largo Town Center area consistent with the land use and urban design recommendations of the preliminary sector plan.”

From this, I learned the building-height limit (six stories), the allowed windows-to-wall ratio, the requirements for exterior surfaces, and awning and sign dimensions. I created a matrix that answered all these requirements and built an initial design. Then I could project the cost. Originally, I wanted to use split-face block for the first floor, but that was rejected by the community, so I substituted a white tile. I’ve found it’s a lot easier to work within a community’s design requirements than to fight them if the requests are reasonable.

The standards required that site-plan submittals include architectural elevations in full color, street and streetscape sections, build-to lines, and a parking schedule and plan. In presentations to community leaders, who tend to have difficulty reading architectural plans, I created clear graphs and three-dimensional visualizations that are much more effective than two-dimensional elevations. The process necessitated a series of follow-up meetings, but with good communication skills and a calm demeanor, I was able to achieve my goals.

It was the lawyer’s role to tie everything together and secure approval for the design. I then created the construction documents, met all the local and national codes, and satisfied the plan reviewers and the fire marshal.

This project, which is now under construction, took more than a year from the first step to ground-breaking. Once complete, it’ll comprise 140,000 square feet of storage and 5,000 square feet of commercial space. It’ll be managed by CubeSmart and branded under its name.

This project at 72 Florida Ave. in Washington, D.C, is a great a case study in difficult projects. In the center of the city, the parcel lies between two existing buildings, accessed from two streets on either side. The site was problematic. It’s long, with a “dog leg” at one end and a grade change on another section by an elevation of 20 feet. Trying to satisfy the requirements of the client and authorities was challenging and frustrating, at best.

According to city codes, we needed a specific ratio of parking and loading zones to buildable square footage. The lawyer calculated the formula. The 166,000 square feet of leasable storage space required by the owner to make the project viable required three truck-loading zones and 27 parking spaces. I made several design proposals, which the lawyer critiqued. 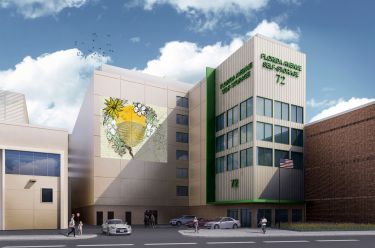 At first, I decided to build seven stories. I divided the required parking between the front, near the office, and the rear, near the main loading area. But because I needed to preserve a 25-foot setback from two of the property lines that couldn’t contain parking, I was unable to make that scheme work.

I countered by putting 10 parking spaces inside the rear of the building and moving the stairs, but I still didn’t have enough to meet the square-footage requirement. The lawyer then used another allowable method that reduced the gross square footage by calculating how much of the building was less than 4 feet above grade. Satisfied with this solution, we ran a cost estimate. When the numbers came in, the cost was prohibitive, due primarily to the fact that 30 percent of the first two floors were totally buried in the site.

As a solution, I shortened the first two floors so they wouldn’t have to be excavated. This scheme worked from a cost standpoint, but I lost 20,000 square feet of storage capacity. To regain the lost space, I added another floor. The lawyer said I could add a floor, but it had to have a 1:1 setback on certain elevations by city zoning code. In addition, my roof stairs and elevator shafts had to meet similar setback requirements in relationship to the new setback roof. Because in this iteration, none of the building was below grade, I couldn’t take advantage of the parking exclusions for gross square feet less than 4 feet above grade.

Again, I didn’t have enough room for the number of parking spaces required. I redesigned my stair and elevator locations, which gave me two more spaces inside the building. I was still short, but the civil engineer came to my aid by using compact-car spaces.

By building up, I had once again accommodated the 166,000 square feet my client requested. However, the lawyer reminded me we still needed three truck-loading spaces. Thankfully, the civil engineer found just enough space for a third loading space. The pieces of the puzzle finally fell into place, and we had an acceptable site plan and project.

No one person can answer all the questions or solve all the problems that may arise during the self-storage zoning and design approval process. The best formula for success is to harness the combined efforts of a competent and committed professional team.