Phoenix-based OpenTech Alliance Inc., developer of the INSOMNIAC line of self-storage kiosks, released a whitepaper this week summarizing self-storage kiosk use in 2011. The data shows how self-storage consumers are using and benefitting from self-service options.

Phoenix-based OpenTech Alliance Inc., developer of the INSOMNIAC line of self-storage kiosks, released a whitepaper this week summarizing self-storage kiosk use in 2011. The data shows how self-storage consumers are using and benefitting from self-service options.

OpenTechs kiosks collected more than $70 million in rental fees in 2011 and rented an average of 4.3 units per facility per month, a 26.4 percent increase over the 2010 average. The company attributes the increase to its Live! Megan call-center service, which assists self-storage customers in completing transactions. The service is offered as part of the company's monthly maintenance and warranty program.

OpenTech's stated goal is to achieve six new rentals per kiosk per month, according to president and CEO Robert A. Chiti. At the Inside Self-Storage World Expo in Las Vegas, March 14-16, the company will be demonstrating new product enhancements that will help it reach and possibly this goal, including a two-way video conferencing service. The company will be exhibiting in booth No. 525. 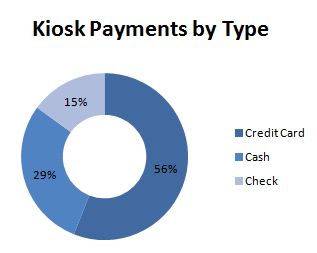 More than half (51.9 percent) of new self-storage rentals made at OpenTech kiosks in 2011 were made during regular office hours; 63.5 percent occurred on weekdays. The majority of payments (51.4 percent) were collected outside of regular office hours, though the bulk of payments, 72.8 percent, were collected on weekdays as opposed to weekends. In addition, INSOMNIAC kiosks rented 567 units during the 11 major holidays in 2010, collecting $567,311 in rental fees on those days.

The statistics show that while credit cards were still the preferred method of payment, checks and cash still made up almost half of the total payments. Cash weighed in at 29 percent, checks at 15 percent and credit cards at 56 percent.

The complete 2011 Kiosk Usage White Paper is available for download at www.insideselfstorage.com/Whitepapers.aspx.

OpenTech products and services include seven models of INSOMNIAC self-storage kiosks ranging in price from $5,500 to $18,000, the INSOMNIAC Live!  call center, and the INSOMNIAC Self Storage Network for online storage reservations and rentals.