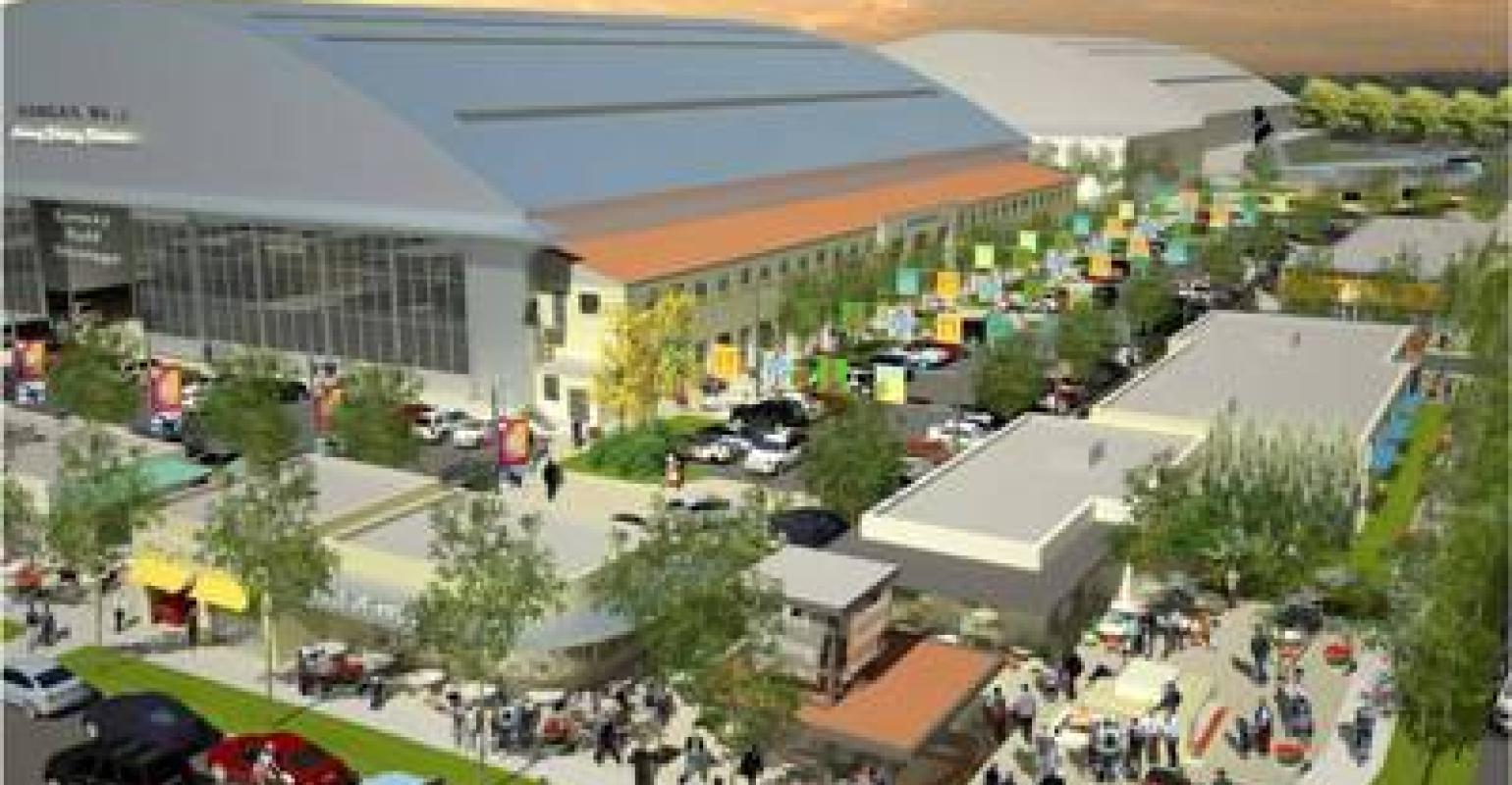 This is not just another self-storage conversion story. Were all accustomed to seeing vacant grocery stores, big-box stores, downtown office buildings and even a Hawaiian cave converted successfully to accommodate self-storage; but a historic airplane hangar in Denver now offers a unique new home for storage, shopping and public amenities with a twist.

This is not just another conversion story. Were all accustomed to seeing vacant grocery stores, big-box stores, downtown office buildings and even a Hawaiian cave converted successfully to accommodate self-storage; but a historic airplane hangar in Denver now offers a unique new home for storage, shopping and public amenities with a twist. Hangar 2 is part of the redeveloped Lowry Air Force Base, which comprised two massive hangars. Established in 1938, the base was built to house an Air Force Technical Training School. Its original mission was aerial-photography training, but Lowry was also heavily involved with the training of U.S. bomber crews and flight engineers during World War II.

In addition, the base was home to the U.S. Air Force Academy from 1954 to 1958, until its permanent site in Colorado Springs was completed. President Eisenhower even spent some time at Lowry, as his wifes family was from the Denver area. He essentially used it as a summer home from 1953 through 1955.

Due to the proximity of the residential area and the increase in high-performance jet-aircraft accidents at the base, flight operations ceased in 1966, though administrative offices and training remained active. In October 1994, cost-reduction measures taken by the military caused the closure of all offices and training facilities.

Hangar 1 was redeveloped as the Wings Over the Rockies Air & Space Museum. Hangar 2 remained vacant until its rebirth in 2011, thanks to the innovative development team of Hartman Ely Investments (HEI) and Larimer Associates, jointly known as Hangar 2 Partners (H2P).

HEI specializes in the design and adaptive use of historic buildings, renewable energy and energy efficiency. Larimer is a Denver-based real estate investment and management firm, best known for the Larimer Square project in downtown Denver. The company has also created several energetic neighborhood-redevelopment projects and restaurant properties. Together, HEI and Larimer brought complementary synergies to the table and a driving desire to infuse the Hangar with services that would unite the community while preserving its historic value.

Hangar 2 is a very unusual setting for a self-storage conversion. H2P chose it for four distinct reasons:

Self-storage consulting veteran Jim Chiswell, president of Chiswell & Associates LLC, was contacted to work on the project. When first asked about his interest in doing a feasibility study for such an unusual facility, Chiswell wasnt sure the offer was real. But after a few phone calls with Hangar 2 principals Joe Vostrejs and Jim Hartman, he was on a plane to Denver. I quickly discovered the Hangar 2 team had an inspired mixed-use vision of the propertys repurposing that was truly unique for a self-storage conversion, Chiswell said. Despite the surrounding competition, it was quickly evident the facility would be serving primarily the Lowry community. All my research pointed to a market opportunity with extremely high barriers to any further entry.

With almost 100,000 square feet of column-free space with a solid interior aircraft slab on which to build, H2P was interested in finding the best use for the space. The venture analyzed many redevelopment concepts before settling on self-storage combined with small-scale office/retail as the best option. Although the design went through a number of iterations, the final layout consists of 65,000 net square feet of storage in 600 unitsthats phase 1. In phase 2, restaurants, retail and office space are added, giving the complex a distinct marketing advantage.

The self-storage portion of the master development plan is critically important to the overall financial feasibility because of the positive cash flow it will provide without a significant impact on space for parking, explained Chiswell. Despite the massive column-free plot, alterations were necessary to adapt new building and fire-code systems. H2P contracted The Rabco Corp. to build a new one-story building within the larger hangar shell without affecting the historic features. The connection of storage walls, roofing and other components to the atypical shape and size of the building caused some clever challenges for Rabco and Janus International, the supplier of hallway components and roll-up doors, as they didnt always match up with a typical 10-foot module.

Each unit that backed up against the historic hangar doors had to be fit differently by our installers, explained Pat Nesbitt, technical sales manager for Janus. H2P chose gloss-white doors and partitions for a clean look, brightness and lighting efficiency. Flush panels were also used, which furthers assists in light reflection.

With a roof peak of 90 feet, temperature control was also a factor. Rabco brought down the roof system to harness the temperature from 12 feet and lower, the optimal cubic space for the projects climate-controlled storage. H2P was able to incorporate a drive-through unloading corridor that allows customers to be totally out of the weather when accessing their storage units. The joint venture has found that protecting tenants from the rain, snow or sun provides a unique marketing advantage that attracts residential and commercial tenants. However, it was complicated to achieve this goal; it required a great deal of negotiating to reach an agreement with the building and fire departments.

Successfully integrating and testing those systems and making them operational was a real challenge, but one that was essential to achieve full code compliance.

Hangar 2 offers vast amounts of natural daylight through its existing glass doors, and its curved, southeast-facing roof is ideal for producing solar power, which plays a significant roll in the project. More than 500 solar panels were installed on the roof by Martifer Solar. The three rows of panels were designed to replicate the look of the old hangar's skylights, preserving a little touch of building history. 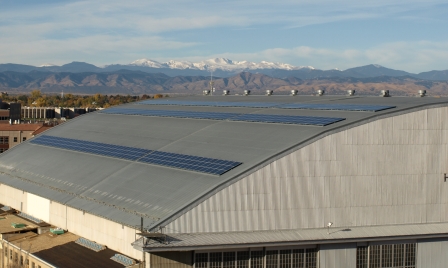 The photovoltaic panels convert solar radiation into direct-current electricity. Theyre expected to provide at least a third of the energy required to run the building. Due to its energy-efficient features, Hangar 2 has the ability to use only half of the energy required by typical buildings of the same size. The project incorporates energy-efficient lighting, heat controls, motion-sensor light switches and premium insulation. Together these sources of clean energy will promote environmental sustainability, combining sophisticated energy technologies with the historic integrity of the building.

The hangars solar power system cost approximately $500,000, but with support from the federal government and a rebate from Xcel Energy, the net costs will be much less. Over the course of one to two years, Hangar 2 will recoup the cost of its solar-power system and enjoy the benefit of free, clean energy for the next 30 years.

The solar-power system is one of the largest and most visible examples of a building-integrated photovoltaic installation in the country, said Hartman, a partner in HEI. Hangar 2 stands as Lowrys solar symbol. In fact, onlookers cheered as the first panels were set in place. He suggests that anyone considering a solar installation should not ignore the significant marketing benefits in addition to the financial benefits before making a decision.

HEI and Larimer Associates have a unique relationship with the Lowry and Denver communities. Since both companies are well-trusted in these areas, they were able to pre-lease five large storage units at market rate for a year to a local business tenantall before construction even started. H2P also holds periodic community events within the expansive drive-aisle space and recently started the Lowry Farmers Market at Hangar 2. These types of relationships and community events integrate the hangar into the neighborhood in a symbiotic way thats very unusual for a self-storage facility.

H2P has incorporated 12 spaces for the Lowry Dining District in phase 2 of the project, which was designed by Semple Brown Design of Denver. Currently theres also a yoga studio, and future plans call for the Lowry Dog Spa & Hotel. Negotiations are in progress to lease another 2,500 square feet of retail space to a restaurant.

H2P, which had to get landmark commission and community approval to build its project, is indebted to many local and regional public officials who played a part in its success. Those agencies include the Denver Urban Renewal Authority, who provided essential financing for the project, the Lowry Community Master Association, the Lowry Redevelopment Authority and the City of Denver. FirstBank of Denver was also a key private-sector team member, providing the bulk of the financing to get the job done.

Since the project opening in March, public reaction has been positive. H2P has aggressively marketed the self-storage component with an open house, local media outreach, direct mail, e-mail blasts and personal calls.

Hartmans biggest piece of advice for those tackling a historic-building conversion? Start early with the code approvals. It takes an incredible amount of time. But its time well spent, as Hangar 2 has secured its place in the self-storageand historichall of fame.