What Would You Do? Reacting to Trying, Unforeseen Incidents in Self-Storage Management 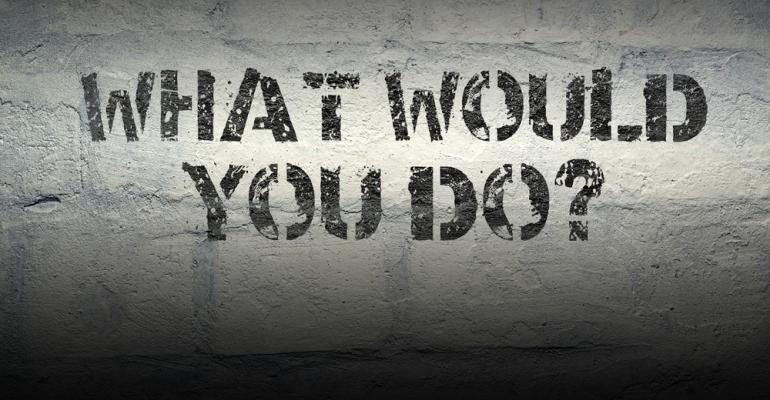 If you work long enough as a self-storage facility manager, you’re bound to be confronted with tough, unexpected situations that disrupt business operation, such as a disaster or crime. Learn what you need to “hold your own” in the face of stressful incidents.

One of my favorite TV shows is ABC’s “What Would You Do?” John Quinones and his team go into businesses and set up hidden cameras, then send in actors to create scenarios involving suspicious customers, bad service and other trying situations. It’s interesting to see how employees respond to various circumstances.

Some of the incidents depicted on the show also occur to us in a self-storage setting. How we as facility operators react impacts the business. Let’s examine a few scenarios and discuss the best ways to handle crazy incidents on our properties.

A tenant stored a piano in his unit, with plans to sell it. One night, when the temperature was going to dip below freezing, he got worried the cold might damage the instrument. So, he decided to plug in an old light he’d just rewired in an effort to heat the unit. After he left, the wiring shorted out, sparking a fire and setting off the sprinklers in that part of the building.

The manager on duty, Paul, took quick action, calling the fire department. The scene was chaotic, but he led the responding firefighters to the blaze, and the crew was able to contain it to just the front corner of the affected unit. Unfortunately, smoke and water impacted a total of 10 spaces.

Paul and his team contacted all affected customers to let them know what occurred and give them information on next steps, which included coming down to the facility to inspect their belongings for damage and process any insurance claims. Paul also called a remediation company to remove the water from the affected units. In the end, tenants appreciated the great communication Paul and his team provided.

A customer came in to rent a 10-by-15 unit, and Rick, the store manager, immediately felt something was amiss with the young woman standing in front of him. Still, she had all the necessary credentials and financial resources to rent the unit, so he proceeded with the rental. The woman indicated she’d move her belongings in that evening. Rick reminded her that access hours ended at 10 p.m., and the customer said she understood.

Rick had worked in the industry for several years, and his intuition told him something wasn’t quite right with this tenant. Just after 10 p.m., he decided to check the loading-bay camera feed from his cellphone. He could see the new tenant had a moving truck pulled up to the bay and was unloading items. He also noticed the access doors were propped open so she could bring stuff inside. As Rick watched, another vehicle pulled up, and the tenant spoke with the driver.

Rick was now on full alert. He contacted his new customer the next day and asked her to come to the facility for a meeting. He showed her the video and reiterated the property’s policies regarding access. He also reminded her that if she didn’t abide by facility rules, there would be repercussions. The tenant apologized and again indicated she understood.

The next night, a similar scenario played out. The same tenant was back with a moving truck at the loading bay, and again, another vehicle arrived, with the driver conversing with the tenant. Though the customer didn’t break any policies this time, Rick knew he’d have to keep a close eye on her.

On the third night, the tenant again arrived in a moving truck, only this time, she stayed until 4 a.m. Rick could sense something had gone down. When three neighboring businesses alerted him that items in front of their stores had gone missing, he pulled up the facility’s video footage. He could see people taking the items in question and putting them in the tenant’s truck as it exited the property.

Rick immediately contacted the police. Investigators determined the moving truck was stolen and the tenant and her accomplices were known to authorities. The police waited for the thieves to return the next night and nabbed them. The stolen items were recovered and returned. The police also retrieved stolen property from other crimes the group had committed. In this case, Rick’s “spidey sense” and monitoring of the situation helped to quickly capture these sticky-fingered criminals.

One October morning, an assistant self-storage manager was conducting a morning lock check when she noticed someone had damaged the corner of one of the storage buildings. She immediately called the facility manager, who walked her through the steps she’d need to follow.

First, she called a local masonry company to assess the damage as quickly as possible. Workers shored up the wall to keep the roof from collapsing and said they’d be back the next day to complete the work and ensure everything was correctly supported.

The assistant took photos of the damage and filled out an incident report, which she e-mailed to the district manager and support center. This was company policy to keep everyone on the same page regarding the repairs needed and associated costs. An incident folder was also created to keep track of all related paperwork.

Once the wall was no longer a danger, the video-surveillance system was accessed to determine who had caused the damage. While the manager was doing her investigative work, a customer walked in to report he’d accidentally hit the wall while backing up his vehicle. The manager thanked the tenant for being so forthright, effectively turning what could have been an adversarial situation into bonding moment.

It also enabled her to comfortably ask the tenant for his insurance information, so a claim could be submitted. The masonry company’s quote was sent and approved by the tenant’s insurance company, and the appropriate repairs were made to the building.

All these scenarios share common denominators in how to manage critical incidents. Remember the following:

If you work in the self-storage business long enough, you’ll deal with all sorts of unexpected situations. How you respond to these incidents can make all the difference in maintaining order and preserving a successful and functional operation.

Derek Hines is a writer for West Coast Self-Storage, a self-storage management, acquisitions and development company with facilities in California, Oregon and Washington. He writes extensively on all subjects related to the storage industry. For more information, visit www.westcoastselfstorage.com.

Sold! Strategic Tips to Help You Get the Most Out of Your Online Self-Storage Auctions
Jul 05, 2022

Before It Strikes: How to Brace Your Self-Storage Facility for an Incoming Disaster
Jun 25, 2022
Self-Storage Lien-Law Changes Take Effect in 4 States on July 1
Jun 21, 2022