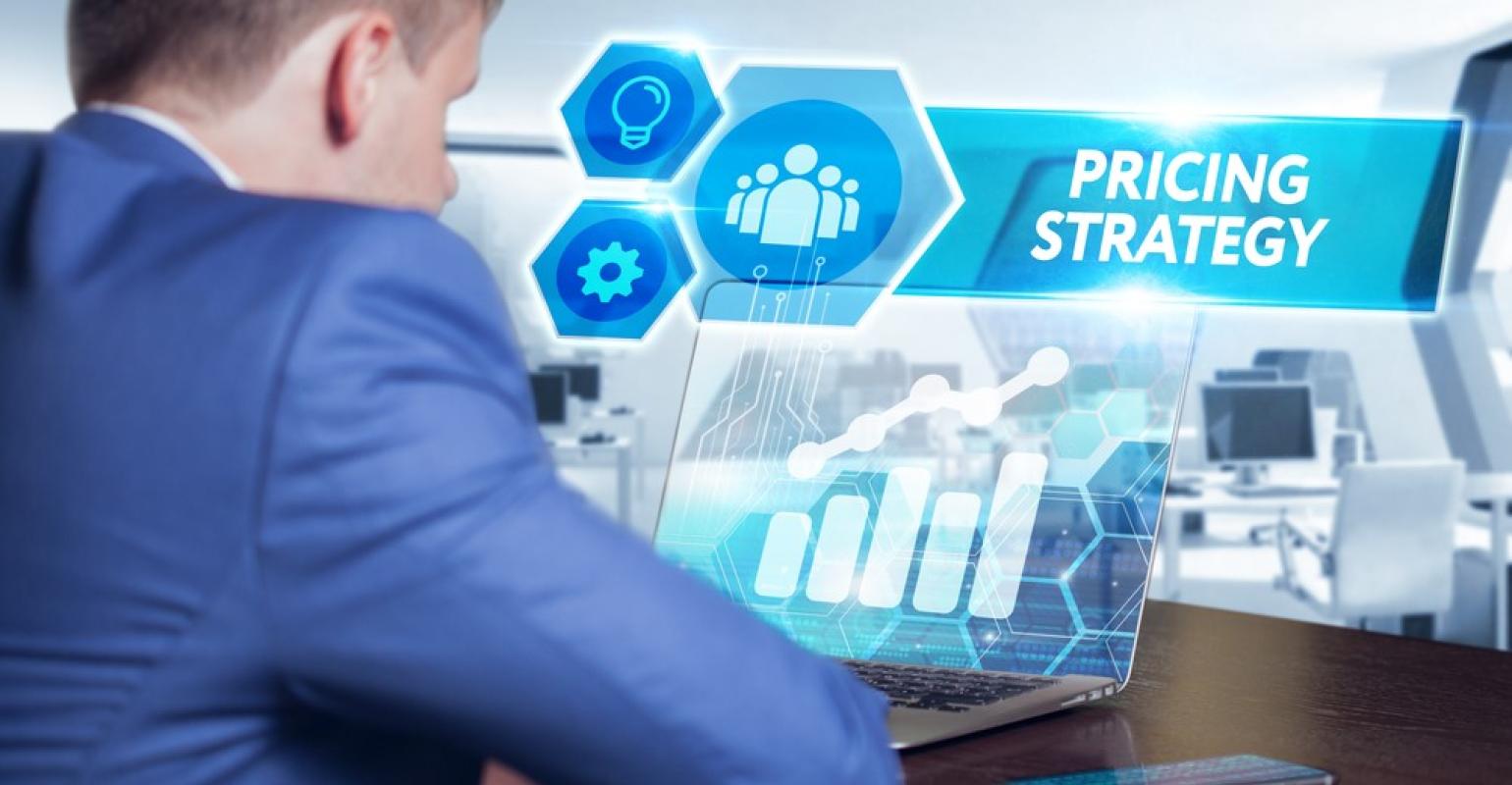 COVID-19 has certainly changed the way self-storage operations function, but what effect has it had on unit pricing? An expert dives into data from nearly 10,000 facilities to understand how facility operators are approaching rate management during the pandemic.

The COVID-19 health crisis has dramatically altered the way self-storage companies conduct business. Contact-free rentals, online unit reservations and greater emphasis on search engine optimization are just a few of the themes that have become increasingly common. Many of the new and revised policies and procedures that have been implemented in the past few months are likely to be with us for quite a while.

To thrive in the current environment, it’s critical for self-storage operators to also adjust the way they handle their unit pricing. Let’s examine the behavior we’ve seen during the pandemic and some strategic actions you can take to build a financially stronger company.

For this article, my company analyzed self-storage prices collected from the websites of approximately 10,000 facilities operated by almost 1,000 companies. Data was collected daily from Jan. 1 through June 15 for locations in California, Florida, Georgia, Illinois, North Carolina, Ohio, Oregon, Pennsylvania, Tennessee and Texas.

How and When Did Rates Change?

Though this article focuses on self-storage pricing for new customers, it’s worth making some quick observations regarding rent increases for current tenants. With relatively few exceptions, increases were put on hold for several months at the outbreak of the virus, when shelter-at-home orders and state pricing restrictions took effect. Though some operators scheduled increases to be effective in July, it appears many more targeted August to resume rate hikes.

In terms of rental rates for new customers, many self-storage operators simply chose not to change their pricing. Nearly 50 percent of the companies surveyed didn’t change prices during the data-collection period; however, those operators accounted for fewer than 700 of the nearly 10,000 facilities in the sample. Table 1 below shows monthly pricing activity. We can see that a greater, but relatively stable, percentage of operators changed prices infrequently (i.e., website prices didn’t change for at least a month).

We expected to see that more locations opted to hold prices in April, but that ultimately wasn’t the case. It’s also worth noting that in each month, approximately 10 percent of the stores didn’t change prices.

We can contrast this behavior with that of three self-storage real estate investment trusts (REITs). Analyzing the number of days each month in which prices were the same as the day prior shows a very different picture. REIT 1 changed its prices an average of two to three times per week; REIT 2 changed prices an average of one to two times per week; and REIT 3 generally changed prices a bit less than once per week. (For clarity, “once per week” means the price was constant on six of seven days, or 85.7 percent of the time.)

Interestingly, in April, when smaller companies were a bit more likely to keep their prices constant, REITs 1 and 3 were at their most active in changing prices. April was the second most active month for REIT 2. 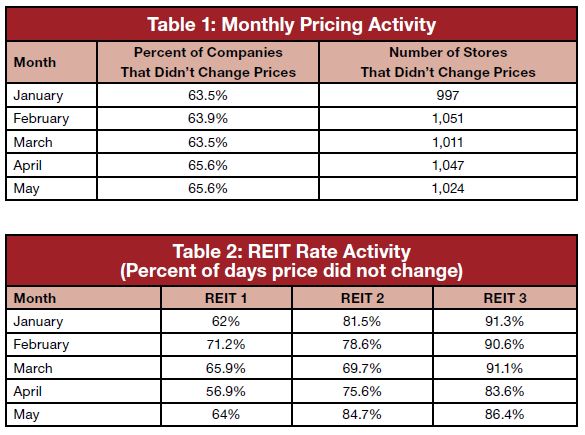 The data suggests that while the new business environment operators encountered in March, April and May did have some impact on the frequency of rental-rate changes, the effect was relatively small. To a large extent, the companies that weren’t actively managing their prices before March didn’t begin doing so. By the same token, those that did actively manage prices prior to March continued to do so.

Overall, 40 companies (about 4 percent) appeared to change prices at least twice per month on average, and slightly more than 10 percent changed prices at least monthly. While these companies tended to be larger, with many facilities, there were quite a few smaller operators that also actively managed their prices this way. When you consider that self-storage companies that don’t post rates online are generally less likely to vary their rates, the data suggests that active price management is truly limited to a relatively small portion of the industry (though these operators manage a lot of stores).

Did Anyone Increase Rates?

As each state declared a state of emergency, various price restrictions went into effect, with many states placing legal limits on the extent to which rates could be raised. Consequently, you might expect that operators would have been less likely to increase rates or, if they did, that the increase would be small. Is that what happened? Well, yes and no.

While there were some differences by state with respect to the amount of price changes, the pattern was relatively similar. As seen in Figure 2, roughly 50 percent of the day-to-day price changes exceeded 5 percent. Furthermore, the likelihood of a large day-to-day price increase (at least 5 percent) was about the same as that of a large price decrease. Perhaps even more surprising, approximately 10 percent of the price changes were increases of at least 10 percent, while 17 percent were decreases of at least 10 percent. This means companies that actively managed their prices were often willing to make relatively large day-to-day adjustments. 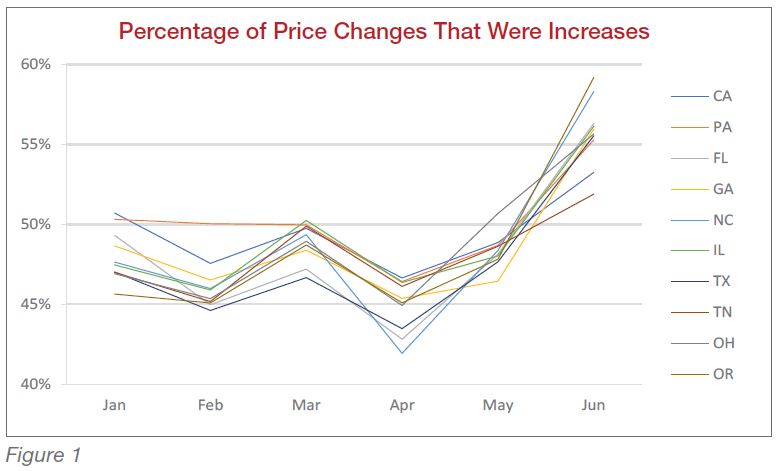 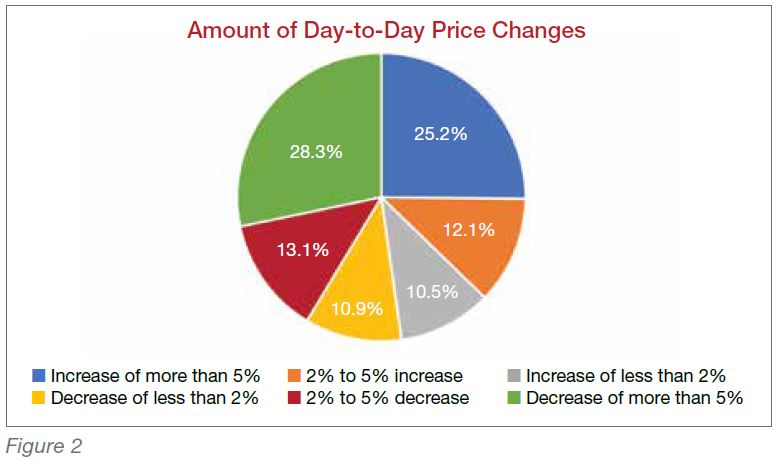 When Did Rates Change?

When operators chose to make changes is also interesting. Figure 3 shows that while modifications occurred throughout the week, prices on Wednesdays and Saturdays were most likely to be different from the day before. Wednesday also happens to be the day when large price changes were made most frequently. In fact, 60 percent of price changes exceeded 5 percent on Wednesdays vs. 47 percent on Mondays. 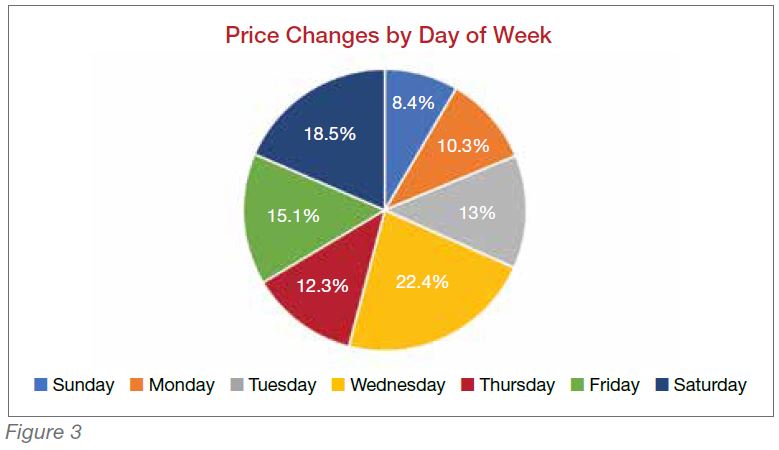 When it comes to website pricing, most self-storage operators appear to have adopted a “set and forget” strategy. This doesn’t necessarily mean they’re ignoring price, however. One possibility is that instead of raising or lowering rates, they’re revising their move-in promotions and concessions. However, the data shows that more than 90 percent of the companies that kept prices steady during January to May (409 of 451 companies) didn’t offer or vary any move-in promotions.

As might be expected, companies that actively managed their prices were also much more likely to adjust their move-in specials. In fact, more than 50 percent of the companies that varied their pricing offered multiple promotions. Those that varied their pricing more frequently also altered their specials more frequently, even if it was only in the wording. The takeaway is that although there are exceptions, rather than choosing between price or promotion adjustments, self-storage operators tend to actively manage both or neither.

So, How Do You Manage Your Own Pricing?

Based on prior research, self-storage pricing practices tend to vary more by operator than geography. Consequently, the actions you need to take will often depend more on who your competitors are than where your facility is located. If your primary competitors rarely change their pricing, you’ll want to be aware of the move-in promotions they offer and track when they change them to see if it has an impact on your move-ins. It’s generally sufficient to review these once or twice per month.

Conversely, if your rivals regularly adjust their prices and promotions, you may need to do the same. It’s wise to track those efforts as well.

Ultimately, in this competitive self-storage landscape, operators have adopted a wide variety of pricing strategies. When competing against those that don’t actively manage rates and promotions, you’re likely losing revenue opportunities if you don’t take advantage of their idleness. If you vie with operators that do regularly adjust prices and specials but choose not to actively manage your own, you may be at a disadvantage.

Even if many of the rate adjustments made by your competitors are small and don’t require a response, companies that actively manage their prices don’t appear to shy away from making significant increases or decreases in any business environment. If you choose to ignore the tactics of your competitors, whether in good, bad or unsettled times, you’ll likely do so at your financial peril.