Update 7/1/15 – SmartStop has broken ground on its $35 million Ladera Sports Center project. The multi-use complex, which is expected to open next summer, is being constructed on the “last available land approved for development in Ladera Ranch,” company officials said in a press release. The self-storage operator acquired the property in 2010. 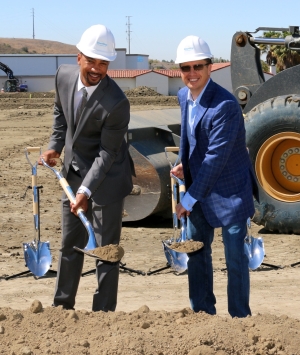 Update 7/1/15 – SmartStop has broken ground on its $35 million Ladera Sports Center project. The multi-use complex, which is expected to open next summer, is being constructed on the “last available land approved for development in Ladera Ranch,” company officials said in a press release. The self-storage operator acquired the property in 2010.

“We are excited to break ground on the Ladera Sports Center, a premier sports center for South County sports groups to finally have a place to call home,” Schwartz said. “Our main priority was to consider the needs of student-athletes by creating a safe, convenient home gym where they can coordinate their study time and workout sessions.”

Steve Williams, founder and CEO of Team Nikos Basketball Academy, will oversee the center and be responsible for managing its day-to-day activities, according to the release.

Some previously reported project specifications were revised in the news release. The accompanying self-storage facility that will be built as part of the project will comprise 42,000 square feet in approximately 230 units. It includes an expansion to the existing SmartStop location adjacent to the property, a private fitness center, and more than 15,000 square feet of office space reserved for the company’s expanding headquarters.

“My family has lived in Ladera Ranch for more than 13 years, and we strongly believe in this community,” Schwartz said. “This new sports facility will create additional jobs and generate more visitors to retail and restaurants with the goal of placing Ladera Ranch on the map.”

Last month, real estate investment trust Extra Space Storage Inc. announced it had agreed to acquire SmartStop for $1.4 billion. The deal is expected to close before the end of the year. Upon completion, Extra Space will claim ownership of 121 SmartStop facilities and assume third-party management of 43 other locations, according to an earlier press release. Prior to closing, SmartStop will sell one facility in California as well as beneficial interests in two locations in Alabama and five in Toronto. The facilities in Alabama and California will be managed by Extra Space.

8/4/14 – H. Michael Schwartz, chairman and CEO of Strategic Storage Trust Inc., a publicly registered, non-traded real estate investment trust that operates under the SmartStop Self Storage brand, received approval from the Orange County Planning Commission (OCPC) on July 24 to build a $32.6 million athletic complex and self-storage facility in Ladera Ranch, Calif. Schwartz purchased the land in 2010, according to the source. The 3.57-acre plot is adjacent to the company’s existing self-storage facility at 30 Terrace Road, which encompasses 100,000 square feet of storage space and more than 900 units.

The 119,000-square-foot, four-story Ladera Athletic Complex will feature a 56,800-square-foot gymnasium with eight basketball and volleyball courts. Video cameras will be installed on each court, with footage viewable online via remote capabilities, Schwartz told the source. The courts will be open to the public, including local high school sports teams, for a fee. Other players and club teams such as the National Junior Basketball, a youth league with more than 25,000 participants in six states, will also be welcome to rent court space, Schwartz said.

The 41,400-square-foot self-storage structure will include 255 storage units and more than 21,000 square feet of office space to expand SmartStop’s headquarters, the source reported. It will feature glass and a colored metal, wall-panel design, Schwartz told the source. Solar panels will be installed on the roof.

“It’s not a small endeavor, but we really believe in the community,” Schwartz told the source. “The mixed-use [project] financially makes sense. We can build the nicest indoor gymnasium in the [United States], and we need to expand storage space and offices for our growing operations.”

The project faced some opposition by the Ladera Ranch Civic Council, a recommending agency, during its July 21 meeting. Council members Robyn Moore Hubbard and Scott Weisgerber voted in favor of the complex, while Todd Stearns and Gary Kephart voted against it, saying they hadn’t had enough time to review the proposal or collect input from the community. Jeff Hamilton and Jett McCormick, who’s also a member of the OCPC, abstained from voting.

At the July 24 meeting, all four OCPC members voted in favor of the mixed-use project. Planning Commissioner Anthony Nguyen was absent. “It will be a great asset to the community,” McCormick told the source. “The developer has identified an underserved need in the community.”

Construction of the sports complex and storage facility will begin next spring, with completion slated for the end of 2015, Schwartz said.

Launched in 2008, Strategic Storage Trust operates a portfolio of 126 self-storage facilities in 17 states and Canada. Branded as SmartStop Self Storage, the properties comprise approximately 80,000 units and 10.5 million rentable square feet of storage space.