McElroy Metal, a manufacturer of metal roofing, metal siding and structural components, has released a new retrofit-roof system, 238T Retrofit Clip, for self-storage and other buildings with metal roofs. The company has received patents on two frameless systems—exposed fastener R-panels and 3-inch-tall trapezoidal standing seam—to recover the most prevalent metal-roof panels in open-frame metal buildings, according to a company press release. Both systems weigh about two pounds per square foot.

The 238T works with the company’s symmetrical-panel system by sitting between the ribs of the existing roof and holding the new panel above the ribs while attaching to the purlin below. When installed over an existing R-panel, the ideal width for the 238T panel is 24 inches, with clips attached to the purlins between every other rib. This system eliminates the need for sub-framing, the release stated. 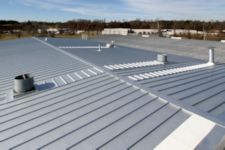 The metal-recover system can also be installed over traditional trapezoidal and R-panel roofing systems. The new roof will have no end laps because the panels can be site-formed in continuous lengths onto the roof using one of McElroy’s jobsite production vehicles, the release stated.

“We’re trying to increase the value for building owners by providing the most durable system at the lowest possible cost,” said Charlie Smith, national recover manager. “Basically, we use tall clips, fasteners and insulation. A major advantage in these systems is not having to add edge or corner framing to meet the wind-uplift pressures on the vast majority of existing buildings with 5-feet on-center framing.” 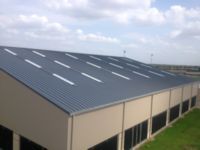 Metal buildings became a popular and economical method of construction in the 1960s and early 1970s. The R-panel and trapezoidal standing-seam roofs on older buildings are showing their age, according to the release. Metal-roofing manufacturers have been able to offer several options to repair these roofs, from re-roofing to metal-over-metal recovers.

Metal offers the best long-term solution, but price often pushes building owners to look for less expensive options, which are typically temporary alternatives to metal, the release stated. “The first thing [building owners] do is try a coating,” Smith said. “And they may get a warranty; but a coating is a Band-Aid, not a permanent fix. For about twice as much as a coating, they can go to a single-ply guy and get a 15- to 20-year warranty.”

Single-ply systems have been winning a large portion of these re-roofing jobs, according to Smith, and it’s all about price and perceived value. “Single-ply may not be the best solution in many of these cases,” he said. “There are aesthetic as well as attachment issues.”

Founded in 1963 and headquartered in Bossier City, La., McElroy Metal has 12 manufacturing facilities across the United States. The company is offering a limited number of 238T licensing agreements.