Update 10/4/18 – Generation4 has begun construction on its SpareSpace self-storage project on N.W. 30th Street. The facility is now expected to be complete next summer.

The company acquired the site last year for $2 million. It secured a $9.8 million mortgage loan from Branch Banking &Trust Co., according to the source.

11/30/17 – Commercial real estate developer Generation4 Partners LLC has acquired two parcels in Miami comprising .56 acres on which it intends to build a seven-story self-storage facility. The structure at 644 N.W. 30th St. in the Allapattah neighborhood will comprise 143,080 square feet of climate-controlled storage, including wine storage, according to a press release. The project is expected to break ground early in 2018, with an opening anticipated in early 2019. 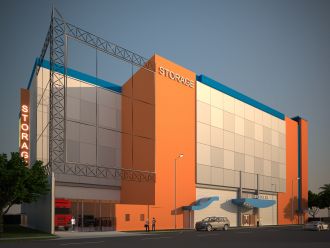 “This location has all of the components of a retail self-storage location that represents today’s institutional-quality self-storage development criteria,” said Howard Pryor, co-founder.

“The density of existing and under-construction residential units, coupled with high barriers to entry for new storage developments and a location that will have very significant visibility to more than 350,000 cars per day on [Interstate 95], is a combination that is rare to find in today’s competitive market,” added Travis Prince, co-founder.

The company expects to close on a construction loan in January, Pryor said.

Based in Ft. Lauderdale, Fla., Generation4 specializes in commercial development in Florida’s largest markets. It has additional sites under contract on which it expects to close in early 2018. The company is seeking sites suitable for self-storage alone or mixed-use projects, with a goal of building a portfolio of 1 million net rentable square feet, according to its website.

Rising to the Challenge: Building a Multi-Story Self-Storage Facility
Dec 16, 2020