Guardian Storage, which operates self-storage facilities in Colorado and Pennsylvania, has added a colorful mural to its property in the Shadyside neighborhood of Pittsburgh. The artwork at 5873 Centre Ave. spans 1,600 square feet across the loading-area wall. It’s meant to serve as a “thank you” to the community and a symbol representing the diversity of the region that hosts Guardian’s first site and corporate office, according to a press release.

The project began last year when Guardian commissioned Pittsburgh-based artist Maria DeSimone Prascak of Maria’s Ideas to bring its vision to life. Though COVID-19 created some obstacles, the mural was officially completed in July 2021. The community response has been overwhelmingly positive, the release stated.

“We are always focused on providing a great customer experience and adding value to our communities. The mural contains positive messages and vibrant imagery designed to be uplifting for our customers and the community as a whole,” said Steven Cohen, Guardian CEO and president. “We hope all of our customers can see themselves in this mural; it so beautifully represents the diverse community from which Guardian has grown.”

Cohen, a Pittsburgh native and entrepreneur, has expanded Guardian into a 31-property portfolio that remains locally owned and operated. An integral part of his strategy has been to build a strong brand known for quality properties and exceptional customer service, according to the release.

“We wanted the mural to be something everyone could enjoy, so we installed roll-up doors with windows to ensure the mural is visible to employees and passersby,” Cohen said. “It’s been great to see the smiles and energy it brings to the property.”

Guardian has long been dedicated to giving back to the communities in which it operates. The mural is the latest venture in its Guardian Gives program, a series of long-term commitments to support three key areas referred to as “Educating Our Youth,” “Neighbors in Need” and “Green Communities.” The self-storage operator has sponsored neighborhood gardens through the Western Pennsylvania Conservancy, supported food-insecurity programs, and hosted charity drives with partners Knock Knock Give a Sock and One Warm Coat. For the past six years, it has also worked with The Education Partnership and Kids In Need Foundation to adopt local schools in Colorado and Pittsburgh, providing supplies to help students in underserved areas.

“We’re always trying to be better than we were the day before,” Cohen said. “Our customers deserve that commitment. The mural is another way to strengthen our community ties and thank everyone for their support over more than three decades.” 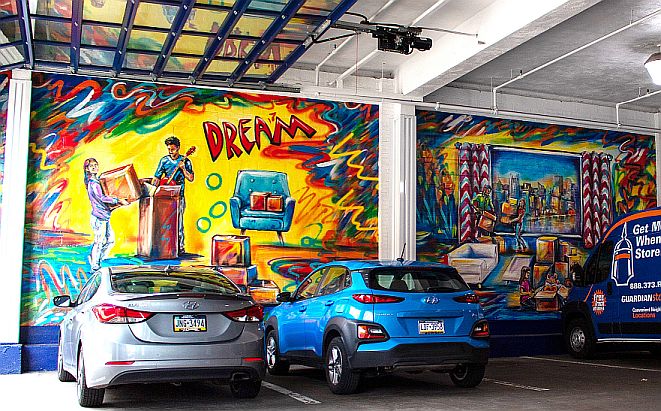 Now That Self-Storage Has Caught Up to Millennials, It’s Time to Start Thinking About Gen Z
Oct 22, 2021

Smart About Spending: Why and How to Set Your Self-Storage Marketing Budget
Sep 30, 2021

The Importance of Website Accessibility in Self-Storage and How to Meet the Criteria
Sep 21, 2021