When Police Want Access to Your Self-Storage Business: Understanding Subpoenas and Search Warrants 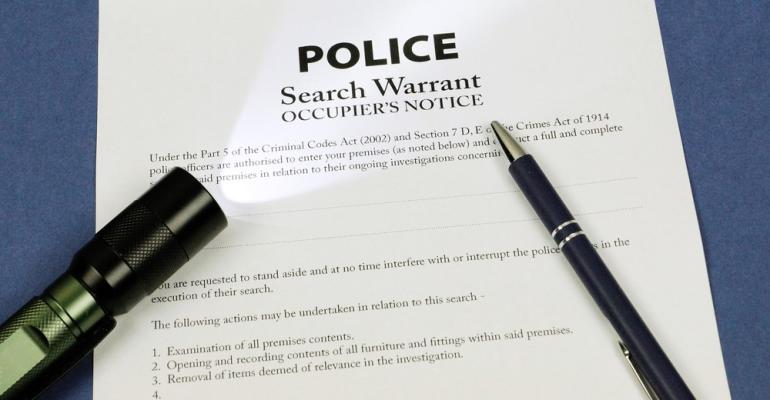 When law enforcement seeks information about one of your self-storage tenants or requests access to a unit, you might be concerned about what you can legally say and do. Is a subpoena or search warrant necessary? To help you understand your rights and protect your business, an industry attorney explains when these are required.

As a self-storage operator, what are you supposed to do when a law-enforcement officer requests information about one of your tenants or wants access to an occupied unit? Understanding your rights is crucial, especially as the resulting search has implications for the customer, your business and the law-enforcement agency.

Any concern is absolutely justified. After all, it’s disconcerting when police arrive, as it suggests there’s a problem on your property. It’s up to you as the owner or manager to properly handle the investigative process that’s about to occur. In general, here’s how you want to respond:

If the officer simply asks for what you’ve seen and heard concerning a situation, you can go ahead and provide that information. There are no privacy concerns about what you may have personally witnessed. There will be times, however, when an officer requests private tenant information or unit access. These cases could require a subpoena or search warrant. Consider the following guidance to understand what to expect and how to protect your business from liability.

When Is a Subpoena Necessary?

A subpoena is a court order. It doesn’t entitle the right to search but does require the recipient to produce the requested information. There are many situations in which a subpoena would be necessary. For example, if an officer asks to view a self-storage tenant’s file, which contains personal information such as address, Social Security number, billing info, etc., you’re within your rights to deny such a request until a subpoena is provided.

However, there are times when police can demand such information without a subpoena, such as during “exigent” circumstances when a person’s life is at risk. You should never refuse to provide information when an officer demands its turnover. That’s why it’s important to prepare an incident report to record the event. It may later turn out the search was unreasonable. If it was, you can’t be held responsible for providing the information, since its disclosure was incident to a demand from law enforcement.

Normally, a self-storage operator would resist providing information about a tenant based on a concern that they’re infringing upon that customer’s privacy rights. In most cases, it probably isn’t a violation to disclose the names of the tenants at your facility, as that information is part of the business records. However, for the company’s protection, it’s probably best to request that the officer first obtain a subpoena for the documents before you provide copies of any tenant files.

When Is a Search Warrant Needed?

If an officer asks to enter a self-storage tenant’s unit, the answer is the same as with a subpoena. Generally, you’re within your right to deny such a request until a search warrant is provided. But again, there could be exigent circumstances in which you shouldn’t refuse. The general rule is that the search and/or seizure of a tenant's property must be conducted only with judicial approval or, in other words, with a search warrant issued by the court entitling the officer to obtain access.

When an officer first requests access, ask them to produce the warrant. Review the document to confirm it properly identifies your storage facility as well as the tenant's name and unit number. If there’s any conflicting information, ask for clarification. For example, if name provided on the warrant doesn’t match the name of the person listed on the rental agreement for the unit in question, ask about it. Similarly, if you recognize the name but the unit number is wrong, let the officer know.

However, if the officer isn’t willing to clarify the warrant’s information and insists on proceeding with the search, don’t interfere. You aren’t expected to judge the correctness of a search warrant and can’t be held liable for obeying the commands of an officer acting within the scope of their authority.

As in all legal matters, there are certain exceptions to these rules. First, you can clearly allow an officer access to vacant units or any areas of your facility deemed to be common. However, if said access has been provided and the officer decides a rented unit looks suspicious and requires further investigation, they should return with a search warrant.

Another exception would be when an officer seeks access to a unit for which the tenant is delinquent. If you’ve already overlocked the unit or, better yet, cut the tenant's lock to perform inventory, it appears to be your right to allow access to that unit without a search warrant.

The case of State of Colorado v. Upshur (Colorado Court of Appeals, 1996) raised the issue of the landlord’s right to provide access to law enforcement. A self-storage manager contacted police about a series of break-ins at the property. He then told them about his suspicions regarding a specific tenant, who happened to be delinquent on rent. The manager notified the officer of the default and the business’ right to enter the space under the lease. He then offered to cut the lock to allow police to search the unit. Upon entering, the officer observed weapons and explosive detonators.

As part of the defendant’s motion to suppress the evidence, they argued the tenant hadn’t been delinquent and, therefore, the manager didn’t have the authority to allow access. The court concluded that even if the manager was wrong in their belief as to the right to enter, the police took their action upon the “objectively reasonable belief” that the manager had the authority to allow access and upheld the lower court’s denial of the motion to suppress.

In State of Wisconsin v. Thiede (Wisconsin Court of Appeals, 1981), the issue of “expectation to privacy” was considered. In this case, a self-storage tenant’s unit was opened and inventoried as part of a lien sale. Those conducting the inventory found two boxes they believed to contain marijuana. They contacted the police, and the tenant was arrested and charged with drug possession.

In attempting to suppress the evidence found in the storage space, the tenant argued he had an expectation of privacy to the contents of his storage unit and a search warrant was required. The court disagreed, finding that both the tenant’s rental agreement and the applicable law permitted the landlord to enter the space. Furthermore, the operator could consent to the warrantless search based on the tenant’s rent default and their enforcement of the lien statute. There was a similar holding in Harris v. State (Arkansas Court of Appeals, 1984) in which the court held that a self-storage owner had the right to permit law enforcement to enter the unit because the rent was six months past due.

There have also been cases that addressed the issue of plain-view searches and reasonable access. In State v. Bobic (Washington Supreme Court, 2000), the court upheld a search by law enforcement of one storage unit when viewed by the police from an adjacent empty one. It found police were authorized to look into the locked unit through a hole in the wall.

In U.S. v. DeTurbiville (Ninth Circuit Court of Appeals, 2000), the court upheld the right of authorities to enter a locked storage unit where permission was provided, not by the tenant, but a friend who’d been given the key and code. The court found the tenant assumed the risk that their friend would allow others to enter the space, even police.

Another issue that has come up in the context of self-storage and law enforcement is the right to have drug-sniffing dogs on the premises. In the case of State of North Carolina v. Washburn (North Carolina Court of Appeals, 2009), the defendant was being investigated for selling drugs based on a tip from an informant. Police were led to a storage facility, where they asked for permission to enter the premises and conduct a “random sweep” with a dog trained in drug detection.

The facility manager allowed the access, and the search was conducted in random areas. The police didn’t know where the defendant’s unit was located. Eventually, the dog alerted the officer outside a unit that turned out to belong to the defendant. A search warrant was obtained, drugs were found, and the defendant was arrested.

In seeking to suppress the evidence, the defendant claimed he had an “expectation of privacy.” The court relied on a number of federal decisions that clarified that the dog sniff of an area in front of a rented storage unit didn’t constitute a search. Moreover, in that the manager consented to allow the police to enter the facility, the need for an initial search warrant was obviated. The court found that police were on the property lawfully, and the motion to suppress was denied.

A similar situation led to a slightly different decision in State v. Carter (Supreme Court of Minnesota, 2005). In this case, the court agreed that while a drug-detection dog sniff in the area immediately outside of a self-storage unit isn’t a “search” under the Fourth Amendment of the U.S. Constitution, it would be considered as such under the Minnesota Constitution. Therefore, the need for probable cause must exist. Here, the facts that led to the search were found to be insufficient for the court, as statements that led to the issuance of the warrant failed to meet the basis for probable cause.

As police searches at self-storage properties occur more frequently, facility operators should consider amending their rental agreements to explain their and protections in these matters. For example, the lease should state that the business retains the right to provide authorities information concerning all its tenants. Such provisions may make you feel more comfortable answering questions about a tenant instead of worrying that you’re violating privacy laws.

Scott I. Zucker is a founding partner in the Atlanta law firm of Weissmann Zucker Euster Morochnik & Garber P.C. Practicing law since 1987, he represents self-storage owners and managers on legal matters including property development, facility construction, lease preparation, employment policies and tenant-claims defense. Scott is a presenter at industry conferences and the author of “Legal Topics in Self Storage: A Sourcebook for Owners and Managers.” He’s also a partner in the Self Storage Legal Network, a subscription-based legal services for self-storage operators. To reach him, call 404.364.4626, or email [email protected].

What You Need to Know About Recent Changes in State Self-Storage Legislation
Oct 22, 2021

The Self-Storage ‘Lien Hearing’: What It Is And What to Do When a Tenant Requests One
Sep 28, 2021

What the Heck Is Going on in There? When a Self-Storage Manager Needs to Sneak a Peek Inside a Unit
Sep 22, 2021