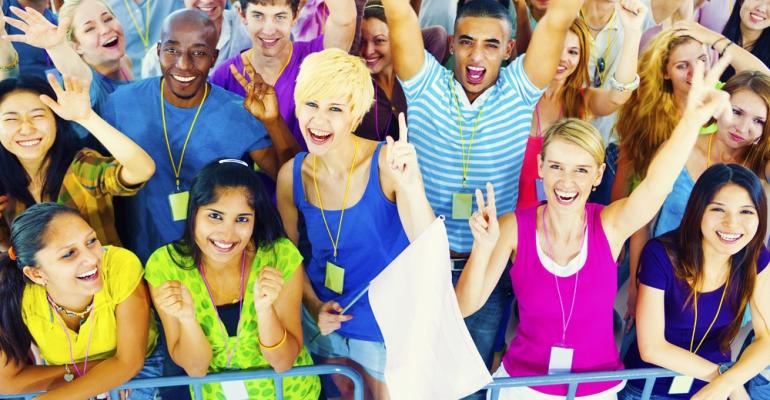 The self-storage industry continues to grow and prosper, and so does its largest conference and tradeshow. More than 4,000 professionals visited The Mirage in Las Vegas, April 1-4, to attend the 2019 Inside Self-Storage World Expo. Their primary goals? To learn, shop, mingle, and get inspired to do more and better business.

Shortly after being promoted, Heather Seldon and Kimberly Robinson approached their boss at StayLock Storage with just one request: to attend this year’s Inside Self-Storage (ISS) World Expo in Las Vegas.

“We’re such a new company and we want to learn everything we can about storage,” says Robinson, operations manager for StayLock, which has expanded its portfolio to 59 locations since its founding three years ago.

These ladies were among hundreds of other “boots on the ground” operators who attended this year’s show seeking guidance on how to manage business growth in a flourishing industry. Overall, the April 1-4 event at The Mirage Hotel & Casino drew more than 4,000 participants from all 50 states and nearly 30 countries. It also attracted more than 1,200 first-time attendees eager to learn.

“Our heads are still reeling a bit from all the activity,” says ISS Vice President Teri Lanza, who’s been with the brand for 20-plus years. “The energy, excitement and optimism around this year’s show was astounding. Yes, we had record attendance, which we love to see; but more impressive to me was the fervent interaction I witnessed, not only between experts and attendees but among fellow operators. People are thirsty for self-storage knowledge, and they’re asking all the right questions in 2019. It bodes very well for this industry.” 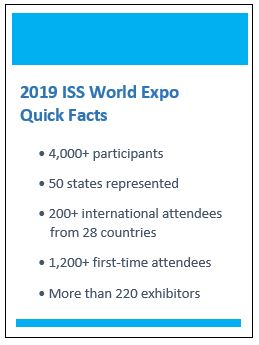 Much like the storage industry itself, the ISS World Expo education program experienced amazing growth this year. The move to a new venue allowed expansion to six education tracks from five, plus a complete International Program and full set of vendor presentations. Table Talks (formerly roundtable discussions) grew more than 30 percent, and there were four open-forum Q&A sessions this year rather than two as in past years.

It all started with four well-attended practicums on April 1, including the return of two Development Workshops. Also on offer that day were the revamped Digital Marketing Workshop, hosted by the team at Automatit Inc., and Legal Learning Live with industry attorney Jeffrey Greenberger.

The next morning, attendees enjoyed a keynote presentation by bestselling author, speaker and former stand-up comedian Brian Carter, who spoke about, “Eruption, Not Disruption: How to Bulletproof Your Self-Storage Customer Experience to Attract and Retain More Tenants.” Between sidesplitting anecdotes, Carter shared five keys to providing the ultimate customer experience and discussed ways in which technology and social media are changing the way self-storage operators interact with tenants.

Pumped from this early-morning kickoff, attendees then moved into the robust seminar program, choosing between the Building, Investing, Management, Marketing, Ownership and Technology Tracks. Many of this year’s presenters were self-storage managers and owners, and attendees truly embraced this peer-to-peer learning format.

“Seminars worked like clockwork, and our team was able to go to every seminar or workshop we wanted to,” says Alexander Haggar, general manager of Haggar Group, which operates 19 facilities under the StorWise Self Storage brand. “We learned a few marketing tips and some operational tips on maintenance and aesthetics.”

A new networking and educational opportunity that received rave reviews was the all-new Overtime With the Experts, which allowed attendees to engage in conversation and Q&A with presenters immediately after each seminar. Now, attendees needn’t rush the stage to interact with show experts—they get 30 minutes of quality time with them upon the conclusion of each session.

The education program continued April 3 with more seminars as well as the new and improved Self-Storage Q&A sessions. Rather than a single large forum devoted to all things storage, which was the format in years past, there were three separate events laser-focused by topic: Investing & Development, Management & Marketing, and Technology & Innovation. Each was led by two industry experts specializing in those fields. The new format was a real hit with attendees, who were able to drill down on the topics that mattered most to them. The popular Legal Q&A also returned this year, taking place after expo hours on Wednesday.

The final day of the show featured four more specialty workshops: Advanced Legal, Management Mastery, Owner Excellence and Staffing Success. The first three, while not new to the program, were all refreshed with new speakers and content for 2019, while the fourth was entirely new.

Overall, attendees found the comprehensive education program strong and insightful. “There were so many sessions that it was hard to decide which ones to attend,” says Paula Dukesherer, manager of Bolsa Chica Self Storage in Westminster, Calif., who’s now armed with new strategies to put into practice at her facility. “I have a few items that we need to add into our rental agreement to be sure we’re following current regulations, and I’ll also be increasing our fee for cutting locks,” she says. 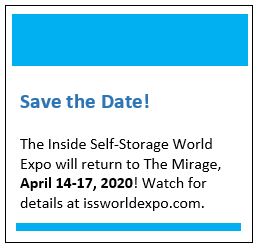 With nearly 30,000 square feet of space, the new venue enabled the ISS Exhibit Hall to grow significantly. Not only did the show boast more booths, they were larger and brimming with special features, from actual storage buildings and steel containers to moving trucks and lots of technology. An extra hour of exhibits on April 2 allowed more time to mingle with more than 220 product and service suppliers.

Beth Staudt, operations manager for Five Star Store It in Cleveland Heights, Ohio, was pleasantly surprised by the range of offerings. “It’s great that I can talk to three different vendors to get their ideas on specific issues,” she says, adding that vendors were very happy to share their expertise with her. “They can be a great sounding board.”

Creating lasting relationships with exhibitors is what draws Justin Jones, owner of Monument Court Storage in Concord, Calif., to the expo every year. “My return on investment in regard to the ISS World Expo has been off the charts for the many years I've been attending,” he says. “The relationships have paid off for me in real dollars due to meeting them face-to-face. When I call and need support, they know me, they take care of me. They know I'll see them again next year.”

In addition to a lounge area where attendees could relax, check e-mail or hold small meetings, the exhibit hall featured live product demos and the all-new Association Row, where attendees could speak with representatives from state and national industry associations. Additional networking events included the Buyers & Sellers Meeting and the evening cocktail reception that featured music and hors d'oeuvres as well as a special “selfie” station where partygoers could take photos with fun props.

Meeting other storage professionals was a highlight for Staudt, who planned to prepare a summary of her experience for her co-workers and executive team. “Just talking with other owners and operators is so valuable,” she says. “It was a wise investment to send me here.”

Trapped! When a Tenant Gets Locked Behind Your Self-Storage Gate After Hours
May 17, 2022

To Propel Your Self-Storage Operation Forward, the Name of the Game Is Integration
May 13, 2022

ISS News Desk: The Inside Self-Storage Store Platform Migration and What It Means for Customers
May 11, 2022

Want to Make More Money From Your Self-Storage Operation and Property? These Books Explain How
May 10, 2022