When it comes to President Donald Trump’s proposed tax plan, self-storage owners would be wise to prepare for coming changes. Follow these solutions to help you maximize deductions, lower income taxes and create additional cash flow.

Though it’s still early in the process and talking heads on both sides of the political aisle will continue to debate President Trump’s proposed tax changes, amid all the media speculation, no one is talking about what taxpayers should be doing in advance of coming changes. Smart advisers are telling clients to maximize tax deductions in 2017 because they’ll be worth less if the plan goes into effect and tax rates go down. Their strategy is to maximize deductions at higher rates and take lower tax rates in the future.

Like most building owners, self-storage owners like to expense everything. Unfortunately, the proposed tax codes set the stage to change that.

The newly revised Tangible Property Regulations of the U.S. Tax Code were designed to give guidance on what owners are required to capitalize and what they can expense. They have major economic benefits for owners of any type of building, especially self-storage. At the same time, they create compliance issues to which you should pay close attention. A reputable cost-segregation company teamed with a well-informed CPA can make this easy for you. In addition, here are several tax solutions to help you maximize deductions, lower income taxes and create additional cash flow.

The U.S. tax code allows building owners to depreciate their property in two ways. Straight-line depreciation slowly depreciates the whole building over 39 years. In this scenario, the tax code basically allows you to offset income by 1/39th of the cost of the building every year for 39 years. Cost segregation breaks a building into parts and accelerates their depreciation into shorter tax lives—most commonly five, seven and 15 years. This creates a large amount of depreciation in the first five years of building ownership that offsets business revenue, resulting in reduced income taxes. 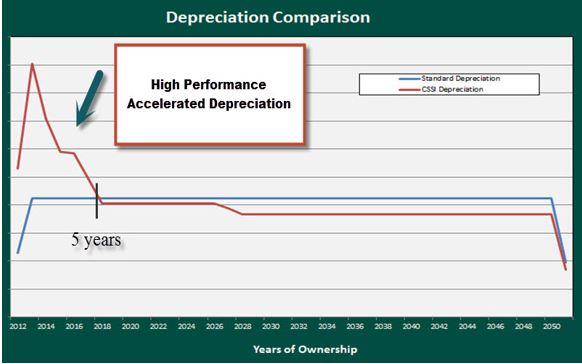 A cost-segregation study generates tax savings to the tune of $30,000 to $80,000 in additional cash flow per $1 million in building cost. Owners can maximize deductions at the higher tax rates and use the additional savings and time value of money to gain interest and invest back into their business.

Cost segregation is also the basis for allowing owners to capture other deductions. In the case of new construction or additions, a cost-segregation study will identify items that qualify for Section 179 and bonus depreciation, allowing for a significant amount of extra depreciation. Bonus depreciation on new construction allows the owner to capture an additional 50 percent on shorter class lives for 2017. This will reduce in 2018 and 2019 and eventually phase out.

Self-storage owners can particularly benefit from cost segregation and bonus depreciation because items like interior doors, moveable wall partitions, security systems, specialty lighting, landscaping and paving can all be accelerated. Did you renovate or remodel this year? A partial asset disposition (PAD) allows you to write down the basis of assets that were removed as well as the labor costs to eliminate and dispose of those items.

Typically, owners capitalize the entire renovation when some portion of the project can be expensed. You can receive a tax deduction in the same tax year as the renovation, but it’s a “use it or lose it” opportunity. If you fail to capture a PAD in the current tax year, the chance for the write-down is lost permanently.

Lastly, an engineering-based cost-segregation study will identify and value building systems and structural components. The tax codes give very specific guidelines on whether expenditures should be capitalized as an “improvement” or expensed as a “repair.” A building-systems definition is the basis for maximizing those expensed deductions. The new regulations also allow building owners to “look back” and expense large deductions in the current year by applying the regulations to prior years. Best of all, none of these strategies require an amended return.

A reputable cost-segregation firm will perform a site visit of each building, back up its work with proper documentation, and defend the work at no cost to the client should an audit ever occur. These firms work closely with your CPA or tax preparer to maximize deductions, while helping to maintain tax-code compliance.

Well-informed building owners (including President Trump) have used these tax strategies for years. Take advantage of them. Maximize deductions now and take the lower tax rates in the future. It’s the best of both worlds.

Warren Dazzio is executive vice president of Cost Segregation Services Inc., a provider of engineering-based repair regulations based on U.S. tax code, as well as cost-segregation and R&D studies in the United States. He has extensive knowledge of operations, sales and business development in multiple industries. For more information, call 225.367.1154, e-mail dazziow@costsegserve.com; visit www.cssistudy.com.

Is Your Self-Storage Business Struggling Due to COVID-19? Here Are 4 Stabilizing Solutions
Jul 01, 2020