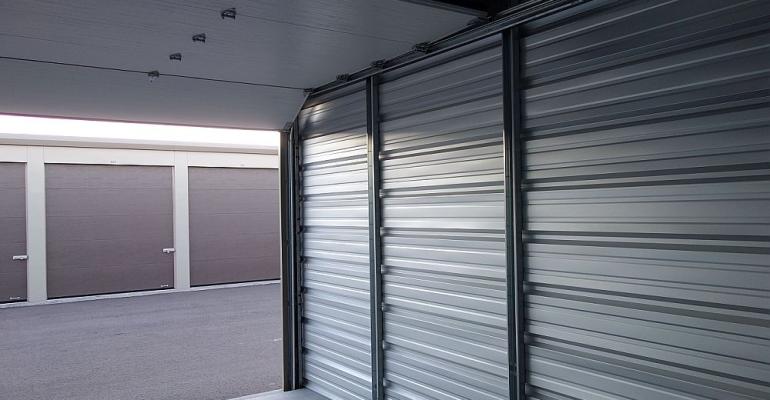 Many self-storage customers love the convenience of a drive-up unit, but they also enjoy the comfort and protection a climate-controlled environment provides. Must they choose between the two? Not anymore! Discover a cost-efficient way to integrate and offer both.

Did you know you can build drive-up self-storage units with climate control? Now that you know you can, do you want to? You will if you’re designing a facility with consumer preferences in mind.

How can this be? Won’t your energy bills be high due to losing precious climate-controlled air when a tenant leaves his unit door open? Not according to Jamie Lindau, self-storage product manager for Trachte Building Systems and the owner of a facility with these “unicorn” units. “Most tenants are only at their units for an hour. You can make drive-up, climate-controlled units more energy-efficient through the design process,” he says.

The tricky thing about climate control is there’s no standard definition for it within the self-storage industry. Often, temperature control (cooling and heating) is advertised as climate control; but this overlooks the most critical aspect for most self-storage preservation, which is moisture, according Brian Wolfe, vice president of technical services for Logis-Tech Inc., which designs and installs HVAC systems for self-storage.

“A sofa, a bed or most other items left in storage are not affected by temperature, but they can be destroyed in a short period from unchecked moisture or, more simply, from unchecked relative humidity. So, a ‘climate-controlled’ facility should possess the ability to stabilize both temperature and moisture,” Wolfe says.

It’s important to understand that these are not the same. An air conditioner will reduce humidity and lower the temperature, while a dehumidifier will remove excess humidity without causing a significant temperature drop.

Quest recently worked with a self-storage owner in Louisiana who controlled his building for temperature but not humidity. The facility was cooled to 61 degrees, but had 85- to 88-degree humidity and the units were covered in mold. Dehumidifiers were installed, and the owner was taught about the dangers of overcooling.

“You’re not trying to condition a self-storage facility for human comfort. You’re doing it for your tenants’ assets,” says Walt Waetjen, business-development manager for Quest, a manufacturer of commercial and industrial dehumidifiers. “Don’t set the thermostat to 72 degrees. It should be 80 to 85 degrees. The air conditioning will run less frequently, which decreases energy consumption and keeps the dehumidifier running more efficiently.

In addition to preventing and reducing the spread of mold and mildew from unit to unit, a dehumidification system can impede the ability of insects such as bed bugs and spiders to live and breed. Still, the need for a dehumidifier varies from region to region. A facility in the Pacific Northwest has different needs than one in Ohio, Waetjen explains. “The highest dew points in the country are in Louisiana and Florida. In the Midwest, facilities go from 85 degrees and 80 percent humidity during the day in the summer, and when nighttime temperature falls, they hit 100 percent humidity,” he says. 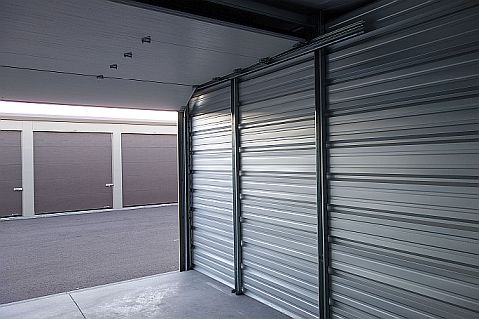 For the most part, weather west of the Mississippi tends not to require as much dehumidification, though there are pockets of California, Oregon and Washington where coastal conditions drive high humidity, Waetjen adds. On the other hand, dehumidifiers are a necessity for any self-storage facility east of the river.

When planning your HVAC system, each unit should be treated individually, with dedicated supply and returns. “Gaps between the top of the unit wall and the roof or ceiling can provide a quasi-return,” says Barry Fitzgerald, mechanical qualifying agent for Logis-Tech.

“It is important not to use a huge HVAC cooling system, as it consumes so much space,” says Lindau. “If you do, the duct is too huge to get in the way of the unit. You need round ducts and not the rectangular ducts. I recommend installing a vent in every other unit on the inside wall every 10 to 20 feet.”

The worst-case scenario with drive-up, climate-controlled units, is the HVAC and dehumidification systems might run continuously until the relative humidity/temperature setpoint is reached, Wolfe says. He recommends you get educated on the process while carefully implementing the right design to mitigate potential energy waste.

When developing drive-up, climate-controlled storage, insulated sectional doors similar to ones you might see on a residential garage provide enough R value in the insulation to contain climate-controlled air, explains Angie Guerin, vice president of business development for Mako Steel Inc., which specializes in self-storage construction. “While standard, metal roll-up doors can be purchased with some insulation value, these doors will typically not meet energy code,” she adds.

For the sides of each roll-up door, top-rated brush or equivalent seals are required, according to Wolfe. “Additional sealing considerations must be addressed for water intrusion under the door and to close gaps above the door. Seal, seal, seal and insulate, insulate, insulate.”

Speaking of insulation, it’s critical in this type of hybrid storage. According to Lindau, insulating the walls every 40 feet is a good rule of thumb. “That way when a tenant leaves his door open, you’ll only lose the controlled air in a few units, not the whole building,” he says.

Depending on the energy code in your area, you may be required to use continuous rigid insulation, so it’s critical to work with an architect who can run compliance checks based on local conditions, Guerin adds. The basic framing method used for this type of building is the same as for ambient buildings, “However, typically you’re upsizing framing members to create a cavity large enough to house the specified insulation. In a lot of geographic areas, this could mean upsizing from a 4-inch framing member to a 6-inch,” she says.

Also, consider adding a vapor barrier over the face of your insulation, which will cut down on the amount of humidity that seeps into your building, explains Waetjen. “For example, in a state like Oregon or Maine, you have an extremely large temperature differential from day to night during the summer months, which encourages moisture infiltration.” 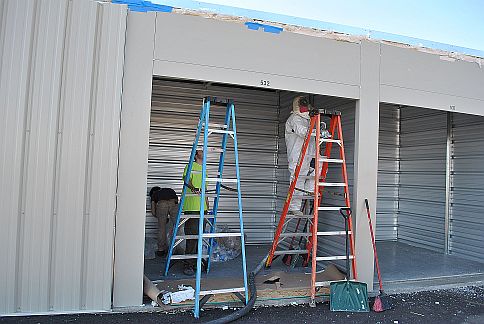 A contractor installing spray-foam insulation into a unit at Columbus Self Storage in Columbus, Wis. (Photo courtesy of Trachte Building Systems)

When deciding whether to develop drive-up, climate-controlled self-storage, your main concern should be increased construction cost and the potential for hiccups during the design phase, Guerin advices. The adoption of International Energy Conservation Code has made efficiency a national mandate. “While some jurisdictions will overlook it, many of them will require certain efficiency levels to be reached. This has increased the amount of insulation and sometimes the types of insulation that need to be specified, likewise increasing the cost,” she says.

Careful consideration should be given to the premium you can charge in rent to ensure the added design work and time to vet the approach are worth the investment. Lindau’s drive-up units command rates above those of competitors with standard climate control. In his market, a traditional 10-by-20 unit rents for $120, while an interior-access climate-controlled unit rents for $170. His drive-up, climate-controlled units go for $200.

You also need to think about the customers who’ll use these units. Facilities with drive-up, climate-controlled units attract a higher-end tenant, according to Steve Hajewski, Trachte’s marketing manager. “These are wealthier people looking for climate-controlled convenience when they move homes,” he says. His tenants also include those seeking high-end storage for classic cars. “A few of my car-sized units have outlets for the ‘ultimate’ unicorn experience and a $30 per month premium. These are long-term customers who pay reliably each month.”

Another recent energy code to be aware of requires a thermal break in the building’s foundation when it has a mix of traditional and climate-controlled units, Hajewski notes. Developing all units in a building as climate-controlled eliminates this issue.

Overall, in addition to a significant marketing advantage and increased profitability, drive-up units that are controlled for both temperature and humidity give you reputation protection from angry customers with damaged items, according to Wolfe. And that makes this self-storage unicorn worth chasing.

Katherine D’Agostino is the founder of Self-Storage Ninjas, a self-storage feasibility-consulting firm. A former marketing-communications executive turned sensei, Katherine has a background that includes 24 years of creating and implementing business plans for a wide range of companies. A self-storage owner herself, she focuses on delivering unbiased reports that enable investors to make informed decisions. To reach her, call 402.570.5021; email [email protected].

Thirsty for More Profit? Advice for Designing Wine Storage as Part of Your Self-Storage Facility
Jan 21, 2022

The Beauty Inside: 2021 Showcase of Self-Storage Management Offices
Nov 19, 2021