Dominion Self Storage in Chandler, Ariz., designed by ARC Services Inc. and managed by 180 Self Storage, opened in October 2015. The exterior features a balanced mix of materials including stone piers, split-face concrete masonry units, steel canopies, and EIFS (exterior insulation and finish system) walls and parapets to create interest. It comprises 57,700 net rentable square feet of storage space in 505 climate-controlled units. It also has a 1,200-square-foot loading bay and two oversized elevators.

A Big Presence in Tennessee

Like many properties built in the early 2000s, Collierville Marketplace Self Storage in Collierville, Tenn., is sprawling. Built in 2004 and expanded in 2014, the facility is dominated by rows of storage buildings and wide driveways. It includes 71,100 square feet of space in 558 units. Photo courtesy of Absolute Storage Management Inc.

A Clean Look in Cary

55 Storage in Cary, N.C., was built in 2013 and designed with the neighborhood in mind. The developers wanted a clean, crisp look similar in style to surrounding developments. The facility features metal construction with brick and split-faced block. It offers more than 69,000 square feet of storage space in 626 units. Photo courtesy of Absolute Storage Management Inc.

Blending With the Dallas Community

Advantage Storage in the affluent Dallas suburb of Lake Highlands was originally designed to be a three-story structure. Ultimately, it was built as two stories plus a full basement to reduce the building height and encourage support from adjacent property owners. Opened this year, the facility was designed by David Baca Studios. The developer worked closely with the homeowners’ association to create a mid-century design that would blend with the surrounding community. The exterior features brick, textured and polished concrete masonry units, simulated-wood wall siding, a brightly colored fiber cement-wall panel system, and painted steel awnings.

Keylock Storage in Meridian, Idaho, a growing suburb of Boise, opened in April, including a conference room and large retail office. It also provides enclosed RV parking. The company plans to double its number of storage facilities in the next 18 to 24 by building new facilities and acquiring existing ones across the Northwest.

Big and Bold in Georgia

Chatham Parkway Self Storage in Savannah, Ga., opened in September 2008. The 100,350-square-foot, 858-unit facility, designed by John Leonard at The Rabco Corp., was created to stand out in the market and withstand the harsh coastal weather. Building materials include a hard-coat stucco exterior with hurricane-proof windows and roofing. The property features a large, elaborately decorated office and Southern-inspired landscaping. It was purchased by Public Storage Inc.

StorageMart purchased this former Cherry Hills Storage in Omaha, Neb., in January. Built in phases between 2005 and 2007, the large property consists of 531 units. The site offers interior and exterior vehicle parking as well as large units up to 16-by-50 feet.

Safeguard Self Storage continues to increase its presence in the South Florida market, including opening this facility, which it purchased in late 2014. The property comprises 53,500 rentable square feet of space in 700 units. The company also recently opened a 500-unit expansion of its Design District store in Miami and completed a 193-unit expansion of its Palmetto Expressway property.

A Grand Entrance in California

StorageMart purchased this former Store More America facility in Watsonville, Calif., for $19.4 million from Meritage Real Estate Development Group Inc. Built in 1985 on nearly 6 acres, the property was expanded in 1999 and 2014. It comprises 106,818 net rentable square feet of storage space in 918 units, and features an enclosed loading area.

Fort Knox Self Storage recently opened this purpose-built facility in Keysborough, a suburb of Melbourne, Australia. Construction was completed in just nine months. The three-story facility comprises a 4,500 square meters of storage space in 1,200 units. Additional features include a boardroom, a customer-waiting area, vehicle storage and wine storage.

Hide-Away Storage in Ft. Myers, Fla., was built in 1997 and designed by Design Team West/Mike Carter Construction of Bradenton, Fla. It comprises 120,000 square feet, and uses a variety of materials such as masonry and metal. The architect aimed to make the buildings easily recognizable as self-storage yet fit attractively into the surrounding shopping center.

Here’s another conversion success story by Metro Storage. This time, the operator transformed a former Dodge auto dealership in the Minneapolis suburb of Blaine, Minn., into a sprawling storage property. The multi-story facility encompasses 75,000 rentable square feet of space in 627 units.

Abby Self Storage in Doral, Fla., was part of the 27-property portfolio purchased by Strategic Storage Trust II Inc. from Mindful Storage in March. The acquisition set the company back $371 million. The property appears to be managed by Extra Space Storage.

Bargain Storage has 32 properties in Arizona, Colorado, Oregon and Texas. Its building materials are a combination of masonry, metal and stucco, and all use the company’s signature color. Opened in 1985 in Mesa, Ariz., this facility comprises 63,480 square feet of space in 562 units.

This Extra Space Storage in San Antonio was designed by Kaufman Design Group and opened in 2015. It’s constructed of corrugated metals, stone veneer and EIFs stucco walls. Glass was used to showcase the faux doors to drive-by traffic. It also uses the Extra Space brand colors—wasabi green and gray.

This CubeSmart in Long Island City, N.Y., sits on a busy corner. Designed by Butz-Wilbern Ltd., the facility opened in 2014 with approximately 89,000 square feet of space in nearly 2,000 units.

BoxVault Self Storage in the Miami River District, an up and coming neighborhood near downtown, includes a gigantic mural. Opened earlier this year, the property comprises 69,325 square feet of space in 823 units. Plans for a ninth-floor restaurant complete with a view of the Miami skyline is in the works. The property is managed by Sentry Self Storage Management.

Sentry Self Storage turned a previously drab building in the Wynwood Arts District of Miami into an eye-catching structure. The area, full of old manufacturing buildings and warehouses, was undergoing a redevelopment when the company took on this project in 2011. With the goal of keeping with the community’s artistic look, the company offered a $5,000 scholarship to Miami International University of Art & Design students to design and produce three murals for the property.

A Fresh Appeal in Toronto

This Spaces Self Storage facility is about 10 minutes outside of downtown Toronto. Comprising 130,000 total square feet over four floors, the property has an expansive office and 1,250 storage units. It opened in 2009.

Real estate investment firm Regency Affiliates Inc. entered the self-storage sector this year when it acquired the five-property Storage Depot Self Storage portfolio in Pennsylvania, which included this facility in Mechanicsburg. The acquisition was part of a joint venture with Self Storage Capital Partners. The property is spread over several acres. Adding a main building with interesting architectural elements provided a focal point for the expansive site.

Value Store It Self Storage in North Miami Beach, Fla., was built in 2005 on a pie-shaped corner lot. The developers aimed to create a building that offered great exposure to drive-by traffic. The facility comprises nearly 69,000 square feet of space in 755 units. It uses exterior EIFs, color and swaths of windows to emphasize its retail appeal.

Lots of Space in Lisle, IL

U-Store-It in Lisle, Ill., includes a drive-in building as well as drive-up units, plus interior and exterior parking spaces. The expanse of greenery adds to the property’s appeal.

Stor-N-Lock in Rancho Cucamonga, Calif., built in 2002, was designed by Valli Architectural Group. Improvements were made later by HBI Inc. The 104,000-square-foot building sits on 3.2 acres. The facade includes stucco and glass.

This Storbox Self Storage facility in Pasadena, Calif., was converted from a single-story warehouse. It was designed to blend with the city’s Craftsman and art-deco-style buildings. Architect Ken Carrell of ARE Associates opted for two stories to maximize space on the small lot. The property comprises 134,000 square feet, including 10,000 square feet of wine storage and 5,000 square feet of high-security art storage. With the frontage on a major street, glazing was incorporated around the office area to improve curb appeal.

This Storage Vault facility opened in Paisley, Scotland, last year. Just completing its first year in business, the company has three more facilities near completion in Edinburgh and Glasgow.

Cream of the Crop in Colorado

Public Storage Inc. picked up this primo property in Aurora, Colo., earlier this summer. The former Southlands Self Storage is adjacent to shopping centers and across the highway from Southlands Lifestyle Center, a regional shopping mall. Built in 2009, the seven-building facility offers 55,475 net rentable square feet of storage in 338 units as well as a manager’s apartment.

Simply Self Storage acquired this home-like property, formerly Surelock Self Storage, in Orlando, Fla., in February. Constructed in 2006, the facility contains 61,000 net rentable square feet and includes two pad-ready sites. Interesting note: All units at this facility have fire sprinklers.

A Southern Gem in South Carolina

Plantation Storage in Bluffton, S.C., was built in 1999 and designed to fit the region’s plantation style. The building has a stucco finish with a green metal roof, while the columns are finished in muted stone. Situated on just under 9 acres, the facility comprises 72,000 square feet of space in 650 units. The main building, seen here, consists of 1,600 square feet on each level. The retail office is on the first floor along with the wine cellar. Following a recent remodel, the upstairs is used as office space for Hilton Head Custom Homes. The architect was Doug Corken of Hilton Head Island, S.C.

Built along Pennsylvania Route 512 between the towns of Pen Argyl and Wind Gap in Northampton County, Pa., Columbia Self Storage stretches across nearly 4 acres. It’s on a busy highway, which sees up to 11,000 vehicles per day. Columbia recently acquired the property, formerly called Advantage Storage & Rental. Built in 2008, it has an office suite with a conference room.

Moove In Self Storage uses a barn-style front office to create brand awareness at many of its 15 facilities across Maryland and Pennsylvania. Phase one of this 10-acre property in Manheim, Pa., included a single-story building encompassing 79,200 square feet of storage space in 319 units. The facility also includes 1,200 square feet of management and retail space. Earlier this year, it was expanded with the construction of a new single-story building comprising 12,000 square feet of storage space in 100 units. Photo courtesy of Investment Real Estate Management Inc.

All Stor Self Storage in Austin, Texas, is about 10 miles northwest of downtown and can be seen from the heavily traveled, 27-mile FM 620. Opened just last year, the three-story building comprises 61,400 square feet of storage space in 583 units. It’s adjacent to a grocery-anchored shopping center as well as Steiner Ranch, a 4,600-acre master-planned community. CubeSmart purchased the property in May.

Compass Self Storage in Oxford, Fla., was constructed with a stucco façade and windows that extend from the floor to ceiling. The interior features polished concrete flooring. Built in 2014, the property comprises 84,150 square feet in 676 units.

Metro Storage LLC converted this former warehouse in Northbrook, Ill., last year. The company used large windows to create height and give the property a polished look. As part of the renovation, a second-floor mezzanine was added. The facility features multiple elevators and loading points, and a large, modern office.

New Designs on the Horizon

As self-storage continues to move from the back streets to Main Street, we’ll see more creativity in building design. Vibrant colors, patterns and shapes will be part of this evolution, as will new materials and architectural elements. This rendering of an MCSS Self Storage LLC development in Doral, Fla., is but a hint of what’s to come. The company is building several properties in urban infill markets in South Florida.

Seeing the Future in Miami Megacenter

Megacenter Brickell in Miami illustrates a new generation of self-storage. Designed by Borges + Associates Architect, the 12-story complex will feature six stories of storage, four stories of boutique office space, 111 parking spaces on the basement level, 10,000 square feet of retail on the ground floor, a rooftop terrace, and 57 workforce housing units. The project will also include a stunning wraparound mural that will change periodically. This stunner is sure to draw attention! 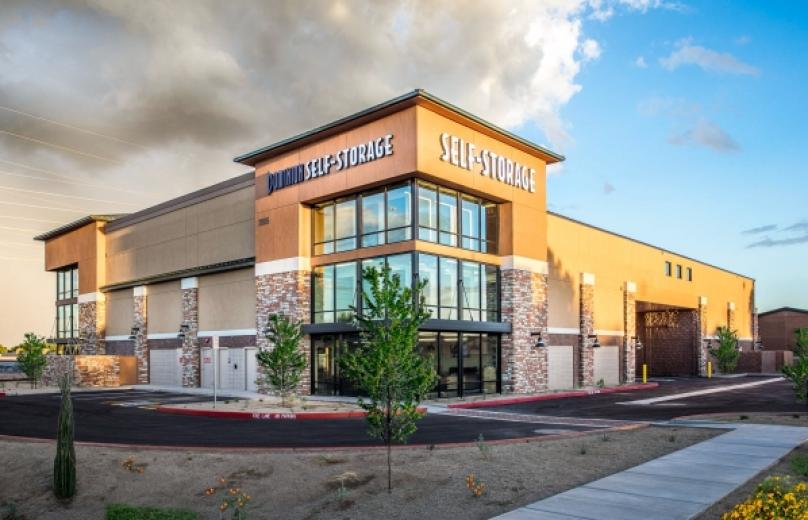 Next Up
A New Level of Self-Storage Sophistication: 2020 Facility-Design Showcase
Start Slideshow ›