ADVERTISEMENT
In Fort Worth, Bigger Is Better

You know what they say about Texas! This three-story Southlake Storage recently opened in Southlake, a suburb of Fort Worth. It comprises 104,000 square feet in 650 units and boasts a 1,300-square-foot front office. It’s owned by The Jenkins Organization, a Houston-based developer and operator of more than 60 self-storage facilities in five states. ARCO/Murray Design Build provided the architectural and engineering design, permitting, and construction. Austin Basher was the project manager. (Photo courtesy of ARCO/Murray Design Build)

A Colossal Site in Cary, NC

Space Shop Self Storage operates several multi-story facilities, including this sizable property in Cary, N.C. The brand is owned by Stein Investment Group, which has a portfolio of 18 properties comprising 1.2 million square feet in six states as well as five locations it manages for others.

Anchor Self Storage opened in Vallejo, Calif., in 2016 after the owners partnered with the existing landowner to obtain entitlements. The facility comprises 78,798 net rentable square feet in 636 units. The city has long been associated with the local naval base and a maritime culture. To maintain this nautical feel, the storage operator repurposed this genuine ship anchor for its curb-appeal display. (Photo courtesy of Cubix Asset Management)

Kennards Self Storage is one of the largest operators in Australia and New Zealand, with 90 locations. Valued at more than $1.3 billion, the portfolio comprises 600,000 square meters of rentable space. Pictured is the company’s facility in Rydalmere, New South Wales.

Oakley Gateway Self Storage in Oakley, Calif., opened in 2018 after its owners worked with city officials for more than two years. The site adheres to the city’s design code, incorporating a clock tower, rustic barn doors on the façade, and trellises on each side of the property where the neighboring vineyards flow. The facility has 78,771 net rentable square feet in 810 units. (Photo courtesy of Cubix Asset Management)

A Varied Design in Vancouver

Guardian Storage, which operates 26 self-storage facilities in Colorado and Pennsylvania, recently opened this lovely property in Aurora, Colo. It comprises 655 units in three buildings and has a 1,750-square-foot office. ARCO/Murray provided the architectural design, permitting and construction. (Photo courtesy of The Jenkins Organization)

How Sweet It Is

Although the lot is less than 3 acres, this Store Space Self Storage in Sugarland, Texas, manages to pack in a hefty 115,370 square feet of storage in 976 units. The company operates 30 facilities in 12 states.

Australian entrepreneurs Tim Manson and Byron Smith are building XSpace in Austin, Texas, shown here in a rendering. The site will feature customizable condominium units and high-end amenities, including a 3,000-square-foot owner’s lounge. The four-story, 90,000-square-foot building will offer 106 units, which start at 300 square feet.

Simply Self Storage opened this climate-controlled facility in Hauppauge, N.Y., about a year ago. Located just north of the Long Island Expressway, it comprises 84,915 square feet in 923 units.

A Façade With Finesse

Curry Road Self Storage in Tempe, Ariz., was developed by ARCO/Murray on behalf of Rincon Partners. Managed by Public Storage Inc. and branded under its name, the four-story building comprises 100,000 square feet in 723 units, with a walkout basement and 1,000-square-foot office. The façade is a mixture of masonry, wood veneer and architectural metal panels. Ben Graber was the project manager, and Matt Pitzen served as the superintendent. (Photo courtesy of ARCO/Murray Design Build)

My Neighborhood Storage Center in Orlando, Fla., is near The Mall at Millenia, an upscale shopping center. Built in 2017, the facility offers 90,000 square feet of climate-controlled and drive-through storage. It’s operated by Liberty Investment Properties Inc., which specializes in the development and operation of commercial real estate.

NorthPoint Development has built several new Beyond Self Storage facilities in the past couple of years, including this one in Robinson, Pa. Completed in 2018, it encompasses 106,170 square feet in 704 units. The facility was designed by the company’s in-house team of architects, studioNorth Architecture, with Martik Brothers Inc. serving as the general contractor.

Boardwalk Development Group LLC opened this facility a year ago in in Woodstock, Ga. The four-story, 100,000-square-foot property is managed by CubeSmart. It’s near the historic downtown center, which features an array of artisan shops, eclectic bars and restaurants, and mixed-use developments. The project was rejected twice by city planning commissioners and the council, only to be approved on the third attempt.

This rendering offers a peek at Airport Storage, which is slated to open soon in Austin, Texas. Developed by NitNeil Partners, the four-story facility will contain 100,000 square feet of climate-controlled storage. It’s near the intersection of Airport Road and E. MLK Jr. Boulevard, just two miles from the University of Texas at Austin and three miles from downtown. Once complete, it’ll be managed by Life Storage. (Photo courtesy of NitNeil Partners)

All Safe Self Storage recently opened this new facility in Summerville, S.C. The property comprises more than 55,000 net rentable square feet in 516 units. It also offers 20- and 40-foot vehicle-storage spaces. This is the fourth location for All Safe, which is owned by Everett Knight. It’s managed by Universal Storage Group, an Atlanta-based self-storage operator and third-party management firm. (Photo courtesy of Universal Storage Group)

Apple Self Storage operates nearly 40 locations in Canada, including this one in Mississauga, Ontario, which comprises 80,000 square feet of indoor, climate-controlled space. The family-owned business also offers day offices and executive suites at several of its locations.

Store It All Self Storage, which operates 19 locations in New Jersey, Texas and Vermont, recently purchased this expansive Noah's Ark Self Storage facility in Converse, Texas. East of downtown San Antonio, it comprises 82,960 net rentable square feet in 267 units and 149 vehicle-storage spaces.

Located in the Bass Plantation shopping center in Macon, Ga., this All-American Self Storage facility gets plenty of foot traffic. It’s also near The Shoppes at River Crossing, a lifestyle center that features shopping, dining, and entertainment activities. All-American operates seven sites in Alabama and Georgia.

The Envy of Arizona

Opened in 2018, this 85,000-square-foot Envy Self-Storage & RV in Gilbert, Ariz., was designed and is owned by Phil Gollon, who also own ARC Services Inc. It offers boat and RV storage, covered loading/unloading areas, and other key amenities. (Photo courtesy of 180 Self-Storage LLC)

Life Storage owns or manages 26 locations in San Antonio, including this beauty on Wilderness Oak. In all, the real estate investment trust operates more than 850 self-storage facilities in 29 states and Ontario, Canada.

Stein Investment acquired this facility in Hiram, Ga., in 2017, and later sold it to Extra Space. The original site offered 22,450 rentable square feet. Stein expanded it to 48,000 square feet and added a new office.

Standing Out in San Fernando Valley

Storage Etc. recently opened this mammoth facility on Topanga Canyon Boulevard in Canoga Park, Calif. Founded in 1999, the operator has built or acquired more than $100 million in self-storage assets on its own behalf or for other investors and owners. It owns or manages 26 facilities in California, Colorado and Utah.

Cedarwood Development, an affiliate of Cedarwood Cos., completed construction of this new facility in Orlando, Fla., just south of downtown. The property comprises 117,000 square feet in 787 units. It’s managed by US Storage Centers, the operating brand for Westport Properties Inc., an owner/operator with more than 9 million rentable square feet under management. (Photo courtesy of US Storage Centers)

The recently opened EaDo Storage takes its name from the area—East Downtown Houston—while its color scheme pays homage to the Astros and Dynamo sports teams. The property comprises 110,000 square feet in 850 climate-controlled and traditional units. It was developed by The Jenkins Organization.

Metro Storage LLC operates dozens of facilities in Atlanta, including this one in the Sandy Springs suburb. The interior units are 100 percent climate-controlled. Bonus: The property is near downtown, plus four popular golf courses.

Kennards Self Storage in Hoxton Park, New South Wales, is part of a private, family-owned business. Despite its growth, Kennards has been led by Sam Kennard, the grandson of founder Walter Kennard, since 1995. Sam has served on the board of the Self Storage Association of Australasia as well as for private companies.

The Jenkins Organization recently opened this Oak Hill Self Storage facility in Austin, Texas. It was designed and built by ARCO/Murray.

Completed last year, Simply Self Storage in Interbay, Wash., a suburb of Seattle, encompasses 165,768 square feet in 1,848 units. Simply owns or manages more than 100 facilities in Puerto Rico and the United States.

Stor-Age Property REIT hit a record when it opened this new site in Craighall, Gauteng, South Africa. It’s the company’s 50th location in country. With more than 600 units, it’s on a busy arterial leading into the Sandton and Rosebank suburbs.

Self Storage Plus, which operates 34 facilities in Maryland, Virginia and Washington, D.C., recently opened this site in Springfield, Va. The three-story facility is just off Edsall Road and sits on 2.26 acres. It comprises 101,938 rentable square feet in 1,262 interior, climate-controlled units and includes a cellar.

Life Storage operates more than 60 locations in New York, including this one in Jamaica, a suburb of Queens. The facility on Merrick Boulevard serves the communities of Rochdale, Springfield Gardens and St. Albans.

A New Approach to Condo Storage

This recently opened My Neighborhood Storage Center of Magnolia in Orlando, Fla., is part of a mixed-use development that includes retail shops and restaurants. The facility is also centrally located near Interstate 4, a bus stop and several other businesses.

Spreading Through the Southeast

The Space Shop Self Storage portfolio comprises 13 locations in the Southeast, including this large facility in Goose Creek, S.C. It’s located in a dense commercial area and serves the neighborhoods of Crowfield, West Greenview Acres and Woodland Heights. 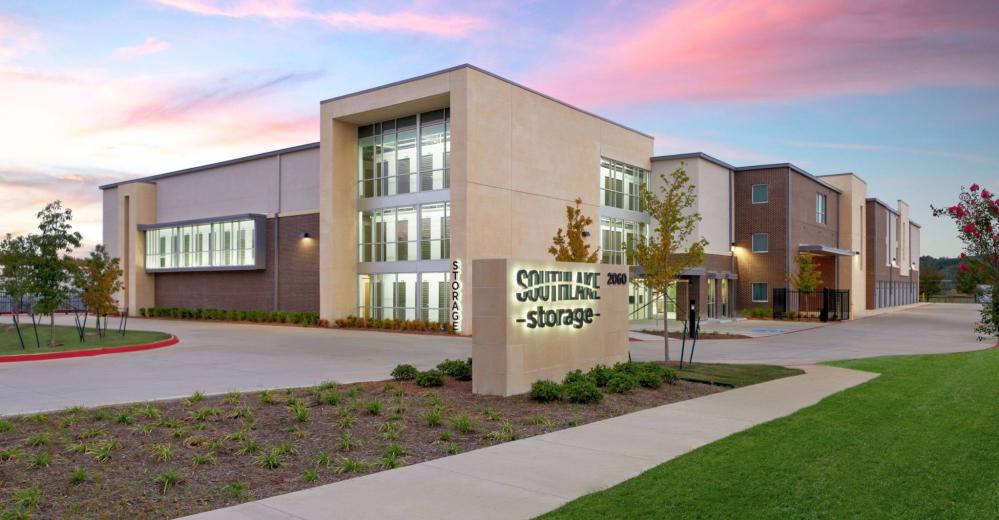 Next Up
Imagination and Luxury in Self-Storage Facility Exteriors: 2019 Design Showcase
Start Slideshow ›