The William Warren Group (WWG), a privately held real estate company that operates the StorQuest Self Storage brand, recently unveiled a seven-story mural at its Oakland, Calif., facility urging people to care for the earth. Titled “Love Me Before I’m Gone,” the artwork at 2227 San Pablo Ave., facing Interstate 980, is intended to urge the community to help heal the planet, according to a press release.

“This mural is a reminder for all of us to come together to conserve and sustain the beautiful world we all share,” said Michelle Bakva, vice president of marketing and sales.

As on another recent StorQuest mural celebrating NBA superstar Kobe Bryant, WWG again partnered with local street artist Ruben Rojas and community art project Beautify Earth. Rojas is known for his “love” signature, which is showcased on murals throughout Southern California and now in the Bay Area. 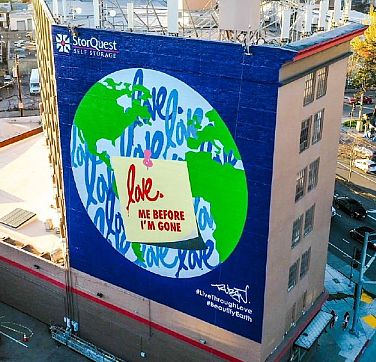 “Change will come when we take responsibility for our actions, when each individual chooses to make their difference in the world. The sum of those choices will shift humanity as a whole and help us heal our planet,” Rojas said.

StorQuest is also asking community members to spread the word about healing the planet by using the hashtag #RootForTheFuture in social media posts. The company is committed to corporate responsibility and doing its part to protect the environment and the local communities it serves. It plants one tree for every storage rental, and has contributed to 15 reforestation projects, with more than 50,000 trees planted nationwide in the past year.

Founded in 1994 and based in Santa Monica, Calif., WWG acquires, develops and operates more than 165 self-storage facilities in 14 states.