Update 10/30/15 – Murphy Brothers Contracting held a grand-opening and ribbon-cutting ceremony on Oct. 28 to celebrate the completion of Mamaroneck Self Storage. The event was attended by elected officials, local business associates, friends and family. A town proclamation, presented by Mamaroneck supervisor Nancy Seligson, was made in recognition of the service Murphy Brothers has provided to the Sound Shore community, according to a press release. 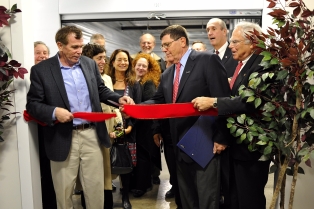 Update 10/30/15 – Murphy Brothers Contracting held a grand-opening and ribbon-cutting ceremony on Oct. 28 to celebrate the completion of Mamaroneck Self Storage. The event was attended by elected officials, local business associates, friends and family. A town proclamation, presented by Mamaroneck supervisor Nancy Seligson, was made in recognition of the service Murphy Brothers has provided to the Sound Shore community, according to a press release.

“The business council is proud to have members like the Murphy Brothers who represent the essence of what the Business Council of Westchester is all about,” said Ravitz, who served as master of ceremonies. “[They are] entrepreneurs who care deeply about their employees, are community minded, and continue to make their presence known throughout Westchester County.”

Additional ceremonial remarks were given by Otis, Plunkett and Rosenblum.

“It’s been a long time coming, nearly six years, but we’re thankful to be standing here inside Mamaroneck Self Storage, and there are a lot of people to thank,” said Sean Murphy.

Murphy Brothers is currently working with the Westchester Green Business Challenge to become the program’s first green-certified self-storage facility in the county.

10/5/15 – Murphy Brothers Contracting will hold a grand-opening event and ribbon-cutting ceremony celebrating the completion of Mamaroneck Self Storage on Oct. 28 at 4 p.m. Festivities will be held at the facility, 426 Waverly Ave., which offers 250 climate-controlled units, according to a press release. Refreshments will be served.

The event will also celebrate the company’s 36th year in the construction industry. "We see Westchester as a county of progress and positive change," Chris Murphy said. "Sean and I believe that Mamaroneck Self Storage is a big part of that positive change, particularly as it relates to our Sound Shore community and Mamaroneck's future industrial area plans."

4/23/15 – Murphy Brothers Contracting held a “topping out” ceremony this week to celebrate the installation of the last structural beam at its Mamaroneck Self-Storage facility being built in Westchester County, N.Y. The company is at the halfway point of construction, according to the source.

The last beam was signed by members of the construction team and others involved with the project. In keeping with an ancient construction tradition, an evergreen tree was placed at the top of the structure after the beam was placed. An American flag was also raised while a trumpeter played “God Bless America,” the source reported.

“It's amazing to think we were just here in September for the groundbreaking," said John Ravitz, executive vice president of the Business Council of Westchester. "The Business Council is proud to be affiliated with the Murphy Brothers. This facility is going to be a game-changer in this part of the county."

The self-storage development is the first commercial project in the tri-state area to feature solar roof shingles, according to the source.

12/31/14 – The Westchester Industrial Development Agency (IDA) has approved financing and incentives for the Murphy Brothers Contracting Mamaroneck Self-Storage project and three other Westchester County, N.Y., development projects. The four projects are expected to receive $71.5 million in private investment and generate 750 permanent and full-time jobs, according to the IDA.

The self-storage facility was previously awarded a $110,625 sales-tax exemption as part of $1.9 million in tax exemptions given to the four developments by the IDA.

The $3.5 million self-storage project is expected to create approximately 200 construction jobs and be completed by Labor Day weekend 2015.

"The sales-tax exemption from the county's IDA will go a long way in helping us to grow our new business venture in an exciting direction,” said Sean Murphy, vice president of Murphy Brothers Contracting. “We will be able to purchase better lighting, upgrade the landscaping, improve the look of the customer service area and make Mamaroneck Self-Storage more attractive to our prospective customers and to those who live and work in the area."

11/19/14 – Murphy Brothers Contracting was awarded a $110,625 sales-tax exemption on its Mamaroneck Self-Storage project by the Westchester Industrial Development Agency (IDA). The decision was part of $1.9 million in tax exemptions given to four development projects in Westchester County, N.Y., that the IDA said would yield $71.5 million in private investment, according to the source.

The 40,000-square-foot Mamaroneck Self-Storage development, expected to be completed in May, will incorporate green-building technologies including solar shingles, heat-recovery ventilators, a high-efficiency variable refrigerant flow cooling and heating system, and energy-efficient windows.

The $3.5 million project is expected to create 200 construction jobs, the source reported. The four projects combined will create more than 750 permanent and full-time jobs, according to the IDA.

11/14/14 – Real estate developers Chris and Sean Murphy of Murphy Brothers Contracting are seeking a $110,625 sales-tax break on their $3 million Mamaroneck Self-Storage project. The request is among $2.4 million in tax breaks being sought by businesses in Westchester County, N.Y. The Westchester Industrial Development Agency was expected to vote on the applications on Thursday.

The Mamaroneck Self-Storage development, expected to be completed in May, incorporates “green” construction standards including DOW Powerhouse Solar Shingles, a combination of roof shingles and a solar-panel system.

Other tax-break applicants include Ritz-Carlton, which is seeking a $297,500 sales-tax exemption on a $4 million hotel renovation, and Gateway Kensington, which has requested a $1.87 million sales- and mortgage-recording tax break on a $60 million condominium development in Bronxville, N.Y.

The $3 million facility, predicted to open in May, will incorporate “green” construction standards, according to the source. The Murphys spent five years planning the project, working with the New York State Energy Research and Development Authority as well as Steven Winter Associates Inc., a research, design and consulting firm for high-performance buildings, to ensure it included features such as DOW Powerhouse Solar Shingles, Sean Murphy told the source. Murphy Brothers is an authorized dealer/installer of the product, which is a combination of roof shingles and a solar-panel system.

Plunkett proclaimed the day “Murphy Brothers Contracting Recognition Day in Westchester County” on behalf of Rob Astorino, county executive. He lauded the company as “an economic engine, committed to Westchester, giving back to the community.”