David Ledoux and Rick Stockton were looking for passive income streams in 2015 when they decided to purchase a self-storage facility in Houston. After failing to agree on a price with the seller, they brainstormed alternative methods to break into the industry. Little did they know their disappointment would inspire them to build a new breed of eco-friendly facilities.

Their idea was to incorporate stacked shipping containers to create a multi-story structure. They stopped at their favorite watering hole and created a napkin sketch of what this type of facility might look like.

At the time, the pair worked at a Houston-based engineering, procurement and construction firm, which specialized in building and installing modular petroleum refineries worldwide. Over the next year, they spent their spare time working on their design. They also established relationships with contractors, engineers and, specifically, Stephen L. Levine, an intellectual-property attorney with the firm Carrington, Coleman, Sloman & Blumenthal LLP, to verify, expand and improve their initial concept.

“Steve has been instrumental in guiding us through the patent process, which was a real learning process for both Rick and me,” Ledoux says.

“It appears that self-storage intellectual property has been fairly static if not undeveloped, whereas the excitement and significant changes surrounding Rick and David’s innovations has translated into a long-term legal strategy that has them filing multiple patent applications, domestically and internationally,” Levine says. “This has allowed them to further secure and commercialize their rights in what could well constitute a pioneering transition and position in the self-storage industry.”

It wasn’t long before they left their day jobs and founded GreenSpace Holdings.

Ledoux and Stockton soon met with Fairway America, an advisory, consulting and investment firm specializing in non-institutionalized real estate assets. After several months vetting the GreenSpace concept, the company decided to sponsor the first facility to be developed using the proprietary design, in Pearland, Texas.

It was at about this time the partners discovered finance firm Jernigan Capital. They not only liked its program, they visited its headquarters in Memphis, Tenn. “Jernigan Capital liked what we were doing and embraced our designs,” Stockton says. “It was clear to them that we had spent a lot of time developing numerous aspects and implementation innovations of the concepts. We visited Jernigan several times before committing to a project together, and they have been fantastic partners.”

Because the designs involved new construction techniques, finding a builder to sign their non-disclosure agreement (NDA) was difficult. However, they discovered a collaborator in design-build firm TMS Contractors LLC, which works right in their same office building. TMS Vice President David Cannaliato signed the agreement, and a new alliance was forged.

“Working with TMS President Stefan Knieling and David has been nothing short of a dream,” Stockton says. “They worked with us tirelessly for almost a year before we closed our first project finance. They are true partners.”

Once GreenSpace and TMS began collaborating on the first project, their creativity was turbo-charged. The companies spent hundreds of hours converting innovative ideas into engineered drawings that would be ready for permitting and further augment the growing intellectual-property portfolio.

Certain aspects of GreenSpace inventions have been vetted by industry moguls, the banking industry, civil and structural engineers, and investors. The benefits Ledoux and Stockton discovered from their patents-pending ideas convinced these groups to invest and finance their projects.

Self-storage projects incorporating GreenSpace innovations enjoy many benefits over traditionally built multi-story facilities. One core aspect of the design is it allows the structural integrity of lower containers to support upper floors, providing substantial cost savings. Other advantages include:

The three-story facility under construction in Pearland will comprise 96,000 net rentable square feet of storage space in 1,017 units. Located off a main thoroughfare in one of Houston’s fastest-growing suburbs, the facility will be near a mix of retailers including Lowe’s Home Improvement and an H-E-B grocery store.

GreenSpace is also building a 133,000-net-rentable-square-foot facility in Houston’s energy corridor, just north of an affluent neighborhood, at Interstate 10 W. and the Sam Houston Tollway. Both projects are expected to be completed this year. They’ll be managed by self-storage real estate investment trust CubeSmart and branded under its name. 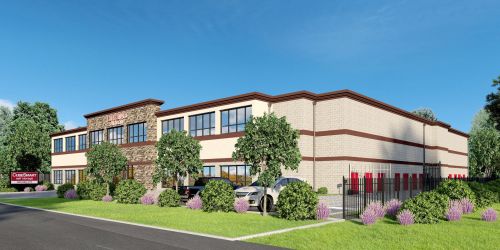 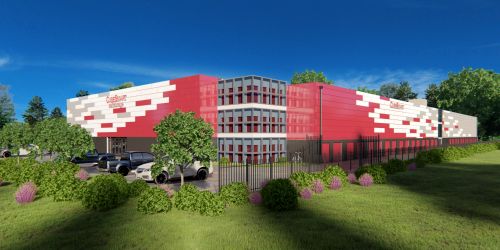 Since news about their designs and projects has been published, Ledoux and Stockton have been contacted by self-storage developers, public real estate investment trusts, real estate funds and high-net worth families looking to build single facilities or as many as 10. They’re also in discussion with a potential financial partner.

Their plan? To license their know-how and technology to other developers, build as many facilities as they can for themselves, and “have as much fun as possible,” Ledoux says. The company hopes to build 50 multi-story self-storage facilities nationwide in the next seven years. All in all, it’s not a bad beginning for a concept that started on a napkin.