“Lately, people are doing whatever they can to avoid having a big, plain-Jane, grey building,” said Ed McKean, owner of Burlington, N.C.-based EKM Construction Inc., which installed the IMPs. “Staggering the colors in a random pattern is one way of doing just that. That seems to be a new trend. It’s not hard, but you have to pay attention when you’re installing the panels.”

The property will operate on electricity produced by the solar-panel system, according to a press release from McElroy Metal, which supplied the IMPs. The climate-controlled building includes 59,000 square feet of 24-gauge, 4-inch IMPs, while the traditional, single-story building was fitted with 10,000 square feet of 2-inch IMPs. 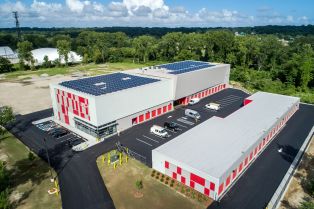 The Path to Sustainability: Designing Self-Storage to Be Eco-Friendly and Achieve Green Certification
Jun 19, 2021
Self-Storage Operator U-Haul Recognized as Gold-Level Sponsor by Tree Canada
May 21, 2021