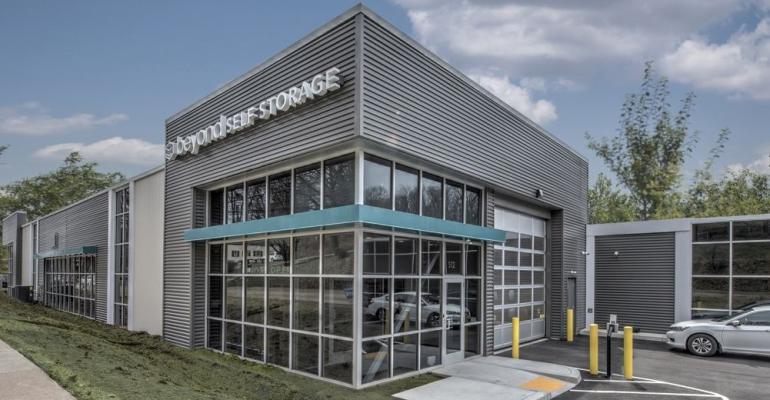 Determined to make the best of a challenging development site in a Pittsburgh suburb, NorthPoint Development experimented with design on its new Beyond Self Storage facility. New processes emerged and lessons were learned.

When Northpoint Development sought to build a new Beyond Self Storage (BSS) facility on a premium yet physically challenging parcel in Mt. Lebanon, Pa., an affluent, hilly suburb of Pittsburgh, it had to create an economical, creative design solution to make it work. The land was notoriously vacant. No developer wanted to touch it due to its many drawbacks.

“We first looked at the property in October 2016 and loved the location, but immediately realized the development hurdles of the site—the steep grade, the irregular shape, and the proximity to a creek and a rail line,” says JJ Jenkins, project manager.

The site sits within the Castle Shannon Boulevard commercial corridor and is easily visible and accessible by heavily trafficked Mt. Lebanon Boulevard. However, while Northpoint aims to build facilities of 105,000 to 145,000 square feet, this site measured only 1.62 acres (a little over 70,000 square feet). With approximately 40 feet from the road to the back of the site, maximizing square footage would be key. Never giving in to a challenge, the company was determined to find success.

While the Northpoint sourcing team was quietly plugging away at site selection in various markets, the company saw the need to create an in-house team of architects to support its efforts. It formed studioNorth Architecture in 2015 to generate site plans, building layouts and renderings for all its projects. Having an in-house team allowed Northpoint to expedite the Mt. Lebanon project and troubleshoot the awkward parcel. 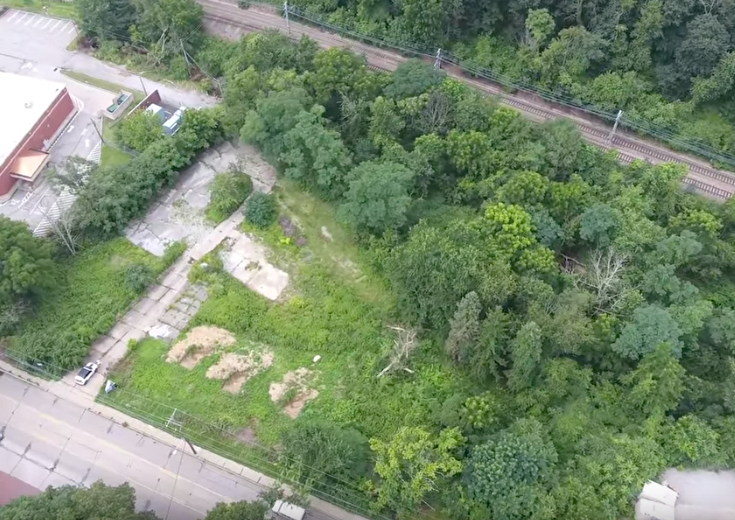 An aerial view of the 1.62-acre lot before construction

“We reviewed many schemes that involved accessing the site down an entrance to the lower elevation, but this left very little area for the building,” says Tim Holliday, project manager. “By examining the code, which allowed multiple lower levels, studioNorth was able to recommend a four-level structure, giving us the square footage we needed to make the land work.”

With the space problem resolved, the team moved on to address the next hurdle. Future customers would need to access the building and drive aisle from one of two points on the site, and neither appeared ideal. “The next step was figuring out how to lay the building out to allow for the multi-level structure, but also allow easy access from the road without any elevation drop,” Holliday says.

Initial designs featured a never-before-attempted elevated drive aisle on a concrete deck supported by concrete piles. However, once the construction team was assembled and ready to go, Holliday and his team reconsidered. “We asked, ‘Is this the right design? Are we missing something? Should we re-evaluate our options?’ That turned out to be a great decision, and a week later, we had scrapped the initial design and re-examined the retaining-wall option,” he says.

studioNorth approached the design by essentially flipping a typical multi-story structure upside down. “A lot of the design considerations took this into account, including the front façade, egress paths, elevator design, office and storage-space relationships, how an end user would orient [himself] within the building, vehicular traffic, and the overall presentation to the user,” says project architect Kevin Polit.

Though it was a departure from previous BSS projects, Northpoint made careful design choices to attract interest and make the building “belong” in the neighborhood. These included a jewel-toned minimalist teal awning—now a signature element for BSS builds—a tinted-glass storefront, and various façade textures with multiple roof lines. 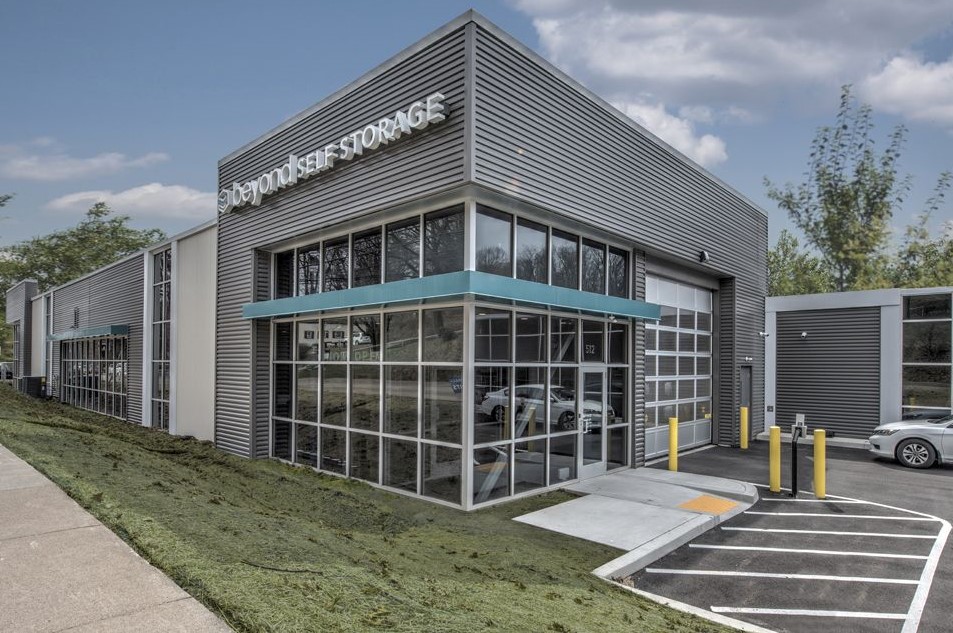 After many layout revisions and months of working through design hurdles, the project received entitlement and permit approvals. The official groundbreaking took place in September 2017, and three months later, the team pushed forward with construction, partnering with AI. Neyer LLC as the general contractor.

Now it was time to put the retaining-wall plan into action. By erecting a vertical, wood-lag wall that separates the multi-level storage building from the drive aisle at the street level, the team was able to push most of the building to the back of the site while allowing the office, drive aisle and parking areas to remain at ground level. The 30-foot-high wall is reinforced with tie-backs and concrete planks.

“In addition, the perimeter wall of our building and the retaining wall were also redesigned to be precast to give us more structural stability and waterproofing. Amazingly, this design turned out to be more economical than our original plan, and was a simple design and structure,” Holliday says. This build modification ended up being a win-win.

Had NorthPoint not pushed the envelope with a team that was ready and willing to find solutions, the Mt. Lebanon project might not have come to fruition. But with a core value of “Take ownership of every situation,” the company and its partners commonly focus on lessons learned, encouraging employees to actively examine and reflect upon teaching moments.

“The biggest lesson learned from the design-construction stage [of this project] would be to keep asking questions and challenge your assumptions,” Holliday says. “Additionally, when budgeting complicated designs and projects, add some room in the schedule to deal with those complications.”

After a year of construction, BSS opened in January. The climate-controlled facility offers 824 units, a meeting room and drive-through loading. It has controlled access and security cameras, and a retail store that sells moving and packing supplies. Customers and even curious residents often stop in to chat with staff and tour the “underground” storage area. This is what BSS is all about—being a partner and resource for the communities it serves.

Nicholle McKenzie is a marketing manager for Northpoint Development, which operates 11 Beyond Self Storage facilities and has 18 more under development or contract. She assists with content creation in addition to new project openings, paid advertising campaigns and marketing outreach. For more information, call 866.955.5761; visit www.beyondselfstorage.com.

Thirsty for More Profit? Advice for Designing Wine Storage as Part of Your Self-Storage Facility
Jan 21, 2022