Locks Hold Their Own in the World of Self-Storage Security: Crime-Stopping and Marketing Power

Self-storage locks with construction and keyway mechanisms provide as much protection and deterrent as other high-tech security items. But for many operators dazzled by the latest technology, locks are just an afterthought. Instead, the lock, particularly a high-security one, should be at the front and center of every facilitys marketing program.

Self-storage locks with construction and keyway mechanisms provide as much protection and deterrent as other high-tech security items. But for many operators dazzled by the latest technology, locks are just an afterthought. Instead, the lock, particularly a high-security one, should be at the front and center of every facilitys marketing program.

Bill Green has used high-security cylinder locks for more than 10 years at Double J Court Self-Storage in Wickenburg, Ariz. He capitalizes on this in his marketing program. When prospects call, Green and his managers discuss the features of the facility by noting their security first, Let me tell you about our lock system

Double J Courts lock system is the only flush-mount deadbolt-cylinder system in the facilitys market. Green and his team have built their sales message around the locking system, noting its drill- and pick-resistant keyway and unique registered, non-duplicatable key.

Green doesnt emphasize gates or alarms or cameras in his presentation. I tell them we stop thieves at the door. Cameras record crime. This lock stops crime, he says. The lock mechanism is built around 11 rotating disks and a unique key with more than three million usable key combinations. The system was invented early in the last century and continues to prove itself in industries such as trucking, vending and gaming.

Because theres no fast, safe way to bypass the lock, the system Green uses is master-keyed. With three million usable key combinations, Green knows only his master key and the customers registered key can operate the lock. Customers acknowledge the presence of a master key in the lease, and naturally its stored offsite under management control.

In some areas, safety may be a reason to restrict after-hours facility access, but the cylinder system sets a high level of security at the door that works against the odds of potential thieves. Green allows 24-hour access to his site. With the doors secure, we can let them come and go.

During his years in Wickenburg, a resort area in North Arizona, Green has met resistance to a high-security master-key system only once or twice, but then hes also had opposition regarding copying IDs or asking for pictures of renters. If theyre hesitant, maybe theyre not the kind of customers we want, he says.

Security Under the Freeway

Sometimes necessity can create an advantage. Because Hollywood Self-Storage is located under and adjacent to one of Californias many freeways, the local fire marshal required the owners to install a master-key system to provide fast, easy access in any type of emergency or threat situation. Co-managers Roberta and David Colburn have turned this necessity to their advantage.

David, who managed apartment buildings before this facility, builds his marketing around the lock. When I explain how the lock works and the security benefits, our new customers are pleased. Weve never lost one because of the lock, and weve never had a break-in, he says.

Hollywood Self-Storage uses disk locks and padlocks with a hardened steel shackle rather than a cylinder lock. The virtually pick- and drill-proof keyway provides nearly the same level of security as the cylinder lock without requiring new latches. Used in a cylinder-lock system or with padlocks, high-security locks are not passive technology on display, but tools that provide the final barrier against a thief while creating a marketing advantage.

Consider your investment in high-tech security equipment. Without a barrier at the door, access-control systems such as cameras and door alarms can still be compromised. Cameras reassure prospects and customers and deter thieves, but they only record crime, not prevent it. Door alarms announce crime after the fact. Even with a tough padlock or disk lock, a self-storage slide bolt can be cut with a bolt-cutter. Only a cylinder lock stops crime at the door.

As high-tech security becomes more practical and cost-effective, hardware in the form of high-security locks, particularly cylinder locks, is even more important to balance and complement a facility security program. Security is only as strong as its weakest link. No matter how sophisticated, electronic security needs a backstop. Settling on a $5 backstop for a security system is short-sighted and dangerous.

Both a medium- and a high-security flush-mount cylinder-lock system provides a security level that complements costlier components such as access control, cameras and door alarms. Because the lock inserts into the door, bolt-cutters are useless. 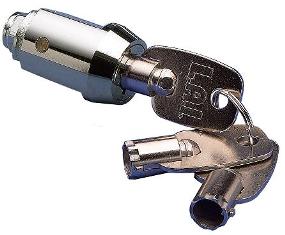 A tubular-cylinder lock uses a circular six or seven pin-tumbler mechanism and a round tubular key. With enough key combinations (typically from 20,000 to 60,000) and quality manufacturing, the lock is much more difficult to pick or drill than a padlock or a disk lock with a standard flat key. Although there are battery-operated tools on the Internet that can supposedly pick a tubular lock, most of these tools are used on vending machines, which guarantee a payoff.

In addition, a drill with diamond tip can drill out the mechanism, but because drilling takes time and makes noise, its rarely practical for a thief to drill out a cylinder lock. Some manufacturers offer these locks with numbered keys, permitting an owner to order a replacement key from the manufacturer to open an abandoned or delinquent unit without having a key on the premises.

A high-security cylinder lock goes beyond the tubular mechanism and is based on a series of rotating detainer disks. The detainer-disk system has more than three million usable key combinations, and unlike the tubular type, there are no mechanized picking tools available on the Internet. Because of its hardened steel front and a steel internal disk, the detainer disk lock is also virtually drill-proof. This is the type of lock used at Double J Court, Hollywood Self-Storage and other high-security facilities around the country.

Dont be dazzled by technology. A break-in must eventually be stopped at the door. High-security cylinder locks, disk locks or padlocks will complement the technology-based elements of your security system. High-security locks are a one-time expense. Most operators lease them for free or charge a $5 or $10 administrative fee and deposit to their tenants, keeping the deposit if the renter doesnt return the key. The lock usually pays for itself after two or three turnovers. At a relatively low cost, high-security locks provide active hardware security and a visible tangible market advantage in competitive markets.

After assessing electronic security for your facility, dont neglect to take a look at the high-security lock options offered by your lock manufacturer. Ask for a lock with more than 50,000 usable key combinations or, preferably, more than a million, built around a keyway that cannot be compromised by Internet-available picking tools or a 48-inch bolt-cutter. For a small incremental cost, you can move ahead of your competitors, attract security-conscious customers and keep your facility out of the headlines.

Rich Morahan frequently writes articles and conducts seminars on security for a number of industries. To reach him, call 617.240.0372; e-mail rmwrite@comcast.net ; visit www.rmorahan.com.