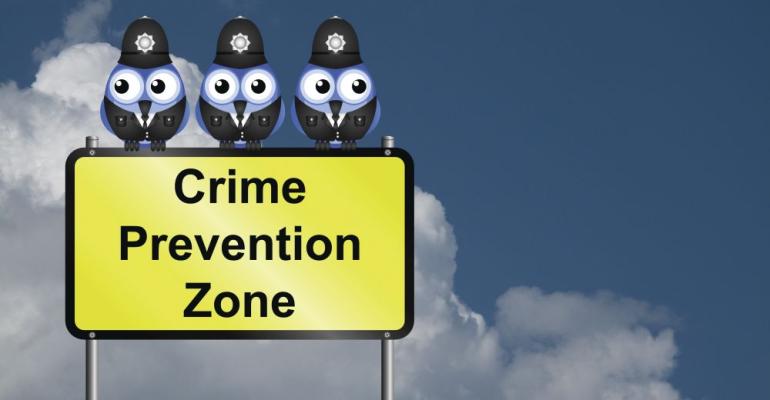 Crime is rising across the nation in response to conditions created by the coronavirus pandemic. As a self-storage operator, you should be looking for ways to increase the fortification of your facility and avoid bad customer behavior. Here’s some advice to help you be proactive.

Most self-storage facilities have gone years without a single break-in, but lately, the industry is seeing a rise in crime almost everywhere. Historically, when a break-in occurred, it was often a tenant trying to get to their stuff after being locked out for non-payment. Other times it was a disgruntled former partner or family member trying to retrieve their belongings from the person “holding it hostage” inside their unit. In a few instances, we found people stealing from their elderly parents or grandparents.

The crime we see at our facilities today, though, isn’t just cutting locks and opening a few doors to have a look around. Instead, criminals pry into doors with wrecking bars, break into offices, force open electrical boxes, steal backflow devices, break into stored vehicles, steal catalytic converters, tag walls with graffiti, sabotage lighting, damage surveillance cameras and cause real property damage.

Self-storage isn’t the only victim, either. If you’ve been watching the news, you know crime has become a hot topic on a national level. Violence has been surging almost everywhere, with homicide rates spiking nearly 30% in 2020, the largest one-year increase since 1960. Shoplifting now occurs in broad daylight in front of security staff. We’ve seen looting, gang-related crimes and unprovoked attacks on the rise, including on trains and in restaurants. Drug addiction and mental-health issues are also increasing.

All of this is intertwined with the pandemic, social unrest, and debates about policing and the criminal-justice system. Legislative measures have been enacted to combat police misconduct, eliminate cash bail for those who can’t afford it, decriminalize most non-violent crimes to misdemeanors, and try to tackle other flash-button issues. At the same time, some officials aren’t enforcing laws with which they disagree, including not prosecuting suspects of non-violent and low-level crimes.

As a result, police departments have become short-staffed, overworked and generally unavailable to pursue most petty crimes. Response times can be days and weeks, if at all. For a self-storage operation, making a police report doesn’t necessarily start an official investigation. Instead, it’s become just a number to give to the insurance company.

At my company, we recently caught a thief red-handed. We knew who the person was and had them on camera. We expected the police to go straight to the suspect’s house to make an arrest, but they didn’t. As a non-violent theft committed on a non-residential property, the crime is considered a misdemeanor. Any arrest would result in an immediate release. When there’s no prosecution, the arrest is apparently pointless. We were told, “Unless we catch these thieves with drugs, the burglary charge won’t stick or amount to much.”

Unfortunately for self-storage operators, when crime goes unchecked without repercussion or accountability, it becomes more rampant. Criminals feel emboldened, and we feel powerless to do anything about it. But don’t be discouraged. There are things you can do to be proactive, fortify your facility and deter bad behavior.

To help combat disturbing trends in crime, here are some tactics my company has found helpful at our self-storage facilities:

Eliminate all types of loitering. The more you allow customers to hang out, the more problems you’ll have. Other than initial move-in or final move-out, we limit the time customers are allowed to be on site. Don’t let customers run their business or work from the property. Don’t allow man caves or band practices. Don’t allow them to snooze in their unit. If you can keep customers to a quick drop-off or pick-up of items, you’ll have fewer people loitering about and getting into trouble.

Jettison problematic tenants. Most of our problems stem from just a few people, so get rid of those who cause trouble. Life is too short to hand out a bunch of warnings. We have a zero-tolerance policy for those break the rules. For example, you don’t have to put up with people who tailgate onto the property, loiter, violate access hours, sleep or defecate on site, yell at staff or break into their own units when overlocked.

Make repairs quickly. If your property gets tagged with graffiti, paint over it immediately. When fencing gets cut, have it repaired the same day. When gates or keypads fail, get them fixed quickly. When lights burn out, replace them. When cameras give out, upgrade them. Many properties have some deferred items that need repair. Make maintaining your property and its security systems a priority.

Improve lighting. A well-lit facility can deter a lot of crime. Make sure all your lights are working, then add more fixtures. Look for ways to add more lumens and brightness. Eliminate dark places.

Reduce access. Very few customers, if any, really need 24-hour access. Before you grant anytime access, ask the customer why they would need to be in their unit at 2 a.m. Nothing good happens at that time of night.

Invest in modern technology. The latest tools can help keep a property secure. For example, every owner should realize that good-quality cameras and digital video recorders help staff keep tabs on site activity. Just bear in mind that these and other components, such as individual unit alarms, motion-sensor lighting, laser perimeter detection and 24-hour security monitoring, all cost money and require updates. Invest in good systems and then spend the money needed to keep them operational.

Encourage tenants to use disc locks. Let’s face it: The traditional padlock is easy to cut. Disc locks are notably harder to compromise. Unfortunately, thieves will often resort to prying and breaking the door latch, which can necessitate its replacement or perhaps an even more expensive door repair. Regardless, a disc lock makes the criminal’s job much more difficult and can deter a would-be thief.

Work with law enforcement. Whenever possible, do your best to build a real relationship with local law enforcement. Cooperate. Officers at all levels needs to be funded, supported, protected and empowered if we’re to be successful.

Following these strategies won’t prevent every crime, but they can go a long way toward promoting good behavior from your self-storage customers and deterring people with ill intent.

Brad Lund is CEO and founder of Purely Storage, which operates 31 self-storage facilities in Arizona, California, Texas and Washington. After serving as a self-storage broker, he decided to pursue his own investments. With expertise in real estate, asset management, investments and business development, he built the operation from the ground up. He’s also a licensed pilot, married with five kids. Connect with him at https://www.linkedin.com/in/bradlundstorage.