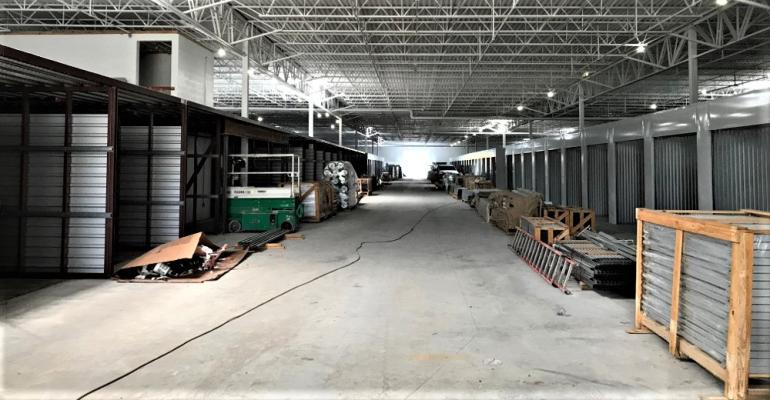 If you’re interested in developing self-storage, a conversion offers many advantages. To better understand the process behind such a project, let’s look at one that’s already underway by Comfort Storage LLC in Punta Gorda, Fla.

The self-storage industry is having a moment. Facility development is booming; and while there are many factors to this, there are two major forces in play: Occupancy levels are at an all-time high, and the market is ripe with conversion opportunities.

What exactly is a conversion? Basically, it’s the process of turning an existing building into a fully functional storage facility. The opportunities for additions or even remixes are almost endless on these pre-existing structures. You may even be able to extend your rental capabilities with outdoor storage and relocatable units.

There are many advantages to pursuing a conversion project. First, it can be less expensive to acquire an existing property than to pursue ground-up construction. There can be fewer city and local ordinance permits required. It can also mean an expedited time frame from purchase to opening date, as the structural framework is already in place.

Building a Legacy, Seizing a Moment

Lance Stockhausen isn’t new to the construction business. His family’s experience can be traced back five generations, beginning in Germany. At a young age, Stockhausen and his brother were already building houses alongside their grandparents and turning them into rental properties. In 1989, he shifted his focus toward a new market: self-storage.

“We’ve always loved storage units over apartments,” Stockhausen says. The legalities and some of the other “drama” involved with wayward house renters (and subsequent evictions) proved to be too great of a headache, which led the brothers to explore other options. They erected their first storage facility in Wisconsin, consisting of three exterior buildings with a total of 150 units. They never turned back!

Fast forward to 2018, and Stockhausen’s team is nearing completion on its Punta Gorda conversion project. Formerly a Walmart, the building was first turned into a classic-car museum that housed more than 200 rare, collectible vehicles. When the owner moved to a new location, the Stockhausen brothers saw the opportunity to convert the space, which had an appealing size and shape, into a state-of-the-art self-storage property.

From Plan to Action

Once the purchased was finalized, they got to work on the blueprints and the project began to take shape. The position of the girders provided enough height that they could add a second-level mezzanine to maximize revenue. This allowed them to “build up” rather than out, creating an additional floor on top of the original structure.

Skylights were added where old air-conditioning units were removed, providing more natural light. Rather than closing in the mezzanine, a railing will be used off the elevator and stairwell. This will give the area a more open feel and add safety for customers.

Outside, the Walmart operators had begun (but never completed) an expansion that included posts and an overhang. Stockhausen’s crew saw the chance to use this structure as the groundwork for a boat/RV-storage shelter, creating an additional revenue source without investing a boatload of time and energy.

A strip of land between the building and retention pond was perfect for RV parking—if the pond could be reshaped. The city also required a screen wall to block any exterior stored property. The brothers worked with engineers to find a solution. They not only redesigned the pond, they chose a 16-foot concrete wall, which would be more visually appealing and cost-effective than block, and take less time to install.

The facility design also includes a drive-through that allows tenants to drive their vehicles into the facility for loading/unloading and stay protected from rain, sun, humidity, wind and bugs. Not only can they skip the awkward umbrella juggle, their items will be saved from any undue damage.

Lessons Learned and Advice to Give

With an expected open date of Sept. 1 and a soft opening planned for mid-August, Stockhausen and his crew are working seven days a week to ensure all elements of the conversion proceed smoothly. This schedule isn’t driven by panic or desperation, but by Stockhausen’s longstanding work ethic. “Every project we’ve ever done, we see it through to the end,” he says.

Having the owner act as the general contractor proved to be beneficial in planning and building. The Stockhausens have an innate ability to visualize what can be accomplished with a physical structure and the surrounding land. Being on site daily allowed them to make design decisions and changes as the project progressed.

Fortunately, the Comfort Storage team didn’t encounter any significant problems during the development process … well, except for the removal of a 7-foot alligator from behind the property. He was affectionately named “Chevy” and left without much of a fight.

“It’s all about having an open mind when you’re in this business,” Stockhausen says. “Know that you’re going to run into problems—that’s just construction! But the important element is to not have your blinders on. Be ready to come up with a different solution or go in a different direction than you originally planned so you can get the best outcome for your project.”

Stockhausen also notes the truth of the popular real estate mantra “location, location, location” when buying a property for conversion. “If you can find an old Walmart, Kmart building, a Target, you can already know that they’re in great locations. That’s the way to go!” Luckily for anyone looking to do his own project, the market is ripe with vacant big-box retail stores, Stockhausen says. If you’ve ever considered a self-storage conversion, there’s no time like the present!

Sponsored Content
Maintain Your Self-Storage Facility Easier Than Ever With the New Janus Facilitate Division
Jun 21, 2021