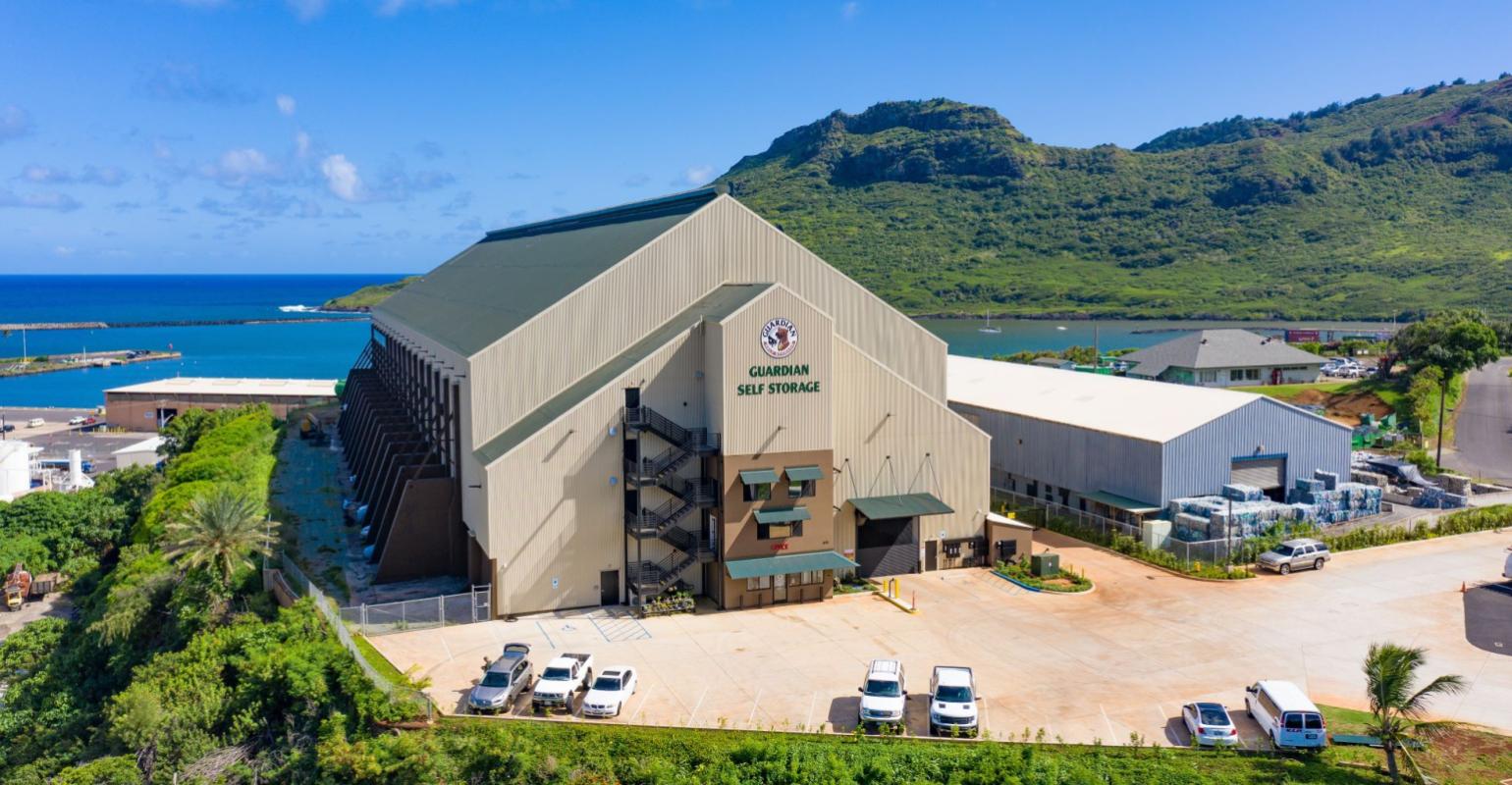 When the owners of Guardian Self Storage decided to open a second site in Lihue, Hawaii, they chose a defunct sugar-storage warehouse to convert. Read what they did, challenges they faced and more.

When most people think about self-storage conversions, they imagine a vacant grocery store, empty strip mall or even an office building. Few would eye a defunct sugar warehouse and say, “That’s the one.” Yet that’s exactly what Thomas Lambert thought when he spotted the former Nāwiliwili Bulk Sugar Facility on Niumalu Road in Lihue, the capital of Kauai, Hawaii.

Guardian Self Storage snapped up the 3.5-acre property for $3 million in 2016. The site included a 55,000-square-foot structure once used for bulk sugar storage and an adjacent weigh station.

“We liked the central location, the prominence, size and historical nature. It is a well-built building with one-foot-wide concrete walls and large I-beam construction in the upper walls. There was no internal framing, so it was an empty canvas to work with,” says Lambert, co-founder, who opened the first Guardian location in Lihue in 2006.

Sugar-cane production has been large part of Lihue’s history. The Nāwiliwili warehouse functioned as the only export facility for sugar-cane enterprises from 1950 to 2010. Sugar from the 24,000-ton-capacity warehouse could be moved to a ship at a rate of between 600 to 700 tons per hour. The building even held sugar until Guardian’s acquisition.

Built in 1949 at a cost of $1 million, the historic site became vacant in 2010 after sugar-cane producer Gay & Robinson Inc. ceased operation. Although the building was in disrepair, its foundation was solid, making it ideal for renovation. 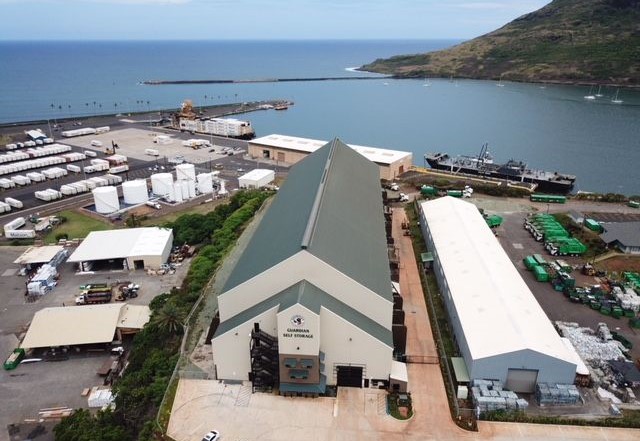 “This building—the old bulk-sugar building—is one of the bigger buildings and prominently displayed, overlooking the harbor and a visual marker for approaching planes to the island,” Lambert says.

Kauai is a rural, less developed island with fewer development projects. Although the current zoning ordinance restricts the height of new buildings, the warehouse received grandfather status, allowing Lambert to maximize the buildable space. While some suggested it would be more cost-effective to tear down the building and start new, Lambert knew the current zoning wouldn’t allow for such a domineering structure.

“Additionally, the cost of demolition would be exorbitant because each buttress is reinforced with large and numerous rebars and has deep, extensive footings, and there would be a lot of waste to haul away,” Lambert says. “Management of that would be difficult because our island land fill is beyond original capacity, and restrictions on quantity of waste to be dumped are imposed, requiring shipment of waste off island in some circumstances. I believe that may have been one of the dilemmas for the prior owners.”

During the renovation, much of the structure’s former attributes were left intact, such as catwalks at the top of the interior. The renovation included painting the structure as well as stripping and replacing the siding. Despite hours of power-washing, unfinished sections of the building still show dark splotches of molasses in the concrete walls.

About one-third of the four-story building was transformed into 60,000 square feet of storage during phase one. The second and third phases will extend the self-storage horizontally, add two more elevators and extend all the floors.

In addition to self-storage, micro-apartments are being explored for further phases. “Because there is a housing shortage on Kauai, we are exploring different options of development of micro-housing on portions of the undeveloped land and building industrial-style lofts for work and home,” Lambert says. “We are looking to incorporate these additions with Hawaii plantation-style architecture.”

The Guardian conversion wasn’t without its share of challenges. One of the biggest obstacles was securing subcontractors. “Because Kauai has a small work force, it was difficult finding an architect and engineers who knew what needed to be done. Additionally, contractors were busy, expensive and not familiar with the product development,” Lambert says. “We had to find professionals off-island and in the mainland to help with design plans, and we needed to hire crews from the mainland to supplement the local contractors hired.” 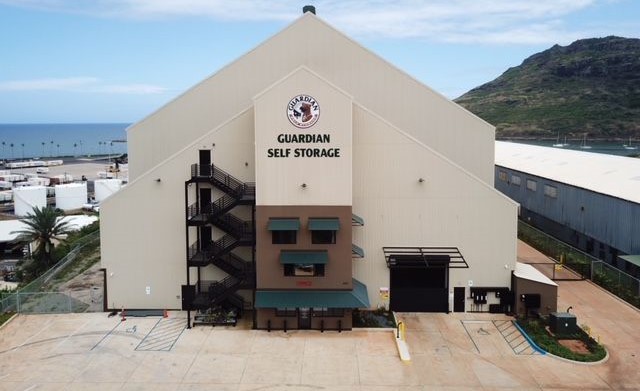 The project was designed by architect Ken Carrell, owner of ARE Associates, and completed by general contractor Curtis Law Inc. The metal supplier was Kiwi II Construction Inc., with the doors and hallway systems provided by Janus International.

Another trial was outfitting the property with common utilities such as Internet and phone service. Even though the site is within the main town, the local cable company didn’t have infrastructure on Niumalu Road and was unable to provide a phone line even though there had been one in the past. “That came as a surprise, especially due to the fact that both utility companies approved our construction plans, which showed service to our property, and we did not find this out until the end of construction,” Lambert says.

A wireless alternative was discovered for the office Internet and phone communication as well as the emergency fire-alarm system, security system and the emergency call for the elevators. “Luckily, the technology was there, but the local inspectors were not familiar with some of these technologies and we had to provide documentation that they were viable alternatives,” Lambert added.

Although happy with the project and its progress, Lambert wishes he had made a few changes to the design. At the top the list is tearing down the weigh station at the front of the site and developing a ground-up storage building. He also would’ve deferred improvement of the bulk-sugar building until the cash flow could better support this endeavor.

“We spent a lot of money up front, which will help in the long run; but it was too capital-intensive at the front end. Our site work had to go deeper into the property by doing what we did. If developed in front only, that would’ve saved us from developing the master site work on the front end,” Lambert says. “Additionally, we essentially built a building inside the old building, and still had to improve the shell of the old building, which costs us more money initially than starting from scratch on a smaller building.”

The company was able to save money on some items such as incorporating the new building footings into the existing ones. “Some other areas saved us some money, but there were difficulties and unknown costs until construction proceeded,” he adds.

In the end, the community’s positive response to the repurposed site has been worth all the bumps in the journey. “They are complimentary about the transformation of the building and addressing the unattractive qualities it used to have,” Lambert says. “They are impressed with how nice it is. They like the climate-control features. Our competitors have yet incorporated that element. Customers seem to enjoy the use of the building.”