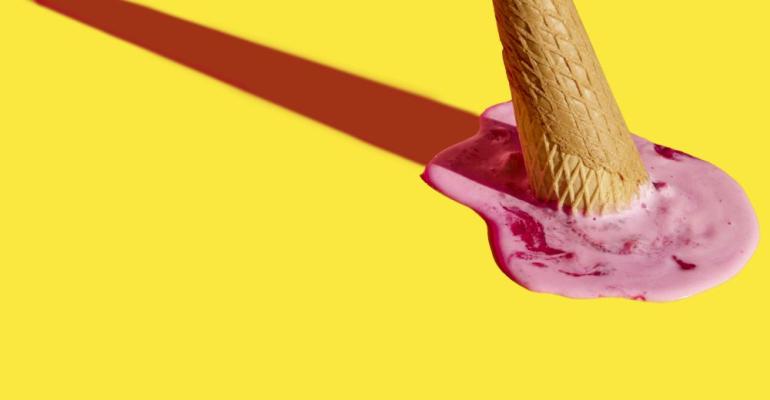 Conversion projects have become a popular way for real estate developers to enter the self-storage market, but they can be wrought with unforeseen challenges. An industry architect chronicles two recent projects that had him battling Murphy’s Law.

Architectural recycling is trending in the self-storage industry and for good reason: It can reduce waste, create value and improve the ambiance of urban and suburban environments, plus it makes economic sense. With the number of suitable building sites shrinking and land costs increasing, owners and developers are smart to consider the retrofit of existing, vacant structures.

The ongoing coronavirus pandemic has only increased the inventory of unoccupied buildings. In addition to a glut of warehouse and industrial structures, the shift from big-box retail to online purchasing has provided new opportunities. However, every rehab of an existing building involves challenges that require unique solutions. These typically surface only after construction has begun.

I recently worked on two such conversion projects. What follows is a case-study overview of those self-storage developments, which did their best to validate the theory of Murphy’s Law, which states, “Anything that can go wrong, will go wrong.”

The now defunct Dubois Textiles Inc. warehouse, office and showroom is on a busy boulevard in an industrial sector of Baltimore. It’s south of downtown and adjacent to a rail line. The site was attractive for self-storage due to its large footprint, adequate parking and location within a half-mile of the entrance and exit ramps to Interstate 95 (I-95). The highway provides a traffic corridor between Baltimore and Washington, D.C., and runs from Florida to Massachusetts.

This 60-year-old complex consisted of a 14-foot high warehouse, a full basement with a ceiling height of 11 feet, and a two-story showroom with an office on the second level. The developer asked for 120,000 gross square feet of usable self-storage space, but after analyzing the property, the contractor and I determined it wouldn’t accommodate our needs. The ceiling wasn’t high enough to add a second level, and the columns weren’t in usable locations.

The solution was to demolish down to the concrete first-floor slab, which then became the roof of the basement level. We proposed creating four floors of self-storage by adding two new levels and using the existing basement. The concrete columns in the basement were spaced at 20 feet. Our engineer designed new footings and added additional columns to create a 10-by-10-foot grid. It would support the floors above and bring the first-floor slab up to a load capability of 125 pounds per square foot.

Water everywhere. The basement was dry when we did borings for the new footings prior to construction, but unexpectedly hit mud when we dug the footings. We noticed two large sump pits several feet below the slab with pumps that contained water. The pumps were no longer operative because the electric supply had been cut, and water began to fill the footings from an unknown source.

We believed there must have been a high water table running under part of the slab. We called in a geotech engineer who suggested we muck out the mud and dig down until we reached dry earth. Even after we poured the footings, water continued to intrude from around the edges of the new concrete. Eventually, it flooded a large part of the basement floor. 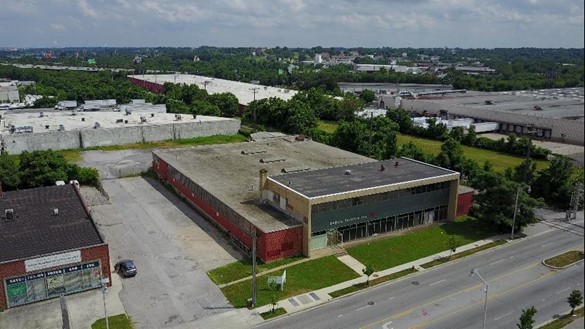 The former textiles warehouse in Baltimore

The engineer then ordered a water test, which came back with the surprising result that it contained chlorine. That made us suspect that the culprit was leaks from the aging urban infrastructure under the main thoroughfare. With the city unresponsive to several requests for assistance, we needed a solution. We decided to install more drains, dig an internal trench and exit the water to an exterior pit using redundant pumps and an emergency generator. We eventually controlled the flooding, and today the basement is dry.

The two additional levels above the first-floor slab were constructed using typical tube steel columns and W8-by-10 beams at 10 feet, with metal decking and 4.5-inch concrete slabs spanning the beams. The exterior walls were built of insulated 3-inch metal panels. However, for the side of the building on the property line, code required the wall to be three-hour rated, necessitating the use of 6-inch-thick, insulated metal panels.

Neighbor problems. Unexpected water wasn’t our only challenge. Though issues with neighbors are common, no one could have anticipated the type of delays and additional expenses we encountered. As I previously mentioned, this property is adjacent to a railroad track. Sporadic traffic on the line consists of slow-moving freight.

The exterior-siding contractor who worked on the wall along the property line put his scaffolding on railroad land, a reasonable distance from the tracks. The rail company objected and issued a complaint. The siding contractor had to halt construction while the general contractor entered negotiations. Bureaucratic paperwork caused a two-week delay. On top of that, the railroad required the general contractor to hire a signalman, who was instructed to stop work on the wall and remove all personnel from the area each time a train needed to pass. The arrangement resulted additional expenses of $17,000.

Artistic rendering of the Baltimore project

No two self-storage conversion projects are alike. Each is unique, and building during the pandemic created unparalleled challenges. Renovation often requires solving problems on the fly, but this project was a poster child for rethinking, redesigning and redoing.

The site comprised several buildings in West Chester, Pennsylvania, which previously served as a food-processing plant. The structures were built over a span of decades beginning in the 1960s. Generally, it was steel construction with concrete slab floors. Taken together, the complex yielded approximately 120,000 square feet of usable space. The plan called for the demolition of an attached two-story brick structure, two silos and small outbuildings.

The exterior walls of the buildings were early versions of 6-inch, insulated metal panels. I used one 40-foot-long, 13-foot-high wall of brick and block as the office sidewall. The metal walls were in poor repair and punctured by several 10-by-12-foot openings. In the interior, the steel columns were structurally sound. The roof didn’t leak, but obsolete piping and HVAC equipment had to be removed and penetrations repaired.

When I was hired, the owner was acting as his own general contractor and had already begun demolition. He needed a set of construction documents to acquire a permit. Unforeseen challenges arose when the Centers for Disease Control and Prevention announced the pandemic and Pennsylvania officials declared a moratorium on all construction. All building activity was suspended for 90 days. Fortunately, I proceeded with the design and unit mix because I had enough information to partially create the construction documents. However, all in-person communication with government officials ceased.

Poor scan. The owner supplied a laser scan of the building interior from a firm out of New York. While the $1,000 price tag was a bargain, the scan didn’t satisfy my requirements or those of the sprinkler subcontractor. A scan with the highest possible resolution yields the best results. When a building is scanned, it should be free of debris, boxes, furniture, etc., and the optimum approach is to scan inside and outside, eliminating all need to field measure. (Exterior scanning shows elevations, wall thickness and irregularities, such as “out of plumb” walls.) 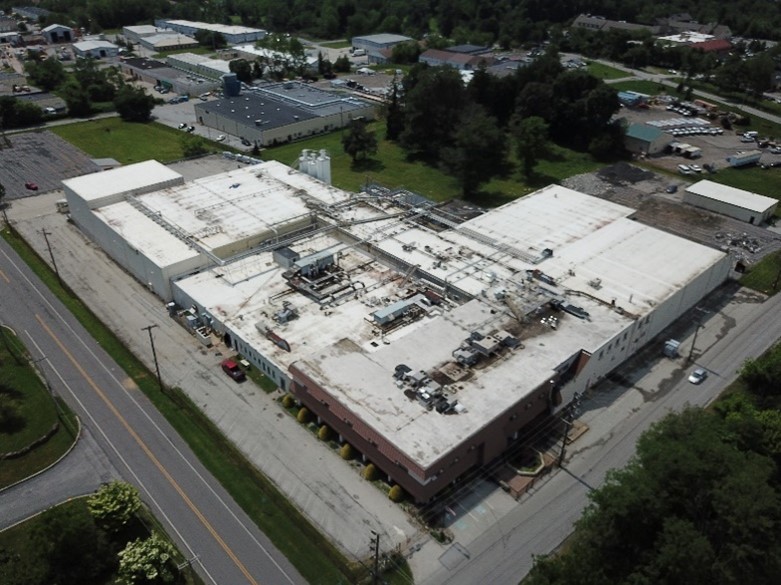 An aerial view of the Pennsylvania plant prior to conversion

I was able to import the scan into my 3D design and modeling software, but the resolution was too low to accurately trace the floor and structure. I had to field measure. I made several 150-mile roundtrips to the jobsite, though all toll booths on I-95 were closed and food was unavailable on the road. To get accurate measurements of the exterior elevations, I had a worker climb the roofs and drop a tape.

While measuring, I found room for two bathrooms and a meeting room in the office. I also established the distances of fire exits to meet code and the requirements for handicap bathrooms, entrances and exits according to the Americans With Disabilities Act. I completed the plans and sent the drawings to the permit office for review by the local inspector/reviewer. Demolition continued during the permit process. 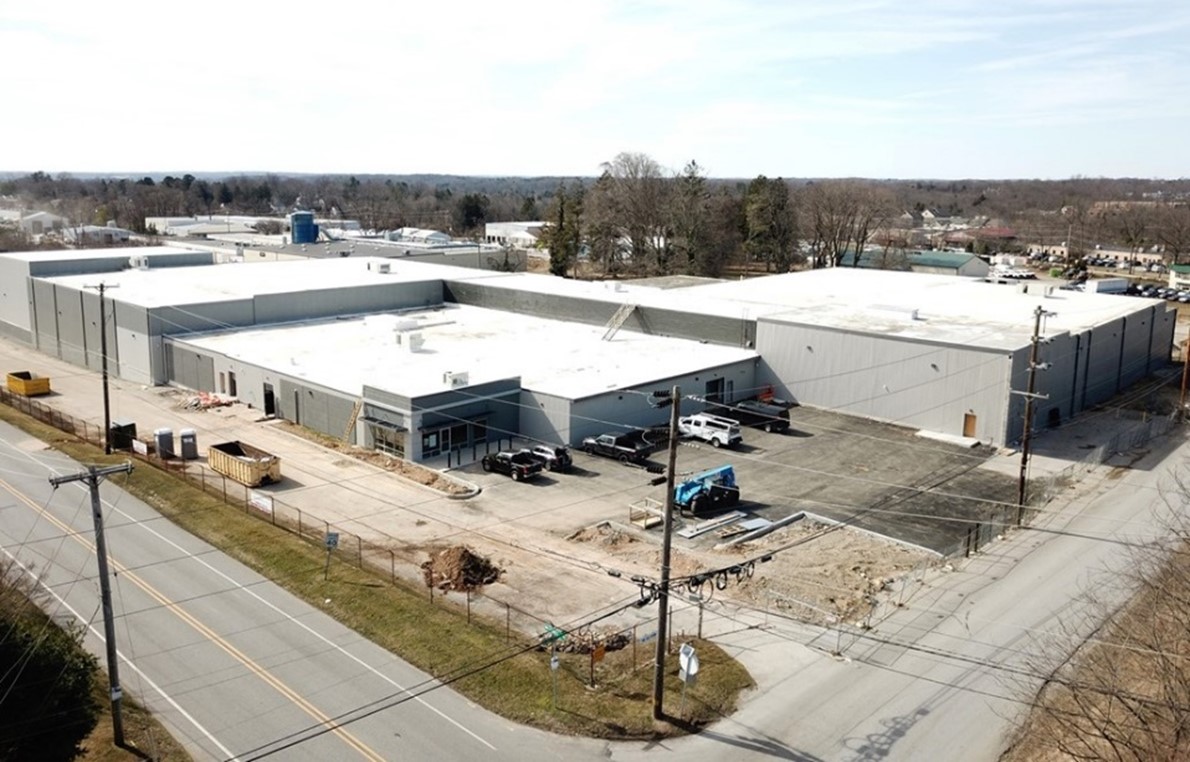 The Pennsylvania complex after repairs

More obstacles. Post-permit and while still conducting demolition, we found exposed steel bracing that was obstructing some proposed self-storage units. It couldn’t be removed because it structurally integral. After many debates, our structural engineer was able to modify the braces, which allowed us to proceed with installing corridors and doors.

The buildings were contiguous, but the floor slabs were at several levels and made from different materials. To bring them into conformity, we poured a 3-inch concrete overlay.

Because demolition was ongoing, new problems constantly appeared. Unlike new self-storage construction in which design, permit and building phases follow sequentially, this was the type of project in which design and redesign can often continue until occupancy.

In this case, the owner also continued to make changes. Toward the end of the project, he wanted to install new exterior access to the basement. The change required a second fire exit, for which I supplied plans, but the concrete contractor installed it backwards. He tore it out and repoured it, and I continued to answer all requests from the building inspector for plan changes. Fortunately, he was a man of character who was patient and understanding.

As these two self-storage conversion projects demonstrate, problems can run the gamut between typical and unprecedented. Many can be rectified with creative solutions, while others will depend on outside forces beyond the control of the parties involved. As a predictor of the unexpected, one thing is abundantly clear: Murphy was a visionary.

H. Edward Goldberg is a registered architect and president of HEGRA Architects Inc. in Baltimore. With more than 40 years of experience, he’s designed self-storage projects in Connecticut, Delaware, Maryland, New Jersey, Pennsylvania, the Virginias, and Washington, D.C. He’s been a speaker at self-storage and design-build industry conferences and has authored 14 books on computer software for building design. For more information, call 443.690.0403; email [email protected].