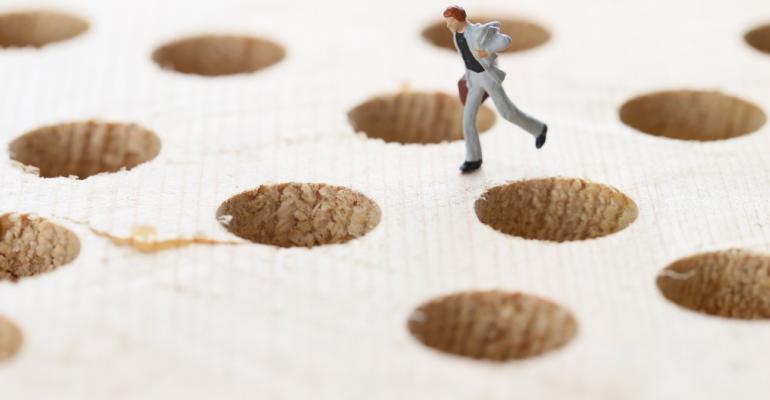 A self-storage owner or developer can encounter many challenges during a building conversion. The author shares four pitfalls to avoid when transforming an existing structure to storage and things he’d do differently on his own projects if he could go back in time.

Building conversions have become an extremely popular way for property developers and owners to enter the self-storage industry or expand an existing portfolio. While converting an existing structure to a storage use can be a smart strategy and certainly has its advantages, there are pitfalls to avoid. I’m going to focus on what I believe are the top four, sharing mistakes I’ve made on real projects. I’ll discuss obstacles my team and I encountered and things I wish we’d done differently.

Make sure the floors of the existing structure are in reasonably good shape and can bear the load of what you want to build. I’ve experienced floors that were in poor condition and grubby, either because of the process used to manufacture them or years of use. I’ve even had to paint floors, which I hate, because once you go down that road, you have to keep up with it over the life of the project.

Make sure you know the floor load required by your self-storage systems fabricator. You can save a lot of money by knowing this before you go under contract on a deal. The good news is, typically, the storage system for a single-story interior conversion is made of light-gauge steel and has no load-bearing needs.

You need to be more careful when you’ll be adding floors to the interior of a building. Typically, you’ll need a minimum 17 feet of height clearance to add a second floor. It’s great to transform a 40,000-square-foot building into 66,000 net rentable square feet of self-storage by going vertical, but make sure the concrete floor is at least 6 inches thick or the storage-system engineers won’t sign off on it.

During due diligence on one project, we discovered the floor was only 4 inches. In fact, an earlier deal had fallen through because of that very issue, but the seller wasn’t upfront about it. We solved the problem by marking where the support columns would be, cutting the floor and expanding its thickness to 6 inches in those areas. Fortunately, the seller was willing to split the $37,000 cost.

Fabricators and engineers will often submit some very strange unit sizes when designing a self-storage project, trying to maximize rentable square footage. This is sometimes unavoidable, especially if you’re adding a second floor and require support columns every 10 feet. Designers will often come up with odd sizes to fill nooks and crannies. But let me tell you, a 2.5-by-6-foot unit with a small roll-up or “passenger” door is a tough one to rent. At the end of lease-up, when you’re 88 percent occupied, what’s usually left are the goofy-sized units no one wants.

I wish I’d been more forceful in challenging the proposed unit mix on a couple of projects. Fortunately, I now have a partner who’s more vocal than I am.

Continue to work on the unit mix until you have one you feel confident you can rent. Avoid odd sizes if you can. You’ll have a few, but keep them to a minimum. Don’t get hypnotized by a bunch of small units that, if rented, could drive up per-square-foot income. Create a unit mix the market will like; then start paying attention to income per square foot.

I don’t know what or when it’ll be, but at some point during your conversion project, a curve ball will be thrown at you. On one project, we took a last-minute $100,000 hit when an inspector required us to erect a concrete-block firewall to separate our office area from the storage spaces. Neither the architect nor engineer anticipated the issue.

Demolishing an existing structure will often reveal unanticipated, hidden issues you’re forced to deal with. Regulations and building codes change. To say within budget, you need to be prepared for the unknown.

Fortunately, we had a 15 percent contingency ready on the firewall project, of which we used every cent (and a little more). If we’d planned only a 5 percent contingency, we’d have been in real trouble. If you budget properly in anticipation of last-minute surprises, you’ll be glad you did.

I can't explain why, but we’ve experienced numerous problems with self-storage customers who can’t drive very well. On one project, we decided people would feel safer if we installed a gate arm that would come down after a car or truck entered the property. It was intended to prevent tailgaters from following behind legitimate visitors. I think we abandoned the arm after replacing it for the fifth time. Drivers (mostly those with trucks) would plow right through it.

If there’s a way for someone to hit a building or door with a moving truck, assume they will and protect your property. We’ve had to strategically install bollards in many places to stop trucks from repeatedly backing into our buildings. We had to learn the hard way to design properties so that customers never have to put their truck in reverse. If they have to back it up, they’ll hit something, period

It’s much easier and less expensive to plan for these kinds of accidents during development than to try to fix flaws retroactively. Get creative in your building protection; you’ll need it.

I wish I’d known about these pitfalls as we were developing our first few conversion projects. It would have saved a lot of time, money and frustration. But even if you have to deal with these and other issues, it’s well worth it. For small investors, there may not be a better way into self-storage than through a building conversion. The best performing projects in our portfolio are the conversion sites we’ve completed, pitfalls and all. Have fun and go for it.

Mark Helm is a commercial real estate agent and self-storage investor. He began working with real estate investment trusts in the mid-1990s to locate and purchase self-storage properties before striking out on his own. He’s the author of “Creating Wealth Through Self-Storage” and the creator of “Storage World Analyzer,” a cloud-based, financial-analysis software tool designed to help self-storage operators and investors evaluate potential real estate acquisitions or development projects. To reach him, e-mail [email protected].

Planning a Self-Storage Conversion? Here Are the 4 Biggest Expenses to Expect and Ways to Ease That Pain
Feb 09, 2022