Stein Investment Group, an Atlanta-based private real estate investment firm, has invested $17.2 million in three local self-storage properties that together will comprise nearly 250,000 square feet of storage space when the development projects are complete. Two of the locations are expected to open early next year, while the reconstruction of Hudson Self-Storage following a fire last year was finished in March.

Update 9/18/13 The Decatur Street Self-Storage project, currently under way as part of Stein Investment Groups $17.2 million investment in three Atlanta-area storage properties, has not been without controversy. Some residents and city officials have argued against the Decatur facility, believing the business type is not appropriate for its location within the citys Old Fourth Ward. In his opposition to the project back in April, councilmember Kwanza Hall used the Twitter hashtag #nomorestorage to communicate about the proposal.

The Stein group believes the design (pictured below) of the five-story, $9.2 million project will fit right into the aesthetics of the Beltline District and offer amenities local residents will appreciate. In addition to self-storage, the property will feature a retail storefront, which may include a coffee shop equipped with public WiFi.

The facility is expected to open in January. 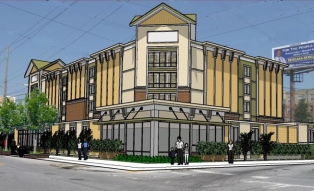 9/6/13 Stein Investment Group, an Atlanta-based private real estate investment firm, has invested $17.2 million in three local self-storage properties that together will comprise nearly 250,000 square feet of storage space when the development projects are complete. Two of the locations are expected to open early next year, while the reconstruction of Hudson Self-Storage following a fire last year was finished in March.

"What used to be a product known for unattractive metal buildings with storage subject to environmental conditions has evolved to an asset class that is architecturally attractive, many with modern retail storefronts offering coffee and WiFi services, with climate-controlled, secure space in upscale or burgeoning communities," said Jeff Stein, the firm's founder and principal. The reality today is that there are Atlanta submarketsboth in town and suburbanthat fall well below the national average of 7 square feet of self-storage space per person, which is even higher in urban markets.

The companys most recent acquisition was a 1.42-acre property on Johnson Ferry Road in the heart of East Cobb, a northern suburb of Atlanta. The firm closed on the asset this month and plans to invest $6.5 million to create a three-story facility comprising 90,000 square feet and 573 storage units. The climate-controlled Johnson Ferry Self-Storage building will include two oversized elevators and electronic access. It will feature a retail office offering storage supplies, a coffee bar, WiFi, community bulletin boards and wine storage. The project is expected to be completed next March.

Also under construction, Decatur Street Self-Storage is a five-story, $9.2 million project in Atlantas Beltline District. The facility will comprise 110,000 square feet in 854 units. The building will be climate-controlled, with two oversized elevators, a covered loading area, drive-up exterior units and a conference facility. The property will also feature a retail storefront, electronic access, motion-controlled lighting, music, intercoms and large corridors. The project is expected to open in January.

Even after our facility is complete, the trade area will still only contain 5.3 square feet per person, and most of the existing product is aging, Stein said.

Unlike the East Cobb facility, the Decatur Street property will cater primarily to apartment and condominium residents as well as students attending Georgia State University, Stein said. "This market has seen healthy residential growth driven by the neighborhood's proximity to downtown and midtown," he said.

Once the projects are completed, the firm will own and operate four self-storage facilities. Each will be managed by Universal Storage Group, an Atlanta-based provider of third-party management services for the self-storage industry. Stein Investment Groups 1.5 million-square-foot real estate portfolio currently includes more than 200,000 square feet of self-storage space.