The wine-storage area comprises more than 140 units in varying sizes, with an option for tenant customization. The area features a biometric security entrance, redundant refrigeration systems and a backup generator. Kept at 55 degrees and 70 percent humidity, it includes an alarm to notify staff in the event of a climate change. Carts are available to help renters transport their collections.

“We are incredibly excited to introduce a new level of wine and self-storage to South Beach. There is nothing like this on the beach. Residents and local business now have access to state-of-the-art wine [storage] and self-storage,” said David Blum, president of Better Management Systems LLC (BMS), the firm managing the property. Blum and his son, Eric Blum, also acted as consultants during the project’s development, according to a press release.

The project was financed with a $5.11 million loan from Florida Community Bank. Property records show the land last traded in 2008 for $1.3 million, though entities controlled by Potamkin were on both sides of the transaction, the source reported. EP Sobe is managed by Edelman.

2/9/15 – After four years of attempts, EP Sobe Storage LLC has finally received design approval from the Miami Beach, Fla., Planning Board to build a 22,500-square-foot Urban Box Self Storage facility at 633 Alton Road, just off the MacArthur Causeway exit ramp, at the gateway to South Beach. The property will feature 200 climate-controlled units, wine storage, biometric security and a backup generator. Construction is slated to begin in June.

Before they could make their dream a reality, EP Sobe principals Ken Edelman, a real estate developer, and Alan Potamkin, co-chairman of Potamkin Automotive Group Inc., had to convince the board to rezone the area to allow self-storage, according to sources. Edelman told board members the area was underserved, noting the community only has a few storage properties, all of which are near capacity. Edelman conducted a market study based on the need for seven square feet of self-storage space per resident and found the city needs more than 250,000 square feet of storage capacity, a source reported.

The next obstacle was gaining design approval for the building, which will be in the Historic Art Deco District, a stylish neighborhood listed on the National Register of Historic Places. Planning board members feared the facility would be plain and boxy, sources reported.

EP Sobe Storage hired Gutierrez & Lozano Architects of Fort Lauderdale, Fla., to design the project. After numerous changes, the city approved a design that follows Miami Modernist Architecture, also known as MiMo, a style that originated locally in the 1950s and ‘60s. Co-owner Manny Gutierrez put a great deal of time into the project to make it one of the most attractive self-storage facilities in the world, Edelman told the South Florida Business Journal.

The site of the future storage facility isn’t great for retail because it's not easily accessible when driving south, but it has great visibility, Edelman said. He also hopes to build a 70,000-square-foot storage facility along the Coral Highway near Southwest 37th Avenue, he told the source.

EP Sobe Storage, based in Coral Gables, Fla., is a limited liability company that was launched in November, according to Bizapedia.

Alan Potamkin, who co-chairs his family auto dealership with brother Robert Potamkin, has an estimated net worth of $150 million. Founded by Victor Potamkin in 1954 in Philadelphia, the company is now headquartered in Miami. 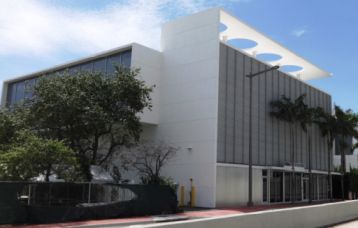