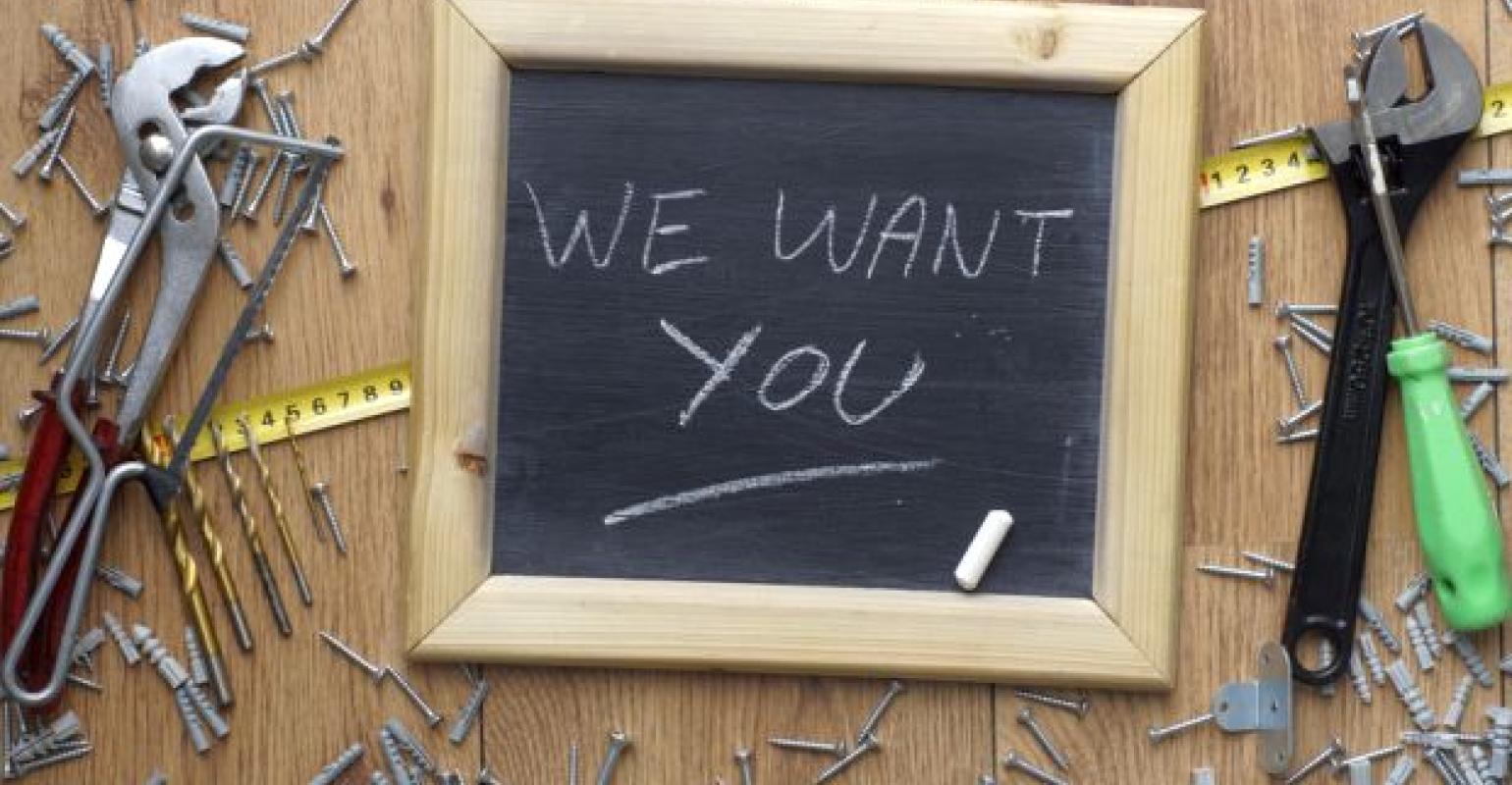 As new self-storage facilities continue to spring up nationwide, many builders are struggling to find qualified workers. A labor shortage across the U.S. construction industry has led increased project costs and delays. Here’s how developers are facing these challenges.

From the outside, building a self-storage facility might seem simple. After all, it’s predominately steel and concrete. You’d think it would be easy to find workers to erect them, right? Sadly, that isn’t the case in 2017.

With development on the fast track, the number of people qualified to construct storage sites is dropping, and the industry is starting to feel the pinch. From delayed materials to contractors who are simply overloaded, the labor shortage is crippling the U.S. construction industry, which only recently found its footing after The Great Recession.

It was those lean years that led to today’s lack of workforce. New construction across all industries dried up, costing 2.3 million jobs between 2006 and 2011, according to Tradesmen International, a recruiter and resource for the building industry. All facets suffered from this loss, from general contractors to metal-building manufacturers, plumbers to brick-layers. And while some have once again strapped on their toolbelts, the downturn made an impact that’s affecting anyone building today.

“We have clients who’ve had their project schedules severely impacted due to lack of mobilization ability, sometimes forcing projects to sit idle for weeks while waiting for subcontractors to become available,” says Angie Guerin, national sales manager for Mako Steel Inc., which designs, supplies and installs steel buildings for the self-storage industry. “It has also driven up the cost to build as we compete in the labor market for the limited skilled workers.”

To understand what’s happening in the construction workforce, we must go back a decade. When the housing boom became a bust in the mid-2000s, many workers were forced to find new occupations. During its peak in 2006, the industry employed 7.7 million, according to an article on ConstructionSuperintendent.com. It lost roughly 1.2 million.

“As construction projects began to come back online over the last several years, those individuals who had left the trades were too established in their new careers to make the switch back to the construction industry,” says Joel Sikkila, a partner with Synergy Self Storage, which completed a project last year and has another in the works.

Now the construction industry is also failing to attract new talent. Over the past decade, high schools have shed their vocational education, which often spurs interest in trade work. There’s also been a cultural shift away from traditional blue-collar work, as technology-based jobs appeal to younger generations.

Despite the influx of new building projects across all sectors, job fulfillment has yet to rebound. According to the Bureau of Labor Statistics, there are nearly 200,000 unfilled construction jobs in the United States, an 81 percent jump in just two years. In fact, “labor shortage” was named one of the five trends to watch in commercial construction this year by ConstructConnect, which provides data for the industry professionals.

The simple volume of building is also adversely affecting many self-storage projects. “In our markets, there are many other construction projects underway—office, residential, retail, etc.—which creates a shortage of subcontractors in the areas of concrete, masonry, electrical, HVAC and others,” says Steve Tangney, vice president of real estate for West Coast Self-Storage, which has nine properties under construction or development in three states. “Second, the construction boom in self-storage has created a shortage in the storage-specific trades such as metal-building contractors and roll-up door suppliers.”

Furthermore, self-storage construction has become more specialized than it was even five years ago. Today’s properties are more complex, with bigger offices, conference rooms, vehicle storage and other special features. Many developers are incorporating advanced materials and designs into their projects, and multi-story building is becoming more popular as land is being gobbled up in urban markets. This type of construction comes with a unique set of requirements.

“For the actual storage buildings themselves, the volume of work being done across the country, along with the limited number of truly knowledgeable self-storage erection crews, has led to the labor shortage,” says Jim Chiswell, owner of Chiswell & Associates LLC, which provides feasibility studies, acquisition due diligence and customized manager training for the self-storage industry. “You shouldn’t assume that just because a contractor says he knows how to erect pre-engineered metal buildings that he knows self-storage.”

The labor shortage has affected self-storage development on several levels, adding to the overall cost of just about every project. A scarcity of qualified employees means those who are skilled can charge more for their services. Plus, smaller crews often mean longer hours on the jobsite, which leads to overtime pay.

“We are constantly reaching out to new installer groups and dangling the carrot of higher wages and higher profit as well as utilizing our experience and company skill set to help small businesses interested in providing labor services succeed,” Guerin says. “The drawback is that higher wages result in higher construction costs for our clients, and this creates a whole new subset of problems.”

In New Hampshire, the unemployment rate is only 2.8 percent, well below the national average. However, due to the labor shortage, subcontractors are paying more to retain skilled laborers, Sikkila says. “As a result, they’re charging more for their work.”

Less manpower at a construction site also leads to project delays. “At this point in time, many subcontractors are still nursing wounds from the recession and are leery of turning down any work. Construction crews are stretched thin, and the project schedule is affected,” Sikkila says.

For example, one Silicon Valley developer shares a story in which the slab-on-grade for a project should’ve been prepared and poured five months ago. However, due to the general contractor being unable to hire a qualified underground/grading subcontractor, the company missed its opportunity. “This was then followed by an exceptionally wet rainy season, putting us about five months behind schedule,” the developer says.

While a several-month delay is an extreme case, a work interruption of a week or even a few days can throw a self-storage project off schedule and escalate costs. “Obviously, time is money, so a delay of one, two or three months in getting a job completed can get very expensive,” Chiswell notes. “Since most developments involve borrowing money, even with interest-only periods, you’re still writing checks.”

It’s not just subcontractors who are struggling to meet deadlines. Many storage-specific vendors, notably metal-building and door manufacturers, are also challenged by the labor shortage. The turnaround time between the product order and delivery has been extended as vendors attempt to keep up with demand. Even obtaining inspections and approvals from city officials takes longer due to increased construction volume.

All these factors have contributed to an extended project timeline, possibly 15 to 20 percent longer than what was once considered a typical development schedule, says David Robinson, director of construction for NitNeil Partners LLC, an Atlanta-based firm specializing in self-storage. “In time, we may look back and call it the new norm,” he says.

While labor scarcity and related delays are frustrating, developers are taking steps to fight it. “As development continues to ramp up, I believe the subcontractors and developers will begin to adapt to the labor shortage on a local level and make adjustments as necessary,” Sikkila says. “Accordingly, the labor shortage will not have much more of an impact than has already been experienced. The larger concern will be whether the specialized contractors—the storage building-component manufacturers and their install crews—will be able to keep up with the demand.”

Being honest with clients about extended timelines, rising costs and other challenges is also critical. “We’re really trying to arm them the best we can, and most important, we’re working hard to not make promises and commitments that we can’t keep,” Guerin says. “It’s a tough time to be a developer, between product-cost escalation and labor shortage, and lack of skilled trades to support the construction, in conjunction with the fact that it’s busier than ever. I think we all have had to approach the ‘process’ with some humility—suppliers and developers alike.”

The Silicon Valley developer is taking a proactive approach, building relationships with subcontractors for trades he doesn’t currently have under contract. His company is also bringing in crews from other regions when necessary.

Larger companies can take advantage of economies of scale. “For us, it helps that we have several projects under construction at the same time and we can use the same people at any of our facilities at different times,” said Daniel Lyman, co-founder and partner of Get Space, which currently has six sites under construction. “We've had to adapt some design elements of the projects to spread the scope of work among more groups, especially those outside the self-storage industry.”

An important factor to remember about the industry’s current state is construction has always been a cyclical industry, no matter what niche you're in, Robinson says. “Self-storage is rampant now, but there will be a point of saturation sooner than later when supply exceeds demand, resulting in a slowing pace of new developments. At that point, the problem will naturally disappear.”

The best advice in the meantime is to simply practice patience, Tangney says. “If you’ll be starting construction soon, focus on realistic schedules that acknowledge the labor market conditions in your region.”