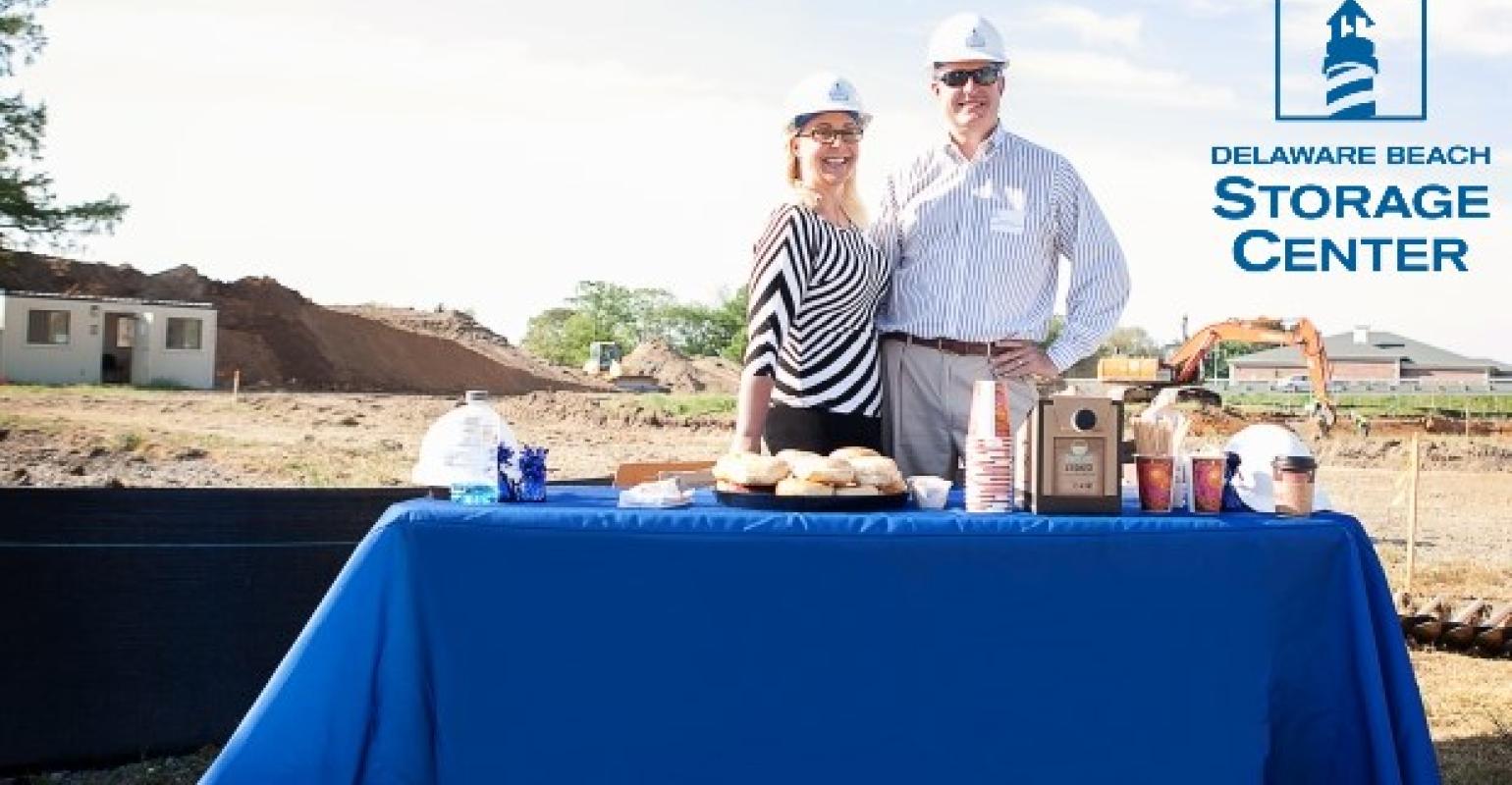 When Blair and Timarie Thompson decided to build a business on their 5-acre parcel of land in Lewes, Del., they suspected self-storage was the right fit; but being first-time property developers, there was a lot they didn’t know. This article outlines their journey through project conception, design and approvals to the ultimate groundbreaking.

New construction, regardless of the industry, can be daunting. In late fall 2014, when my husband, Blair, and I were thinking about ways to use a parcel of land we own in Lewes, Del., we had many questions: What was the best use of this highly visible property? What can the market support? What would the county approve? What would the bank allow?

Blair grew up near Lewes, in the coastal town of Rehoboth Beach, Del. Rehoboth used to be a sleepy beach town that shut down from October through April. Over the past 10 years, it’s become a major attraction for people of all ages due to its proximity to the coast, a high standard of living, no sales tax and low property taxes. It’s now popular with tourists, welcoming more than 6 million visitors annually.

A pilot by training, Blair has some property-development experience from his family’s drugstore and real estate business. He has no experience in the self-storage industry.

I grew up outside of Washington, D.C., with a background in finance, marketing and strategy in the commercial real estate and technology sectors. Like Blair, I have no self-storage experience. Lack of industry-specific knowledge aside, we knew that with the explosion of growth in our area, we wanted to be smart—and strike while the iron was hot.

Our 5-acre, commercially zoned parcel of land had been in Blair’s family for more than 60 years. Before he bought it in the early 50s, Blair’s father worked at the grain mill that sat on the property. It had sentimental value.

It also had financial value. It was a large, empty lot, ripe for development. From a visibility perspective, you won’t find much better. The land abuts the highly travelled Coastal Highway, which sees an average of 45,000 cars per day. However, access could be an issue for any high-traffic project due to ingress/egress challenges.

While we were considering ideas for the parcel (hotel? convenience complex? big-box store?), we learned the county was contemplating a height restriction on new commercial buildings, limiting our project’s potential. To avert this constraint, Blair, with the assistance of a local civil-engineering firm, petitioned and won approval for a four-story building, which was no small feat.

In January 2014, some friends of ours were downsizing and moving to Rehoboth. They told us about the lack of quality, climate-controlled storage units in our area. There were plenty of standard drive-up facilities, but the existing climate-controlled facilities were completely leased. That’s when we had our “A-ha!” moment.

Our land is both an opportunity (visibility) and a challenge (access). However, we decided the access issue wouldn’t be a problem for a storage facility after learning of the low number of trips per year customers make to their units. (Research by the national Self Storage Association shows 71 percent of renters visit their unit once per month or less.)

Our idea to build a climate-controlled self-storage facility was further predicated on the changing nature of our town’s market and the explosive growth. More than 900 single-family homes are being built within a 2-mile radius, most with no basements and smaller than normal garages. With increasing numbers of people moving to the region from larger cities, there would be different product expectations in terms of service, technology and security. There was no existing 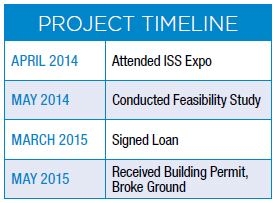 product to meet these needs.

Given what we were learning, we thought building a storage facility was a no-brainer. However, with a project this big, we couldn’t just go on our gut. We needed expert advice. In April 2014, I attended Inside Self-Storage World Expo in Las Vegas. I participated the Developers Workshop and numerous other classes. Aside from feeling like I’d been drinking out of a firehose, I learned we didn’t know what we didn’t know, and to be successful on this project, we needed to build a team of industry experts that could teach us and help us avoid costly pitfalls.

I didn’t attend the conference merely to learn the ins and outs of self-storage, but also to find an expert to do a feasibility study for us. After speaking to several people, I thought the best fit was industry expert Jim Chiswell of Chiswell & Associates LLC. By May 2014, he had returned an analysis that confirmed our market would support self-storage, but not the four stories or footprint we had planned. Had we developed the land using our initial concept, we would have overbuilt. The feasibility study helped us avoid this potentially expensive mistake.

Once we finalized our concept, it was time to mobilize troops. While Blair worked on getting the preliminary plans approved by the county (never underestimate approval time), I assembled our team of experts, established our name (Delaware Beach Storage Center), designed a logo, built a temporary website, and set up our legal and accounting framework.

I also began to work on a budget. What I didn’t realize at the beginning of this process was how integral this piece would be when it came time to seek funding. I was knowledgeable about budgeting but had never created a development budget from scratch. The task seemed overwhelming.

I took it one step at a time. I created my spreadsheet, noting all the line items I could think of. Some were obvious, but many others weren’t, so I didn’t hesitate to ask others for input (e.g., What permits will we need? How much that will cost? What am I missing?). After about a month, I had a comprehensive development and marketing budget. Was it perfect? Hindsight has shown me it wasn’t. Would it stand up to the bank’s scrutiny? I had confidence it would.

With a solid budget in place, we reached out to lending institutions. The loan process can be arduous and stressful, especially for a project of this size. While we 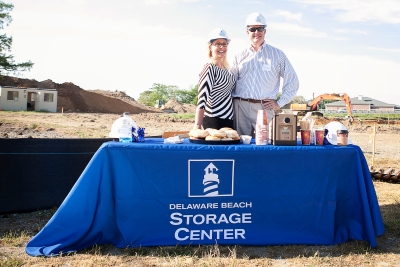 put a fair amount of work into courting, the most invaluable asset we had was the feasibility study and the financial projections, as well as the construction, development and marketing budgets. After receiving several favorable offers, we chose a bank and signed the loan on March 31, 2015.

Making the Idea a Reality

Before we signed the loan, we researched and interviewed general contractors (GCs). While we preferred to keep our business local, most builders in our area had no experience with climate-controlled self-storage; and frankly, most were maxed out due to the explosive residential building in our community. On Dec. 24, 2014, we agreed to terms with a GC and architect, both out of Baltimore and both with extensive experience in self-storage. We didn’t need to reinvent the wheel. 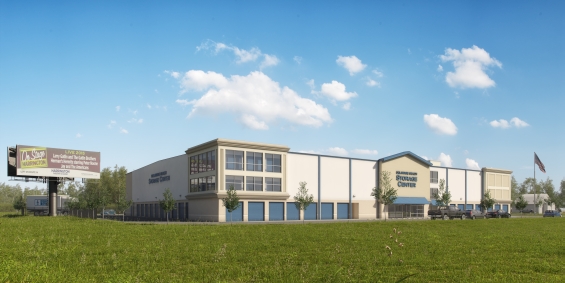 While working on the preliminary county approvals, we started looking at different facility designs nationwide. What aspects of a specific project did we like or dislike? What would fit best in our community and on our parcel? After answering these questions and weaving together various elements, we turned the design over to the architect. After some back and forth, our three-story, 106,000-square-foot facility was closer to reality.

We faced several challenges throughout the process, which is normal. Approvals took longer than we planned. To appease local officials, we had to change aspects of the project that we would have liked to keep. We had to constantly balance facility aesthetics and amenities with our budget goals. But after some compromise, the county granted our building permit on May 13, 2015. Two weeks later, we officially broke ground.

Developing a self-storage project isn’t overly complicated, but there are many aspects that are unique to this industry. Even if you’re an experienced developer, be prepared to surround yourself with seasoned experts and learn from them. This is a team effort. Know your numbers, admit you don’t know everything, learn from others’ mistakes (and successes), pay attention to detail, and then make it happen.

Delaware Beach Storage Center is on target to be complete in May 2016. Watch Inside Self-Storage for more about the Thompsons’ story as it unfolds.

Timarie K. Thompson and her husband, James Blair Thompson, are the owners of Delaware Beach Storage Center in Lewes, Del., scheduled to open in May 2016. Timarie has been involved in the marketing and strategic-planning fields for more than 20 years. She lives in Rehoboth Beach, Del., with Blair and their son. For more information, e-mail tthompson@debeachstorage.com; visit www.debeachstorage.com.