From Golf-Cart Kid to Facility Owner: An Entrepreneur Realizes His RV/Boat Self-Storage Dream

A family’s dream became a young entrepreneur’s reality when he opened a 17-acre boat- and RV-storage facility in the desert near Tucson, Ariz. Nick Sheldon shares the journey from “self-storage kid” to owner of Tucson RV Storage.

A mother’s heart skips a beat when she gets that call from her son, the one that begins with “This is it, this is the one...” But when Nick Sheldon used those words during a phone call to his mother, he wasn’t talking about his future life partner. He was referring to his love at first sight for the razor-wired, fully fenced, 17 acres of desert land near Tucson, Ariz. It was the perfect location for making his dream of owning an RV- and boat-storage facility come true.

From the time Sheldon, now 27, saw the property, to the time he opened Tucson RV Storage last November, only15 days had passed. Though that’s a very short timeline, Sheldon’s history in the storage industry is much longer.

It starts with Sheldon’s parents getting into the business in 1978 as managers for a facility in Michigan. When Sheldon was two, they moved to Arizona to manage another storage property. His parents stayed in self-storage management until their retirement a few years ago.

The family lived on site, and it was a situation that suited Sheldon just fine. It allowed him to do things other kids couldn’t, such as driving a golf cart. He appreciated other things about the arrangement, such as being outdoors and essentially living in a gated community with no neighbors, he says.

As a teenager, he found living at the facility provided another opportunity: a part-time job. "If a big truck drove in, I'd get right over there and ask, 'Hey, do you need help unloading that truck?' and the next thing I knew, I had extra cash in my pocket.”

Although his parents often talked about facility ownership, they decided that because they had kids, they didn't want to take the risk of owning their own business. “But we'd often talk about doing it as a family some day. What always made the most sense was starting with something like an RV storage, since you didn't have to put up four walls and a roof,” Sheldon says.

After high school, Sheldon took some college courses and worked long hours to cover his expenses. “I had five jobs,” he says, including his own moving business, bussing tables, transporting trucks, night security and a part-time job as a self-storage manager. “I was working a lot, and I was working hard making a living. But then an obstacle came my way."

That obstacle was a car accident that caused a severe back injury. During the next six months of recuperation, it became clear Sheldon couldn’t depend on his back to make a living any longer. "I realized I was going to have to depend more on my brain,” he says. “I was going to need a desk job. And I knew exactly the job I could do. That injury was what really made me pursue getting into the storage business. But I wanted to get more experience, so I took manager jobs. I learned customer service. I learned what customers like to see. I realized I could do what it takes. I became very successful with it."

Mentally ready to take the ownership risk, Sheldon says he kept looking for just the right physical layout. One day while doing an errand for his dad, he spotted a property with potential in an unincorporated area of Pima County, Ariz., near Tucson. He got out of his truck and looked over the brick wall. Sheldon says he couldn’t believe his eyes. "I saw this facility, an old auto-auction facility,” he says. “I saw a bunch of open land that was already secured. Block-wall perimeter. Razor wire. An electric fence that went all the way around. It was all there. It was amazing."

He immediately filed the required paperwork. Zoning was not an issue, as the auto-auction facility was already approved for vehicle parking. The hardest part was raising the funds to finance his new venture. "No one wants to lend money,” Sheldon says. “I talked to everyone: family, hard-money lenders. I reached out to everyone." Finally, the finances fell into place and Sheldon was on his way to realizing his dream.

As the business grows, he plans to offer additional amenities including mobile-detailing services, mechanic services and propane sales.

Sheldon says he’s grateful for his family’s input and often taps into their self-storage expertise when tough decisions and challenges surface. "I'm lucky,” he says. “My parents have been really supportive. Their experience from 20 years in the business is invaluable. I have an uncle who's been in the business for 15 years, and a cousin who's been in it for about 12 years. I learn a lot from all of them." 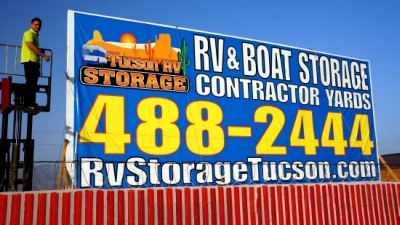 Since opening Tucson RV Storage, Sheldon says business has been good. His facility is modernized, with video cameras and keypad access a part of the many security measures. But he believes there’s another factor attracting new business. "My customer service is what brings them in and keeps them coming,” he says. “And word of mouth about my customer service is key.”

But Sheldon adds with a chuckle, “It doesn’t hurt to have painted the wall bright orange to catch a new customer’s eye.”

Kay Miller Temple is a physician and recent graduate from the master’s program at Arizona State University’s Walter Cronkite School of Journalism and Mass Communication. She wrote this article while working as an intern for Inside Self-Storage.