"We are proud and excited to be a part of the positive news happening in Cleveland's revitalization. We believe this storage center will help serve the needs of the growing downtown residential and business population," said Todd Amsdell, president.

Amsdell plans to open a second Cleveland-area facility in Shaker Heights in 2015.

12/10/13 – The Amsdell family of companies plans to convert a cluster of three buildings on the eastern edge of downtown Cleveland into a 60,000-square-foot, 700-unit self-storage facility operated by Compass Self Storage LLC. An affiliate of the company purchased the property earlier this year for $1 million. This will be the first self-storage project the company has completed in the city where it is headquartered.

The group of buildings at 1544-1559 Superior Ave. will serve downtown residents and businesses. The property is within a few blocks of apartments, Cleveland State University and office towers, according to the source. Hainrihar said he expects residential customers to comprise about 70 percent of the facility’s tenant base and anticipates business demand will be high. The facility will offer climate-controlled units as well as document-storage services.

The building cluster is comprised of single-, two- and three-story structures. The three-story building at 1559 Superior Ave. is the largest and was designed in the 1920s to hold stationery for a paper company.

"These are great buildings," Hainrihar said. "If the building already is there and we can get it at a good price and successfully do the conversion, it ends up being a little bit less expensive for us to purchase and convert."

Interior demolition is already underway. Amsdell also plans to restore the buildings' facades, while adding signs, lighting and awnings. The company presented plans for the conversion project at a city design-review meeting last week, according to the source. Compass expects to open the facility next summer.

Headquartered in Cleveland, the Amsdell Cos. draws its roots from the family-owned construction company founded in 1928. The company, which owns and operates self-storage properties in Florida, Georgia, Kentucky, Michigan, Mississippi, New Jersey, Ohio, Pennsylvania and Tennessee, has since been active in several billions of dollars worth of real estate ventures with a primary focus in self-storage. 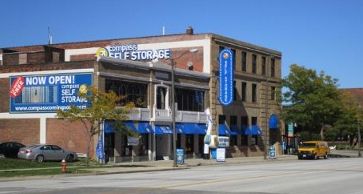