The owners of Valley Storage Co., which operates 37 self-storage facilities in six eastern states, have donated $15,000 to the Berkeley County Sheriff’s Department in Martinsburg, West Virginia, to support a new K-9 drug officer and his handler. Todd and Tina Snook are working with Sheriff Nathan Harmon to bring more resources to the Uniform Patrol Division, which includes the patrol, K-9 and DUI (driving under the influence) enforcement units, according to a press release.

Cpl. Corey Welcome will be the handler for 16-month-old Mates, a German Shepherd from Poland. They’re one of two teams that graduated from a training program on Sept. 9. The K-9 unit supports the department in explosives detection, narcotic interdiction, patrol, and search and apprehension operations. The unit recorded 5,000 responses in 2018 for back-up assistance, K-9 officer demonstrations and narcotics detection, the release stated.

“Valley Storage is proud to support the communities in which we serve,” Tina Snook said. “We are grateful for the opportunity to help the Berkeley County Sheriff’s Department add another resource for law enforcement.”

Based in Hagerstown, Valley Storage opened its first location in Williamsport, Maryland, in 1986. It owns more than 2 million square feet of storage space in Maryland, Ohio, North Carolina, Pennsylvania, Virginia and West Virginia. The facilities are managed by Storage Asset Management, a York, Pennsylvania, property-management firm. 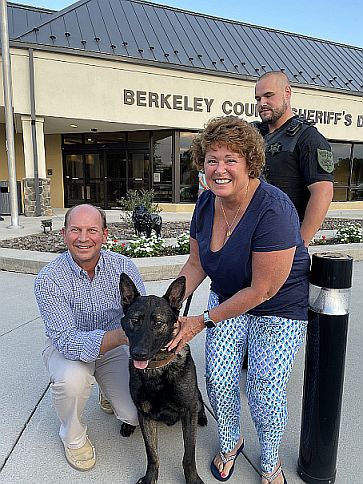