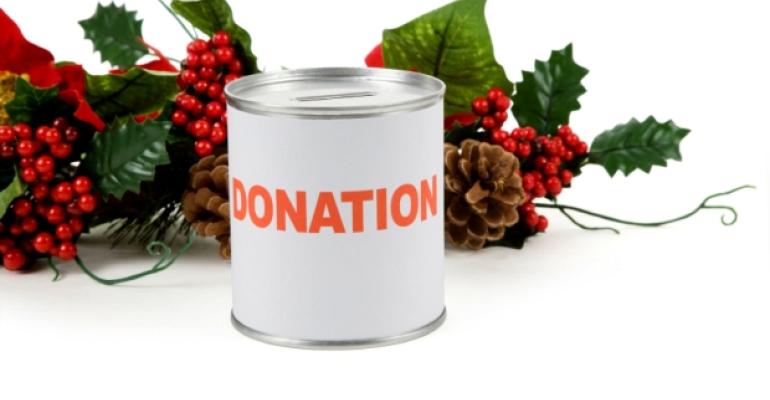 Self-storage operators around the world have launched charity drives to collect clothing, food, toys and more for various organizations this holiday season. Here’s a summary of how they’re giving back to their communities so far in fall/winter 2015.

Safestore, which operates more than 120 self-storage facilities in the United Kingdom, provided storage space and collected donations of games, stationary and toys last month. The items were donated to Variety, the Children’s Charity, which supports disabled, disadvantaged and sick children in the U.K.

The operator encouraged youth to donate “just one week’s pocket money to buy a small gift that could make a real difference to children less fortunate than themselves at Christmas,” said Chris Young, manager of Safestore’s Eastbourne facility.

Variety is known for its “Sunshine Coaches,” a program that caters to children with special needs. It also provides wheelchairs for children, and raises funds to pay for equipment for sick children who are cared for at home.

The Memphis, Tenn., headquarters for Absolute Storage Management (ASM) as well as several properties the company manages, are acting as drop-off locations for the U.S. Marine Corps Reserve Toys for Tots. Participating facilities include Blue Lick Self Storage, Freedom Self Storage, Guntersville Self Storage, Signal Mountain Self Storage and Storage Locker. Blue Lick is also collecting canned goods and monetary donations for Dare to Care, an organization that helps feed children in need.

Four Budget Self Storage facilities in Sarasota and Tampa Bay, Fla., are participating in the “Be a Santa to a Senior" program, which provides gifts to seniors during the holidays. The facilities have a tree on display with paper ornaments bearing names and gift requests.

"Shoppers pick ornaments from the trees, buy the listed items and return them unwrapped and with the ornament attached," said Lisa Herlache, owner of the sponsoring organization, Home Instead Senior Care. The program runs through Dec. 10.

Robin Emanuel, marketing coordinator for Budget Self Storage, learned about the program from Ray Roel, the community-service representative for the Tampa and Brandon chapters of Home Instead Senior Care. “I knew this was a great opportunity for Budget Self Storage to bring awareness and serve our seniors in our community. There are many great organizations reaching the needs of children and families during this season, but not for our seniors. We recognized the need, and four of our locations jumped on board to help,” Emanuel said.

Founded in 2002, ASM owns and manages 85 self-storage facilities throughout the Southeast. The company is actively seeking to expand its portfolio through traditional third-party management relationships and acquisition/joint-venture opportunities. It has regional offices in Atlanta; Charlotte, N.C.; and Jackson, Miss.

Founded in 1985, Budget Self Storage operates facilities in Florida and North Carolina. It focuses on the acquisition, development, management and ownership of self-storage facilities. The firm launched Budget Management Inc. in 1987 in Sarasota, Fla., to oversee it portfolio.

Patterson Self-Storage is locally owned and operated by The Carey Group, which specializes in architecture and planning, general contracting, and real estate brokerage for new homes and self-storage. The property features more than 300 drive-up units and also offers wine storage.

Safestore operates 123 self-storage facilities, including approximately 100 facilities it owns in the U.K. and 24 in France. The company also manages a dozen U.K. sites. Its wholly owned properties comprise more than 5 million square feet of storage space, while its entire portfolio serves approximately 48,000 customers.

11/18/15 – Self-storage operators around the world have launched charity drives to collect clothing, food, toys and more for various organizations this holiday season. Here’s a summary of how they’re giving back to their communities so far in fall/winter 2015.

Access Self Storage of the United Kingdom is supporting several charities as part of its annual Christmas Charity Appeal. This year, the company is seeking donations of new and gently used books, games and toys to benefit Kingston Hospital in South West London. Donations can be made at 592 London Road in Isleworth, Middlesex, England, through Dec. 7. The gifts will be wrapped by volunteers, and then delivered to children at the hospital around Christmas.

Space Station in Slough, Berkshire, England, is serving as a drop-off location and storage site for the annual Observer Toy Appeal, sponsored by the “Slough and South Bucks Observer.” It’s the third year the storage operator has participated in the event. The donations will benefit various social-service organizations in the Royal Borough, Slough and South Bucks, including Alexander Devine Children’s Hospice Service and The Dash Charity. Items can be dropped off at 149 St. Paul’s Ave. through Dec. 6.

A Guardian Self Storage facility in Franklin, Mass., is partnering with Caring Partners Inc. to collect winter coats for its “Coats for Kids” drive, sponsored by Anton’s Cleaners. Donations can be made on Fridays and Saturdays through January 8 at 599 Washington St. The coats will then be professionally cleaned by Anton’s and distributed through the Coats for Kids Distribution Partners network, which includes various charitable organizations. Each fall, Anton’s Cleaners collects, cleans and distributes more than 60,000 coats for children and adults, according to its website.

FireHouse Self Storage is serving as a drop-off location and storage site for the seventh annual Community-Wide Shoe Drive in Fort Collins and Loveland, Colo. Donations of new and gently used shoes can be made at 2600 S. Lincoln Ave. through Nov. 30. The shoes will then be delivered to Homeless Gear and Junior League Career Closet in Fort Collins, and H.E.L.P. International and House of Neighborly Service in Loveland. To date, the charity has collected 15,000 pairs of shoes.

A Storage King facility in Nottingham, England, will store toys collected for the Christmas Toy Appeal sponsored by news organization the “Nottingham Post.” The drive will benefit six local charities. The campaign is part of the Post's Good Deeds Notts initiative, which has included 200 organizations, businesses and individuals raising money for charity or volunteering in their communities. Donations can be made at Unit 1 Lewis Industrial Estate in Radford Road, New Basford.

Access Self Storage operates more than 50 facilities in the U.K., with a large concentration in Greater London.

Formerly ABC Self Storage, FireHouse Self Storage is family-owned. The company’s name and themed décor reflects the company’s personal commitment to the community’s first responders, according to its website.

Guardian is a family-owned company that opened its doors in Fishkill, N.Y., more than 25 years ago. It operates 13 facilities in Dutchess, Orange and Ulster counties.

Space Station is a family-owned self-storage company based in the Greater London area, with facilities across Birmingham and London.