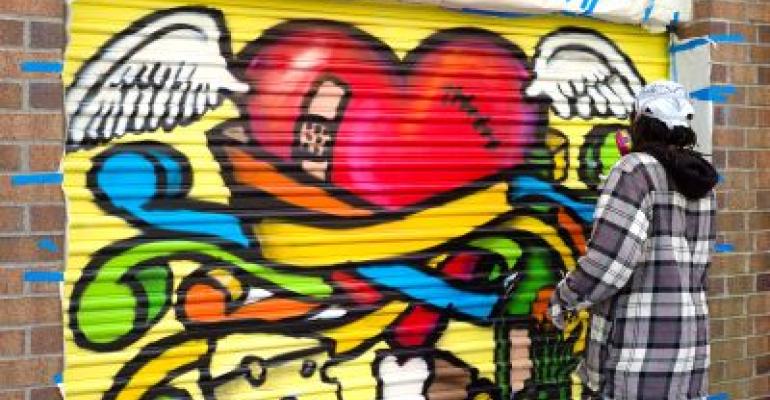 "The turnout was great. We got some amazing artists who submitted applications," said JoAnna Goldberg, director of marketing for Storage Village. By supporting art within the community, individuals are encouraged to think creatively and share their ideas."

In this one-day event, the buildings exterior storage doors became art canvases. Each participant had eight hours to turn a 7-by-8-foot door into artwork depicting the phrase "community service." Artists were able to work with acrylic or spray paint, all provided by Storage Village. They also had the opportunity to contribute to a collaborative mural. Three artists were awarded cash prizes.

Local residents visited throughout the day to witness the process. "We had a lot of families that live nearby stopping in," Goldberg said. "There was music and food and hula hoops, and a big mural that people contributed to. Everyone had a lot of fun."

Some of the facility's tenants also stopped by. As for the artwork, they love it," Goldberg said. "[Tenants] think it's the coolest thing. Especially because of the nature of the paintings. It gives the site a homier feel, less of a utilitarian place to put your stuff and more like a second home for your belongings.

The event also served as a fundraiser by collecting more than 35 pounds of canned food for Manna Food Bank.

Storage Village has four self-storage facilities in Maryland and one in Virginia. The company supports  the arts in its community through volunteering for arts nonprofits and by donating storage space to local arts organizations. 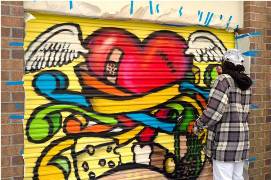 Jay and other artists work on their doors (left), Shannon Scates (right)