ABC presented Spence with a Proud to Buy American plaque Nov. 22. By choosing an ABC metal-building system in the construction of seven of its buildings, Southern Plastics is helping to safeguard American jobs, as well as, provide a green, environmentally friendly alternative to conventional construction. 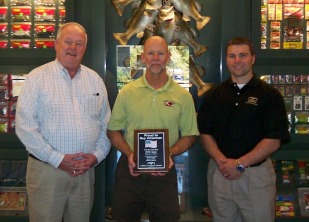 Since 1976, Southern Plastics has manufactured plastic fishing lures for major brands. The company molds the lures with injection machines and packages them to be sold in large department stores, such as Bass Pro Shop. As the largest producer of injection soft-plastic manufactured fishing lures in the country, Southern Plastics is one of the few companies to produce lures in the United States.

We are a small entity so its nice to be recognized, and its an honor to be able to recognize all those that have made this company successful, Spence said.