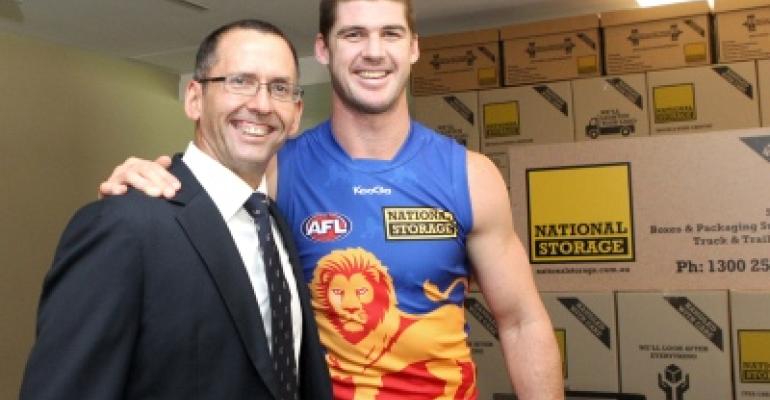 National Storage, an Australian self-storage operator with 61 facilities throughout country, has announced that it will co-sponsor Australian Football League team the Brisbane Lions for the next three years, starting Feb. 1.

National Storage, an Australian self-storage operator with 61 facilities throughout country, has announced that it will co-sponsor Australian Football League (AFL) team the Brisbane Lions for the next three years, starting Feb. 1.

The partnership was unveiled this week at The Gabba, a major sports stadium in Brisbane, Queensland, Australia, by Andrew Catsoulis, director of National Storage, and Malcolm Holmes, CEO of the Lions. Also present at the announcement were Lions Senior Coach Michael Voss, Lions Captain Jonathan Brown and the AFL's first-year players.

The deal will expose the National Storage brand to millions of households, as the company's logo will be featured on the team's guernseys and training gear as well as its media backdrop, stadium signage, and other club media, marketing and online collateral.

This partnership represents a tremendous opportunity to provide National Storage with national public exposure through an association with an iconic brand within the most popular and fastest-growing sport in Australia," Catsoulis said. This is a very exciting opportunity for us. We are hugely impressed with the drive, determination and the underlying ethos at the Brisbane Lions.

National Storage was established in December 2000, following the merger of Stowaway Self Storage, National Mini Storage and Premier Self Storage. The company has 61 storage centers in Brisbane, Gold Coast and Sunshine Coast in Queensland; Sydney Western Suburbs in New South Wales; Geelong and Melbourne in Victoria; Adelaide in South Australia; Perth in Western Australia; and Hobart in Tasmania. National Storage will continue to expand its network through the acquisition of existing sites and the development of "greenfield" sites.