The self-storage industry is experiencing tremendous growth in Asia. Here are some of drivers behind the expansion and what’s next for the market.

I’ve had the amazing opportunity to attend almost every self-storage tradeshow around the world this past year, including ones in Brazil, Europe, Southeast Asia and the United States. As a result, I have a global perspective on our industry. Over the past several years, I’ve explored this business and its development in as many parts of the world as possible. Though there are many similarities, it’s the unique differences and challenges I find fascinating and full of opportunity.

The industry associations have done a great deal to promote education, awareness and support, allowing people to learn how, where, why and what it takes to get started in self-storage. I recently attended the Self Storage Expo Asia in Singapore, hosted by the Self Storage Association Asia (SSAA). The show perfectly exemplified the industry’s worldwide expansion. The association put on an amazing event that was well-attended by existing operators and interested parties from all over the region. Some of the countries represented were Australia, China, Hong Kong, India, Indonesia, Japan, Malaysia, New Zealand, the Philippines, Singapore, Sri Lanka, Thailand and Vietnam.

“The introduction of technology and the great work being done by the Self Storage Association Asia will ensure that the market in Asia continues to rapidly grow to become the size of the Australasian market in the foreseeable future,” says Joe Morrell of Aon Corp., a global provider of insurance, risk-management services and human resources solutions.

Though only about 10 years young, the Asian self-storage market has experienced huge growth. However, the numbers must be somewhat tempered. In the denser urban markets of Hong Kong and Singapore, the model is unique, with more leaseholds and smaller properties (fewer than 20,000 square feet). So when we see that Hong Kong has grown from a single facility twelve years ago to more than 450 sites, the total square feet per person remains low. As the accompanying table indicates, the level of penetration is well below one square foot per person throughout the region. 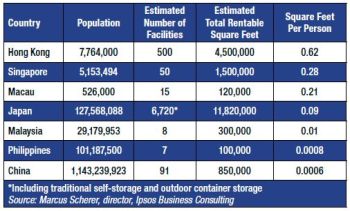 What I’ve found fascinating is this cycle travels, and when one country’s economy slows, another picks up. Even though the same “recession-resistance” applies to self-storage in Asia as in the U.S., when market awareness is limited, the result isn’t always the same. As the industry expands throughout this region, the explosion of innovative concepts still needs to adapt to local cultural needs.

“The definition of the industry itself is undergoing change. The broad definition is becoming ‘storage’ as consumers experiment with other models like valet, on-demand, etc. Therefore, we need to become more broad-minded about its constituents,” said Pooja Kothari, managing director of StoreMore Storage Solutions Pvt. Ltd., which operates five facilities in India.

As in any market, one of the main drivers to expansion is the growth of the middle class. With this comes the similar demand drivers we experience in the U.S. and other storage markets worldwide. According to a July 15, 2015, article published by CBRE, “The Four ‘Ds’ Behind the Surge in Demand for Self-Storage Space in Asia,” those drivers are death, divorce, density and dislocation. Generally, we see the customer base is similar to that in the U.S., with 60 percent to 75 percent coming from the consumer segment. While rental rates are strong, occupancies have room for improvement.

So where is the Asian self-storage market headed? Kevin Chan, founder and chairman of Store Friendly Self Storage Group, which operates more than 100 facilities in Hong Kong, Macau and Singapore, thinks China offers the natural next step. He also sees India, the Philippines and Thailand as presenting development opportunities. In addition, Chan believes there will be more opportunities for mergers and acquisitions.

The development cycle is much faster in Asia, with site selection taking two to three months and development of a 300-unit facility completed in six months. At the end of the day, based on my observations from visiting markets around the world, the Asian market is quickly becoming the next big thing in self-storage.

David Blum owns and operates Better Management Systems LLC, a consulting practice he launched in 2003 to assist self-storage professionals worldwide with issues of development and management. He’s worked in Europe, Greece and Israel, and currently has clients in Mexico, South America and the United States. Since entering the industry in 1996, he’s worked as a district manager for Storage USA and vice president of operation for Budget Mini-Storage in South Florida. He helped co-found the Florida Self-Storage Association in 1998 and is a frequent contributor to industry publications. He can be reached at 954.255.9500 or davidb@bmsgrp.com.

The Gorilla in the Room: What It’s Like to Pioneer Self-Storage in Vietnam
Jan 22, 2020