“This is the first such survey that we have conducted, and it is an important benchmark in the association’s ongoing efforts to support growth across the Asia-Pacific [region],” said Luigi La Tona, executive director of the SSAA.

Of the three primary markets examined for performance data, Hong Kong leads with 23 percent penetration, compared to 15 percent in Singapore and just 2 percent in Japan. Hong Kong also leads in average occupancy rate (90 percent), followed by Japan (85 percent) and Singapore (70 percent). One reason for low market penetration in Japan is a “challenge to overcome consumer misconceptions about the cost of self-storage,” according to the release. 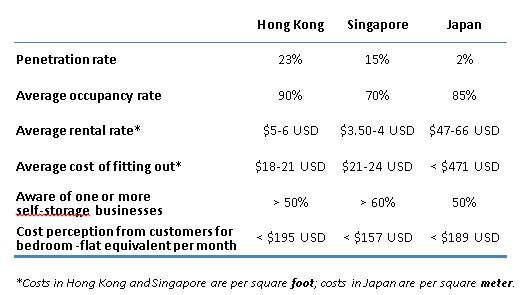 “Our research covering the three core markets of Japan, Hong Kong and Singapore and the emerging markets of China, Taiwan, Philippines, Malaysia and Thailand show that the self-storage industry in these countries is just starting to establish itself and has exciting growth prospects ranging from high single-digit growth to upwards of 20 percent depending on the country and the market,” said Markus Scherer, head of the Ipsos Hong Kong office. “This is truly an exciting time for the self-storage industry in Asia Pacific.”

The findings were first released during the recent Self Storage Expo Asia 2015 in Tokyo. The annual survey is available for free to SSAA members through the association website.

Founded in 1994, Ipsos has offices in 84 countries. It offers marketing-research expertise in the areas of advertising, customer loyalty, marketing, media, public affairs and survey management.