The Japanese Self-Storage Industry: An Overview, Including a Comparison to the U.S. Market 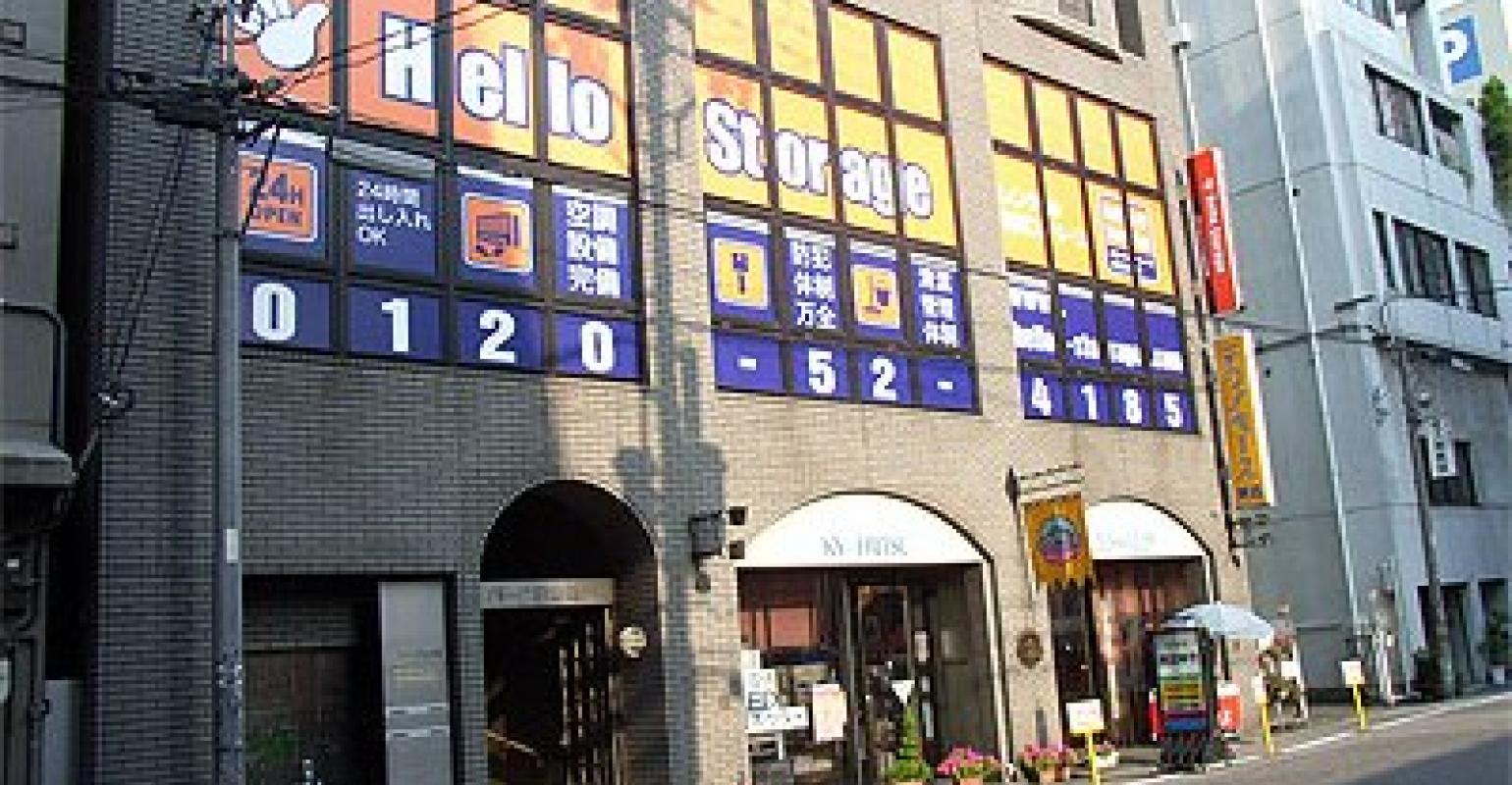 The president of Quraz, Japan's largest owner and operator of self-storage facilities, discusses the state of the self-storage market in the country, its big industry players, unit sizes and rates, business models, and how it all compares to the U.S. market.

On a recent visit to a self-storage conference and tradeshow in Las Vegas, it was clear most participants knew little about Japans self-storage industry. That wasnt necessarily a surprise. A total of zero U.S. storage operators are doing business in Japan. However, I was surprised at the degree of curiosity and interest whenever I was able to engage in conversation about the Japanese industry.

I also found it interesting that many U.S. operators are wrestling with some of the same issues facing Japanese operators:

Perhaps the markets are more similar than any of us realize. The following is an overview of self-storage in Japan and a comparison of the U.S. and Japanese markets.

In comparison to other self-storage markets in the world, Japans is significant as measured by revenue but relatively young and undeveloped as measured by saturation (see the accompanying table).

For the last decade, storage supply has been growing, and it continues to grow by roughly 10 percent per year, based on the 2010 Japanese self-storage supply survey conducted by operator Quraz as well as information published by other large self-storage players. Growth has generally been fueled by an improvement in the quality of storage facilities and an increased awareness of that better quality. Between the third quarter of 2008 and the third quarter of 2010, unit supply grew 19 percent. The top five competitors, identified accompany chart, represent 60 percent of the market. 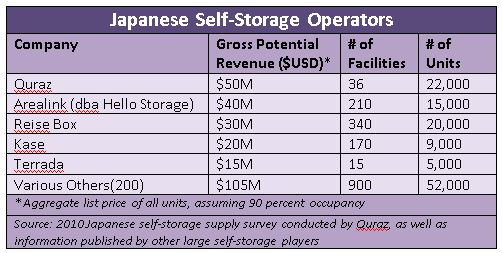 In terms of industry lifecycle, it might be useful to compare the stage of the Japanese storage market in 2011 to that of the U.S. storage market in 1970. Specifically, saturation was less than 0.5 percent in the United States, maybe only slightly more than Japan at present day (0.2 percent). It remains to be seen if saturation in Japan will approach U.S. levels, although growth rates are similar to those of the United States 40 years ago.

The fundamental nature of the storage product and its use is, not surprisingly, quite similar between Japan and the United States, that being space, rentable on a month-to-month basis, to store personal property outside of the home or office. However, there are several product and business-model differences that are important in understanding the Japanese market.

There are three primary reasons for the difference in size. First, Americans are much heavier consumers than Japanese. They simply buy and have more and bigger stuff. Second, the average living area per household in Japan is just 1,020 square feet, based on information from the 2003 Housing and Land Survey by the Japan Ministry of Internal Affairs and Communications. In Tokyo, homes are much smaller, often only 300 to 500 square feet. Given the limited living space, consumers will often use a 20-square-foot self-storage space as an extra closet or extension of their homes.

Finally, storage-rental rates are simply much higher in Japan, due in part to the fact that real estate in general is more expensive, compounded by the fact that storage facilities tend to be located in more densely populated urban areas in Japan. Monthly rental rates in Japan average approximately $6 per square foot, which is four to six times average U.S. rates. Its simply more difficult for consumers to afford a 100-square-foot storage unit in Japan. Simply put, Japanese consumers choose smaller storage units for the same reasons they choose smaller living areas.

The top three Japanese self-storage operators, comprising nearly 50 percent of the market, each pursue different business models. Quraz generally pursues a conversion model whereby it purchases under utilized or misplaced office properties and converts them to self-storage facilities. This is the most similar to models in other parts of the world, including the United States, whereby the operator also owns the assets.

Arealinks model is generally to lease single or multiple floors in under utilized office buildings, install storage units, and sublet the space to end users. This leasing model is the predominant storage business model in Japan, due in part to the relatively high price and low availability of real estate in urban areas.

Reise generally pursues a third model whereby landowners contract with the company to install a two-floor self-storage facility, with Reise managing the facility on behalf of the owner. This model might be similar to the third-party management services offered by some of the larger U.S. operators. Approximately 25 percent of storage capacity in Japan is owned by the operator, 50 percent is leased by the operator, and 25 percent is managed by the operator.

Excluded from the above Japanese self-storage market statistics is outdoor, container storage, which operates using something similar to a marine or shipping container. Several operators, including Arealink and Kase, offer container storage to businesses and consumers who do not require the safety and security of an indoor facility.

Over the past several years, the growth in container-storage capacity has appeared to slow significantly, likely due likely to two reasons: a wider awareness of the benefits of indoor self-storage, and the fact that containers have come under increasing scrutiny as often being noncompliant with various building codes. Additionally, there is generally a poor consumer perception about the safety and quality of container sites. Many indoor self-storage operators (myself included) believe container sites harm the perception of self-storage in Japan.

The self-storage industry in Japan is growing and is, in many ways, similar to the U.S. market. Perhaps Japanese operators will someday enjoy the same level of success enjoyed by their U.S. counterparts. They share many of the same challenges, and face an equally bright future.

Steve Spohn is the president of Quraz, Japans largest owner and operator of self-storage facilities. Spohn has been living and working in Tokyo for nearly four years. He can be contacted at [email protected] .